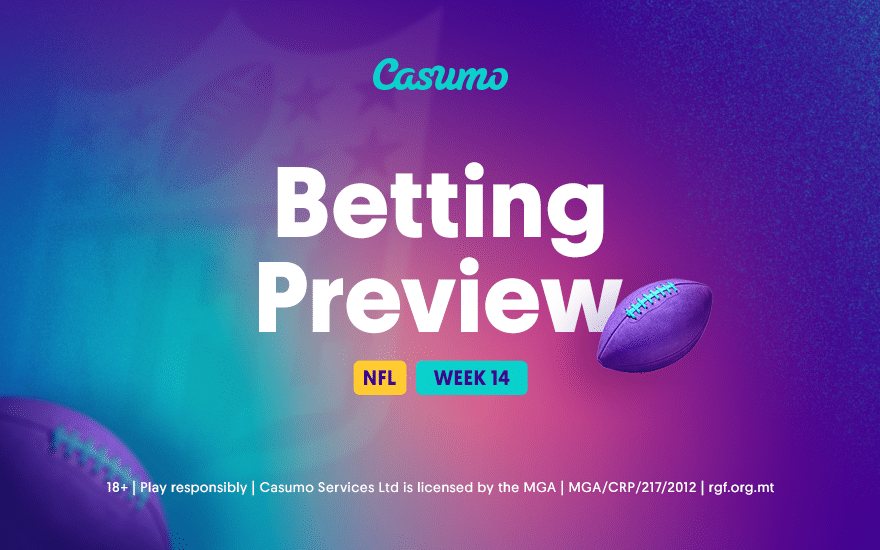 The NFL season is heading into week 14 and it is certainly crunch time. Sunday is a bumper day of fixtures with 13 matches on. Among the available games to watch that we will preview are the Los Angeles Rams v New England Patriots; Indianapolis Colts v Las Vegas Raiders and; Kansas City Chiefs v Miami Dolphins.

Few would have thought only a matter of weeks ago that the Rams would be where they are now (top of the NFC West). Their record stands at 8-4 and with a crucial run of games before the playoffs, they are on form. The Patriots will represent a tough test for the Rams, who will need to be solid defensively to take the win.

Jared Goff shone in Week 13 when he made 78% of his completions and had no turnovers in the Rams’ 38-28 victory over the Arizona Cardinals. Darrell Henderson will also have to step up his game as he only produced three carries last week and he has failed on numerous occasions to carry the ball 20 yards or longer.

As mentioned previously, the Rams will come under scrutiny against the Patriots. But from a Patriots perspective, they are hoping to reach the postseason once again and aside from Cam Newton, corner-back J.C. Jackson will need to put his recent woes behind him. While he has been consistent with his big plays, he has struggled in other areas of his game.

The Patriots’ record stands at 6-6 this season and they were ruthless against the Los Angeles Chargers last weekend, as they stormed to a 45-0 victory. The Pats didn’t let up at all and Gunner Olszewski stood out with his kicking game. Perhaps a punter could be the difference between the Pats and the Rams.

The Colts – who are 8-4 for this season – will be looking to build on their 26-20 win over the Houston Texans last weekend when they face the Las Vegas Raiders on Sunday. In particular, pass-rusher Justin Houston is hoping to put his poor form behind him. Houston, who has 7.5 sacks to his name this term, needs three more to join the 100-sack club.

Colts injuries piling up ahead of Raiders clash

For the Colts, the injuries are mounting up at the wrong time. Eight players sat out practice on Wednesday, which included Denico Autry, Trey Burton and Anthony Castonzo (knee). Burton and Houston were given a rest day, but for others, it could be a race against time to be fit to face the Raiders. Defensive lineman Tyquan Lewis (hip) could be touch and go.

Similarly, there were plenty of players who sat out or didn’t participate in Wednesday’s practice session for the Raiders. Among them were Johnathan Abram (knee) whose involvement was limited, as was Maurice Hurst Jr. (calf). However, wide receiver Nelson Agholor (ankle) gave the Raiders a boost as he took part in a full training session, as did Devontae Booker (back).

The Raiders are back in Las Vegas for three games at the Allegiant Stadium and with the visits of the Chargers and the Miami Dolphins to come, the game against the Colts is huge. With a 7-5 record, the Raiders will be feeling confident and as far as the head-to-head goes, the Silver and Black are 9-7 up against the Colts.

The Chiefs – who are 11-1 this season – have put up the yards and more often than not, have surpassed the 300-yard mark in games. Although they failed to do this in the 43-16 victory over the Denver Broncos, the Chiefs have eclipsed the 400-yard mark six times. In total, the Chiefs lead the offensive stats as they have put up over 5,000 yards this campaign.

Whereas for the Miami Dolphins, the game against the Chiefs will be a benchmark and will show how far they have come. And Dolphins defensive backs coach Gerald Alexander is under no illusions about the task facing his side. He said: “For us, we’ve just got to play our brand of football and obviously this is a very talented offense, really on all levels.”