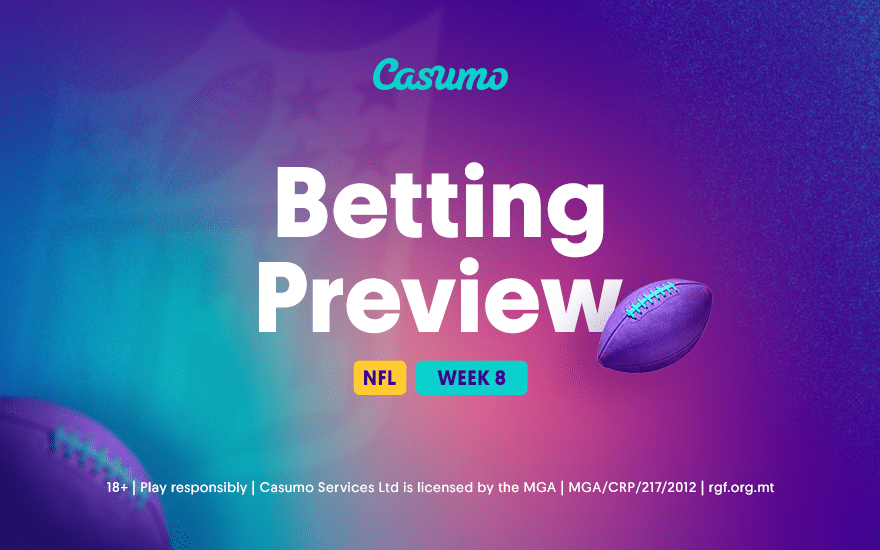 An exciting NFL weekend is here!

The Buffalo Bills have been in exceptional form so far this season and they have a chance to heap further pressure on the rather lackluster New England Patriots. After ending their wretched run with an 18-10 victory against the New York Jets last weekend, the Bills will be buoyed by the result and spirits will be high. Better still, they won’t have to worry about running into Tom Brady who was a perennial thorn in their side when he was with the Patriots.

Bills in uncharted territory after being labelled favourites against Patriots

Recent history has dictated that the Bills have struggled when they’ve come up against Brady on the other side of the line. But with a 5-2 record this term, the Bills will arguably take some stopping. Quarterback Josh Allen was rampant against the Jets as he threw over 300 yards for the fourth time this season. In doing so, he equalled the number of 300-yard passing games the Bills had managed in the previous seven years combined. Allen took delight from his display and particularly liked the way his side moved the ball around.

While there have been some inconsistencies in attack for the Bills, Allen has been an outstanding performer and he is only the third quarterback in history to gain 2,000+ passing yards, 16+ touchdowns and three or more rushing touchdowns in the first seven games of a season. The Bills are as short as -200 with Casumo to claim a win (including overtime), while the Patriots are outsiders at 33/20 to end their bad run of form which has seen them lose their last three in a row.

If past history is a good indicator, then all signs point towards a Patriots victory. Last season, the Patriots defeated the Bills for the 27th time as they ran out a 16-10 winner on the road and claimed a 24-17 victory at home. Under Bill Belichick, the Patriots enjoyed 15 consecutive wins over the Bills from 2003-10. Sunday’s clash will represent the 121st meeting between the two franchises. The Patriots have a stranglehold over AFC East teams and since 2001, they boast the best record in the division with a 92-25 (.786) mark against AFC East opponents.

Tale of the tape between the Bills and the Patriots

Ahead of a tantalizing encounter, it is always exciting to see how the two sides match up. Clearly, the Patriots aren’t where they should be and the 2020 stats show they are well off the pace. Taking the total yards stats as a guide, the Patriots have gained a total of just 2,113 yards whereas the Bills are out in front at 2,637. Although the Patriots have recorded 76 wins over the Bills, we don’t think the Patriots will go the distance and have priced the game at 950 to go into overtime.

#Patriots have been lost this season without Tom Brady.

Belichick is struggling with his team on both sides of the ball. pic.twitter.com/NGtHVpos3U

Panthers and Falcons in midst of big rebuilding jobs

The Atlanta Falcons and Carolina Panthers represent two franchises that have nosedived at the wrong time and they face big rebuilds in the coming months. With a combined record of 4-10, both franchises are out of sorts and they face an uphill battle to reach the playoffs. That said, the Falcons staged a big comeback last year when they won six of their final eight games to close 2019. But head coach Dan Quinn and GM Thomas Dimitroff were the victims as they were duly fired.

Four years may have passed since their devastating Super Bowl defeat against the Patriots, but the mental scars of that loss still appear to be weighing heavily on the Falcons. Since 2016, they have slumped to a 25-30 record and they haven’t made it to the postseason round since 2017. Top-tier players like quarterback Matt Ryan and wide receiver Julio Jones are in danger of being cut loose. Casumo is siding with the Panthers as they are -143 to win while the Falcons are 115 to pull off a victory.

The Panthers may feel they have been in freefall and their downturn seems to mirror that of the Falcons. But more significantly, the Panthers have already tasted success against the Falcons and that bodes well going into this clash. Only last month, the Panthers pounced on the rather listless Falcons with the Panthers scoring 20 unanswered points in the first half before grinding out a 23-16 victory. If they can win on Sunday, they will be on the fringes of the play-offs.

The Panthers have had it tough, but there have been some rare highlights, most notably the emergence of Teddy Bridgewater. He has stepped up to the mark and performed very well. Although the Panthers have a 3-4 record, they’ve given the top teams a run for their money and every time they have fallen, it has come against a team that is .500 or above. There are some question marks over the fitness of a few players, so they’ll need a big team effort to get their season back on track.

Christian McCaffrey’s return will be a big boost for Panthers

After sustaining an ankle injury in Week 2, there were fears that Christian McCaffrey would be forced to sit out the clash against the Falcons. But the running back is closing in on a return and before his injury, he was in fine form as he produced 223 yards of total offence and contributed four touchdowns in seven quarters. Panthers head coach Matt Rhule was tight-lipped over McCaffrey’s return, but should McCaffrey feature, he will give the rushing attack more confidence.

Whereas McCaffrey’s absence has been sorely felt by the Panthers, the Falcons will be looking to Matt Ryan to capitalize on the Panthers’ shortcomings. With the Panthers playing without Pro Bowl co-captain Kawann Short for the entire campaign, Ryan has a chance to take advantage. The Panthers have been rather muddled with their tactics and it is no surprise that they are 13th in the league for defensive stats. The 415 yards they conceded against the New Orleans Saints is definitely a worrying statistic for their fans.