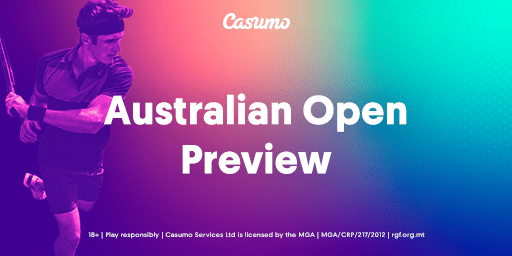 Anticipation levels for the Australian Open are reaching fever pitch. All eyes in the men’s draw will be on world No. 1 Novak Djokovic and whether he can get his hands on a record-extending eighth title. The Serbian – who has 17 Grand Slam titles to his name – beat Dominic Thiem in five pulsating sets in Melbourne last year and should the 33-year-old triumph again, he will take a step closer to Rafael Nadal and Roger Federer, who holds the joint record for the most Slams won in the men’s game in the Open Era (20).

While the draw has not been made yet, many will expect Djokovic to make light work of the field in the early rounds. Daniil Medvedev and Dominic Thiem – who won his first Slam at the US Open in Flushing Meadows last September – are serious contenders to thwart Djokovic. Meanwhile, Andy Murray – who has suffered many heartaches in Melbourne with five runner-up finishes – has been awarded a wild card. Whether he can have a final hurrah remains to be seen!

While the players will have to get their heads around quarantining and abiding by COVID restrictions before the tournament begins, perhaps one of the biggest elements will be the heat. The southern hemisphere is currently in the grip of summer and in Melbourne, temperatures can surpass 40C on the Rod Laver Court. Players will need to regularly drink fluids and certain players will want to win quick and cheap points on their serve as opposed to trading long rallies from the baseline.

One of the biggest talking points is how the Next Generation and the more established stars can dethrone Djokovic. Zverev, for example, who won two titles last year, reached the semi-finals of the Australian Open. While he had yips on his serve in the run-up to the tournament 12 months ago, the German is a vastly improved player and could go deep Down Under once again. There will also be a spotlight shone on Stefanos Tsitsipas, who will be looking to make more inroads after exiting at the third round stage against Milos Raonic.

It seems likely that Djokovic and Nadal will be kept apart in the Australian Open draw. If so, they may not meet until the final. The two gladiators went toe-to-toe for nearly six hours in the final in 2012. Both men were left completely drained and could barely stand up at the trophy presentation ceremony. Djokovic and Nadal have met 56 times on the ATP Tour and Djokovic shades the head-to-head 29-27. But Djokovic will want to avenge the crushing straight-sets defeat in the French Open final to his Spanish nemesis last year.

What will be most noticeable about this year’s Australian Open is that Roger Federer will be absent. The Swiss maestro had played in Melbourne 21 years on the trot, but after undergoing knee surgery last year, he’s not quite ready to return to the circuit. Federer has referred to the Australian Open as the ‘Happy Slam’ and he has triumphed on six occasions in Melbourne. The 39-year-old is a long-term fan favourite and as he’s in the autumn of his career, the Melbourne patrons may not get another chance to see him at the Australian Open.

While Roger Federer won’t be lifting the Australian Open this year, doubles expert Todd Woodbridge thinks Federer isn’t finished just yet and that he still has another Grand Slam in him. It is likely that Federer’s priorities will shift in an Olympic year and Woodbridge thinks it is the hallowed turf at Wimbledon where Federer is most likely to triumph for a ninth time this summer. He said: “Wimbledon is the major that I see him being able to win at this stage of his career.”