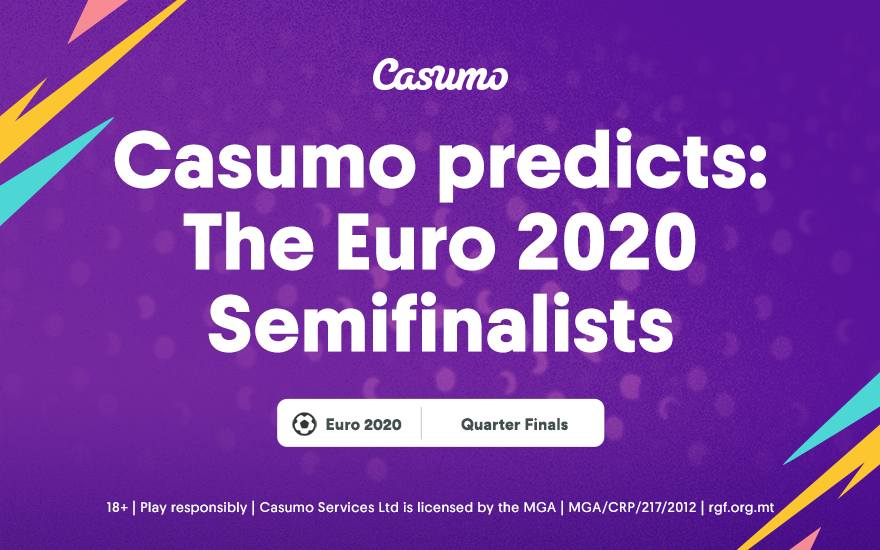 Confirmed: football’s coming home. That’s right, with the remainder of Euro 2020 (semi-finals and final) being held at Wembley Stadium in London, football is returning to its place of birth — England winning on home soil would just be an added bonus!

However, before we get excited about Sunday’s final, we must first turn our attention to the semi-finals, where Spain and Italy will meet on Tuesday night in what looks set to be the tie of the round, before England clash with the surprising member of the last four, Denmark, on Wednesday night.

Given that Euro 2020 has lived up to its expectations thus far, with a record number of goals, shock knockouts and tons of drama, there is a lot of expectations ahead of the semi-finals, and there’s no doubt that there will be another twist in the tale or two before the tournament is out.

So, without further ado, read on as we take a look at the two semi-final clashes and asses the chances of the four teams involved…

This mouth-watering encounter is one we have become somewhat accustomed to at the European Championships, and it rarely disappoints. For the fourth Euros in a row, Spain and Italy will go head-to-head. The Azzurri took the bragging rights at Euro 2016, where they knocked La Roja out in the last 16 with a 2-0 victory at the Stade de France in Paris, and you would expect the Italians to win again this time.

It’s hard to forget that 4-0 thrashing inflicted on Italy by the Spanish in the final of Euro 2012. However, it’s fair to say that Luis Enrique’s current crop are a shadow of that Vincent del Bosque tiki-taka powerhouse, and with Roberto Mancini’s Italy unbeaten in over 30 games, the Azzurri will be out to book their place in the final.

After winning all three of their group games without conceding a goal, Italy’s toughest task of this tournament so far was in the quarter-finals, where they faced Roberto Martinez’ Belgium, who are No.1 in the FIFA World Rankings. However, goals from the in-form Nicolò Barella and Lorenzo Insigne gave Italy a two-goal cushion, and despite Romelu Lukaku firing home from the spot, Italy were able to see the game out in the second half and secure their place in the last 16.

Spain, on the other hand, have mostly left a lot to be desired in this tournament, and given their, at times, lacklustre performances, their place in the semi-finals could be considered a shock. Enrique’s men drew their opening two matches with Sweden and Poland before finally finding their rhythm in a 5-0 win over Slovakia. They put five more goals past Croatia in a 5-3 win after extra-time to secure their place in the quarter-finals, where they faced Switzerland.

Having knocked out France, the Swiss were never going to be a walk in the park for Spain. But La Roja looked like a deer in highlights going forward once again, with a deflected Jordi Alba effort from long-range needed to break the deadlock, while at the back, there was a mix-up between Aymeric Laporte and Pau Torres for Switzerland’s goal.

Given how defensively sound Italy have been, and the ruthlessness they have shown in attack, there should only be one winner of this game!

When England knocked Germany out in the last 16 with a 2-0 victory at Wembley, pundits and fans alike were quick to point out Gareth Southgate’s favourable run to the final, and after breezing past Ukraine with a comfortable 4-0 victory at the Stadio Olimpico in Rome, confidence will be at an almighty high within the England fold.

With performances on a different level to their mediocre-at-best outings in the group stage, where they beat Croatia and the Czech Republic 1-0 either side of a bore draw with Scotland, alongside the fact that the match is taking part in front of a 60,000-strong crowd at Wembley, it’s no surprise that England are the heavy favourites to win this tie.

However, Denmark cannot be discounted that easily. Yes, with victories over Wales and the Czech Republic in the knockout stages, England will be their toughest task thus far. But, Kasper Hjulmand’s side can take confidence from their recent Nations League results against Southgate’s side, drawing 0-0 in Copenhagen before winning 1-0 at Wembley.

What the Danes do need to be wary of is a red-hot Harry Kane. After failing to find the net in the groups, the Tottenham Hotspur striker has three goals in his last two games, and he is notoriously difficult to stop when on such form.

The same can be said about Kasper Dolberg. England are yet to concede at the Euros, but like Kane, the Nice forward boasts three goals in the knockout stages and he will be making sure that Harry Maguire and John Stones are on their toes on Wednesday night.

Whilst it certainly won’t be another 4-0 victory for England, the Three Lions should prove too strong for Denmark.