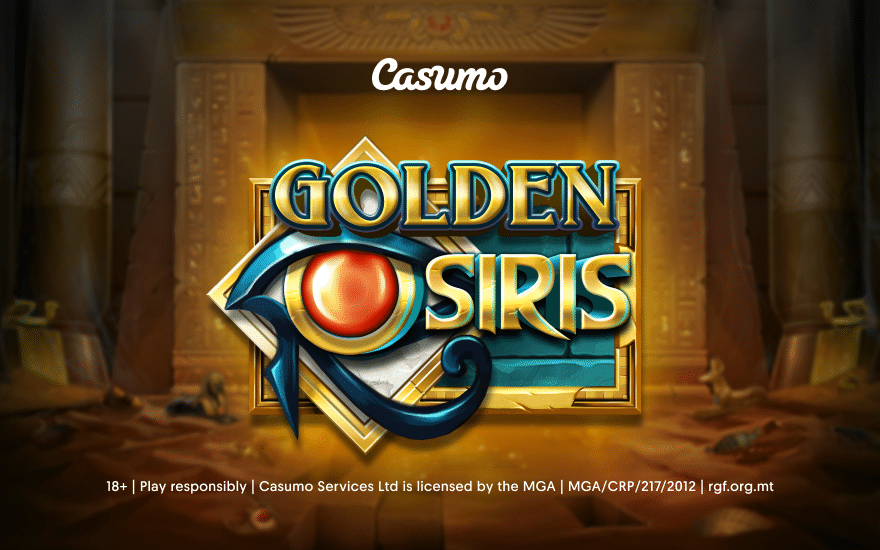 All eyes on the mighty pyramid

Golden Osiris, a golden new release is now spinning exclusively at Casumo – with added jackpots! You can now try this shiny new game for the first time at Casumo whilst grabbing your chance to win a jackpot. Hunt for ancient Egyptian treasures with hidden wilds that can reveal multipliers of up to 10x. Fill the Pyramid Charger to trigger a randomly chosen expanding symbol that might lead to bigger wins. With 3 scatters you activate 5 Free spins where you play with a fully charged Pyramid on each spin and 30x multipliers.

Every single spin you make in this game will also automatically give you the chance to win a Mini, Major or Mega Jackpot – not too shabby!

You can unlock Golden Osiris’ ancient secrets exclusively at Casumo for the next 2,5 weeks, until the 16th of December.

What Golden Osiris is all about

Cascading reels are central to the action in the Golden Osiris slot. They could potentially bring more extras into play including wilds with multipliers and charged symbols that expand to join adjacent clusters. Cherry on the cake is the Golden Osiris free spins feature.

The aim of Golden Osiris is to form clusters of 5 or more matching symbols on the 7×7 grid. When a winner is created, those winning symbols are blasted off the reels and a cascade follows with new symbols dropping in to replace them. Cascades keep on coming until no new winning combination is created.

Located behind standard symbols is a quartet of hidden wilds. The wilds become active when a symbol makes up part of a winning cluster and is removed from the grid. The wild substitutes for everything except for the bonus scatter and could come with a multiplier of up to 10x. Up to 6 wilds are added to the grid with each new cascade.

The first charge comes with a 3x multiplier, additional recharges could bump it up to 30x.

The Free Spins feature is triggered by landing 3 scatters on the same spin. Land 2 scatters on the same base game spin and the symbols adjacent to them are destroyed. A new cascade follows, giving you another opportunity to find the third scatter you need to trigger the free spins round.

Golden Osiris is also one of the qualifying games in our Jackpot Blizzard, with over €2 million worth of exclusive jackpots that could drop on any spin!

If you’re ready to let Osiris guide your spins AND join our Jackpot Blizzard then all you need to do is log in to your account (or sign-up for a free account). Select the Jackpot Blizzard promotion and start playing Golden Osiris.