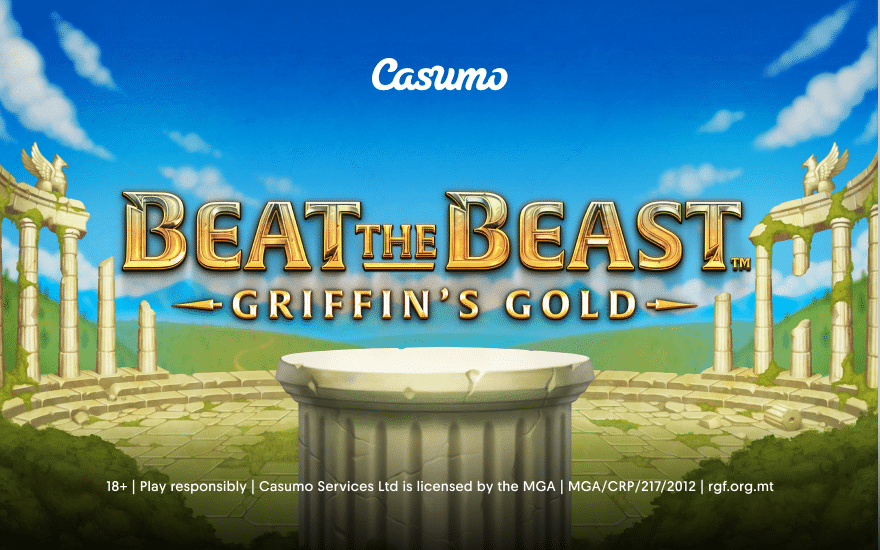 Beat the Beast: Griffin’s Gold, only at Casumo

The release of the final beast: Griffin’s Gold

Beat the Beast: Griffin’s Gold is exclusively available to our Casumo players for the next two full weeks! The fifth and final edition of Thunderkick’s beastly slot series is set against an Ancient Greek background. Here you’ll face yet another legendary creature.

The fifth edition of Thunderkick’s ‘Beat the Beast’ series, stars a Griffin, a legendary creature with the head, beak and wings of an eagle, the body of a lion and the tail of a serpent or scorpion. Its origin lies somewhere in the Middle East where it’s found in the paintings and sculptures of the ancient Babylonians, Assyrians and Persians. In Greek mythology, they represented wisdom, strength, and trickery. They were also believed to hoard and protect gold and line their nests with it, killing anyone who dared to steal it from them.

Seems like you wouldn’t want to mess around with these Griffins!

What Beat the Beast: Griffin’s Gold is all about

Griffin’s Gold is a 3×5 video slot with 9 pay lines. The game features Roaming Wilds, Wild Multiplier, and a Bonus Game with free spins.

Let’s have a closer look at what this game is all about, shall we!

In the Bonus Game, the Roaming Wild symbol substitutes for any other symbol and will stay on the reels for the remainder of the Bonus game. Before each new free spin, it will roam to an adjacent position. A spin with one or more Roaming Wild symbols included in 1 or more winning paylines will award 1 extra free spin.

Three or more Griffin Emblem symbols trigger or retrigger the Bonus Game, awarding 10 new free spins. The Bonus Game is played with the same bet as the spin that triggered the Bonus Game.

If you’re ready to battle for gold with the mythical Griffin then all you need to do is log in to your account (or sign-up for a free account). Find the slot in our Game Browser and have a roaring time!