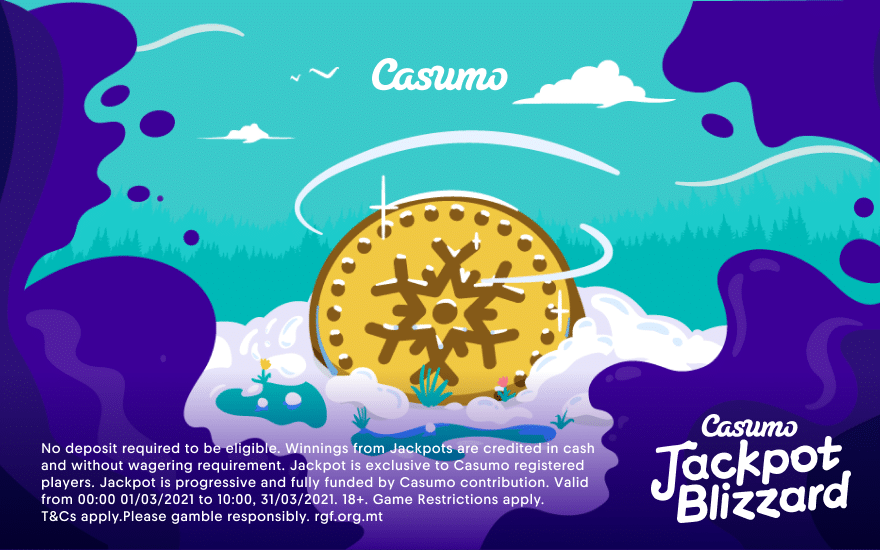 The Jackpot Blizzard has been extended!

We’ve never been this excited about bad weather! Our Jackpot Blizzard has been blazing for quite some time and will be blowing on for a while longer. That’s right, this storm ain’t over yet! You get to continue playing some of the most popular slots with added jackpots at casumo.com. This means that even more jackpots will be dropping into the laps of lots of happy Casumo players. Hooray-yay!

Scroll further down for our Jackpot Blizzard Weekly Wins 2021 Roundup and the wins of the previous week.

Have a look at all the Jackpots that dropped throughout the month of February:

Of course we still have 24 amazing games that are participating in our Jackpot Blizzard, but for the extended period, we made a couple of tweaks and swapped the real Christmassy ones for some brand new releases! Of course you get to play all of them with added jackpots, only at Casumo. Have a look at the list:

The Sword & The Grail

John Hunter & the Tomb of the Scarab Queen

Here’s how to join the Jackpot Blizzard!

Are you ready to join the exclusive fun? All you need to do to join our Jackpot Blizzard is register an account – if you haven’t already done so. Log in, select Jackpot Blizzard from the Promotions tab, and pick one of the qualifying slots to play with added jackpots.

Sizzle and spin: Hot Reels 24 is here!
PromotionsToday
The Most Wonderful Time of the Year at Casumo: 31 Days of Xmas
Promotions37 Weeks ago
Introducing: Casumo Jackpots, our 4-tier Progressive Jackpot
Promotions52 Weeks ago
Welcome bonus to all new players