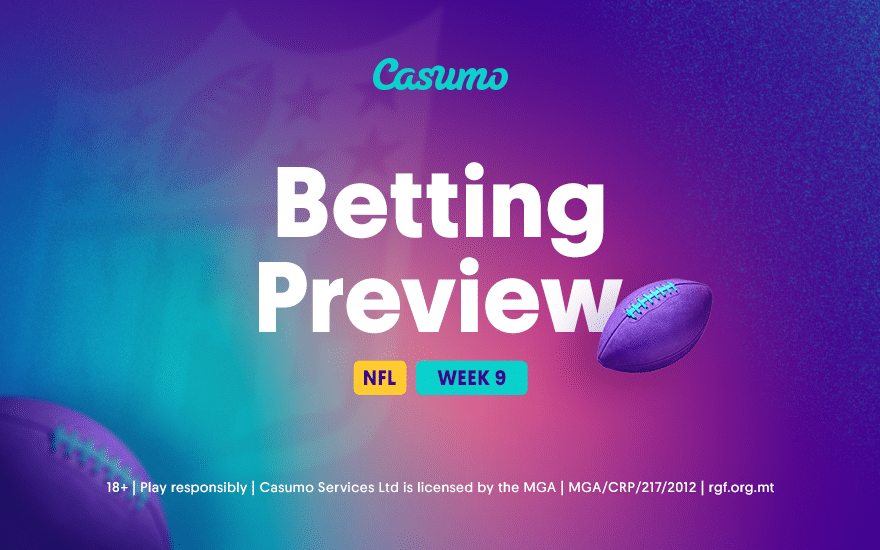 NFL hotting up ahead of week 9

As we head into week 9 of the NFL, there’s plenty for fans to sink their teeth into. We’ve got some fabulous clashes, including the San Francisco 49ers versus the Green Bay Packers and the Tampa Bay Buccaneers versus the New Orleans Saints. Things are bubbling up nicely and we may have a greater idea as to who might make the play-offs.

Although there have been rumours that Green Bay Packers’ clash against San Francisco 49ers could be moved from Thursday to Monday due to the positive COVID-19 test of running back AJ Dillon, the Packers are still going full steam ahead with their preparations. While this is a setback, they aren’t letting this disrupt their plans and head coach Matt LaFleur insists his players have been sensible and diligent about adhering to social distancing protocols.

The Packers – who are top the NFC North with a 5-2 record – will be eager to get back on track after a hiccup against the Minnesota Vikings. A 28-22 reverse has left the Packers scratching their heads over the deficiencies of their running defense. Vikings star Dalvin Cook turned in an incredible display to help the Vikings to victory. But LaFleur bemoaned a lack of intensity and for missing too many balls as to what contributed to the Packers’ defeat.

Injuries piling up for the San Francisco 49ers

The injuries have been mounting up as just the wrong time for the 49ers. Quarterback Jimmy Garoppolo (ankle) and George Kittle (foot) face long lay-offs. Garoppolo could be out for up to six weeks, while Kittle could be sidelined for eight weeks. And the injuries came off the back of a 37-27 defeat to the Seattle Seahawks last weekend as they were picked apart by Russell Wilson. Already bereft of edge rushers Nick Bosa and Dee Ford, as well as No.1 receiver Deebo Samuel and two key running backs, they face a tall order against the Packers.

What can the 49ers draw comfort from ahead of the Packers clash?

It may seem like there is little to get excited about from a 49ers perspective. Nevertheless, there was something to draw comfort from after the loss against the Seahawks. The Niners capitalized when the Seahawks took their foot off the pedal and a lot of that was down to Nick Mullens. Having replaced Garoppolo, Mullens went 18 for 25 for 238 yards and contributed two touchdowns. Although it didn’t make a difference, it was a healthy turnaround from the player who was pulled from the start against the Philadelphia Eagles in week four.

Where do the 49ers need to improve on ahead of the Packers clash?

One area of immediate improvement is pass blocking. Against the Seahawks, the 49ers were facing a side that had one of the worst records for pass rushes. But the Seahawks turned up the pressure and compiled three sacks. The 49ers couldn’t cope with the Seahawks, who made life extremely difficult with the speed of their blitzes and the eight quarterback hits. If the 49ers are going to stop the Packers, then they will need to ensure this area of their game is watertight.

The Tampa Bay Buccaneers have been flying this season and Tom Brady can take credit for that. Legendary quarterback Brady combined with Rob Gronkowski and then Mike Evans to give the Buccs a 25-23 win over the New York Giants. The Buccs had to make up an 11-point deficit but it was a thrilling victory nevertheless. This is a very exciting game on paper and it is very tight trying to call it!

Brady has been a man on a mission in the NFL and he has broken records left, right and centre. The six-time Super Bowl champion has overtaken the New Orleans Saints great Drew Brees for the career lead (561) in TD throws. But the Saints have shown a lot of determination in recent weeks. Head coach Sean Payton praised his side for displaying a ‘grit element’ in their 26-23 overtime victory over the Chicago Bears in their last outing.

The Saints have been able to grind out results with their past three victories coming by a margin of three points. They have been without receiver Michael Thomas since Week one while second receiver Emmanuel Sanders has sat out the last couple of games after testing positive for COVID-19. Defence has been their best form of attack and it won’t be easy for the Buccs to get through.

The New York Jets have had a torrid season to date and they are seeking to become the first team to avoid a 0-9 start to a campaign. They previously started a season 0-8 under Rich Kotite in 1996, but their struggles have been apparent. A 35-9 battering at the hands of the Kansas City Chiefs has left morale low in the Jets camp, but they have to respond quickly, otherwise they will end up in the history books for all the wrong reasons!

The New England Patriots haven’t been much better as they are 2-5 for the season and they have lost four games on the trot. 2020 has been a bizarre year so far for Bill Belichick’s men. Belichick reckons the high salaries paid out to the likes of Cam Newton has contributed to their downfall. Patriots, you imagine, will shade this one and Casumo are siding with them. Casumo has priced the Patriots as short favourites at 2/7 to beat the Jets and has rated the chances of the game going into overtime at 1000.

Costume of the year! The New York Jets dressed up as an NFL football team for Halloween! pic.twitter.com/VIuDznaYo5