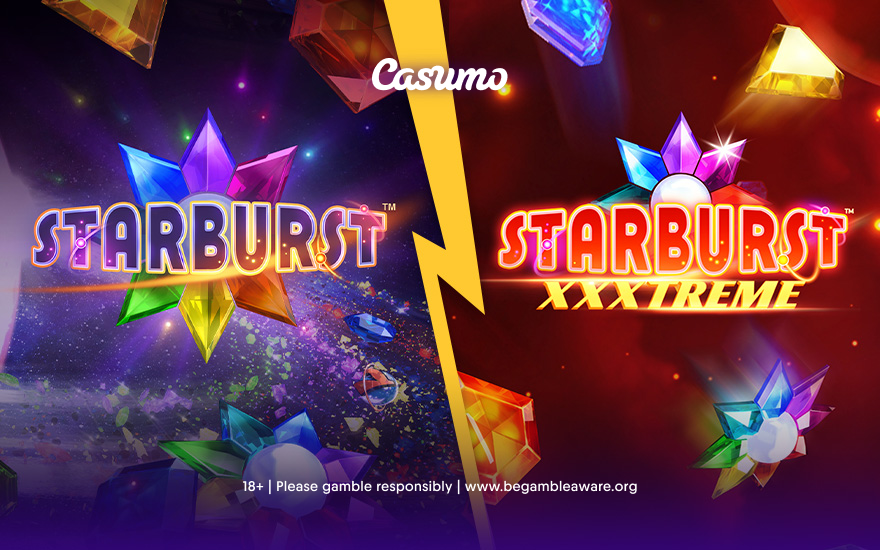 Bursting with color, bedazzling features, and innovative gameplay, it’s not hard to see why NetEnt’s Starburst games are so popular among slot-lovers. 2022 marks a decade since the original game’s release, and we’re taking a moment to appreciate the three members of the Starburst family: Starburst, Starburst Extreme and Starburst Slingo. Keep reading to learn more about the features of each of these popular games, all of which are available for you to play at Casumo.

Starburst: a star is born

The definition of a classic, Starburst has stood the test of time and then some since its release a full decade ago in 2012. According to some, it holds the title as the most popular online slot of all time. That’s right, we could be talking about the G.O.A.T. here — the Meryl Streep of slots. Set in outer space against futuristic electro beats, it takes you on a journey to the final frontier with planets and other celestial bodies floating beyond the reels.

This star-studded slot features the win both ways mechanic, where paylines can start either on Reel 1 or Reel 5 on each of the 10 paylines. Starburst has low to medium variance, meaning that on average you’ll get plenty of wins but they tend to be smaller (hit frequency is 22.65%).

Simple but captivating, this jewel in NetEnt’s crown features several different gem symbols as well as 7 Spheres and Gold Bar Spheres, the latter being the highest value symbol. During play, you’re hoping for Starburst Wilds, rainbow-colored stars that substitute for all other symbols on a payline. Land one of these shining stars and hear the bass drop as the entire reel goes wild, with Starburst Wilds populating to cover the entire reel and trigger a round of Free Spins that last as long as you keep landing Wilds.

Starburst Extreme, the high-payout sequel to the original, took the world by celestial storm when it was released in July of 2021. As you’d expect from the name, it differs from its predecessor with increased volatility, upping the stakes with multipliers and max wins up to 200,000x.

Some things have stayed the same, including the visuals and general aesthetic of the original that most players agree can’t be improved. Like the first Starburst mission, the Starburst Extreme slot is all about Starburst Wilds. These kaleidoscopic symbols expand to cover an entire reel and trigger respins where, in this extreme version, additional wilds come with multipliers attached. Land more than one Wild on the same spin during re-spins to multiply the multipliers up to 450x. Another add-on is the Extreme Spins feature, which allows you to opt-in to guarantee one or two Starburst Wilds per spin for an additional 10x or 95x your stake, respectively.

Chief Product Officer at Evolution Todd Haushalter explained a little of the thinking behind the development of the Starburst sequel:

“Everyone knows the Starburst™ name. It’s been a slot favourite for years. We’ve been working hard to keep those classic features that make the game so popular, and the team have done a great job at incorporating them into an XXXtreme version that will appeal to current, as well as the next generation, of players.”

Starburst Extreme pays tribute to its roots without shying away from innovation. Already a rising star, if it stays its course it could end up as admired as the original Starburst slot.

Slingo is a popular type of casino game that combines elements of the most popular slots with classic Bingo. The game is played on a 5×5 grid with slot reels placed directly below the final row. Games last 10 spins (not counting bonus spins or extra paid spins). Get a Slingo by matching the numbers you spin on the reel to the ones on the grid and move up the pay ladder.

Slingo Starburst is a bedazzling experience. Mark off five adjacent numbers bingo-style to earn a Slingo. Each time you do, you move up the ladder for chances to win spins and purple gems that award instant cash prizes. Like in Starburst slots, the multicolored Starburst Wild guarantees turns an entire reel wild. Cover the whole grid with gold stars to climb the Slingo ladder all the way to the top with the help of the spins you win along the way!

Take Starburst, Starburst Extreme, and Starburst Slingo for a spin to get a feel for these glittery games before playing with real money. The free versions include access to the paytable and allow you to experience all the game features. Check out the Starburst Extreme demo below!

Find free demos to the other Starburst games by following the links to the game pages above, or search our game browser to find demos of thousands of your favourite games!

Jammin’ Jars 2: We Know You’ll Like Jammin’, Two
Casumo likes5 Weeks ago
The Gates of Olympus Open to Reveal a Legendary Slot from Pragmatic Play
Casumo likes12 Weeks ago
Crazy Time: the Flashy Live Casino Game Made for the Spotlight
Casumo likes14 Weeks ago
Welcome bonus to all new players