Cameo Inflation: Who’s earning the most since 2021? 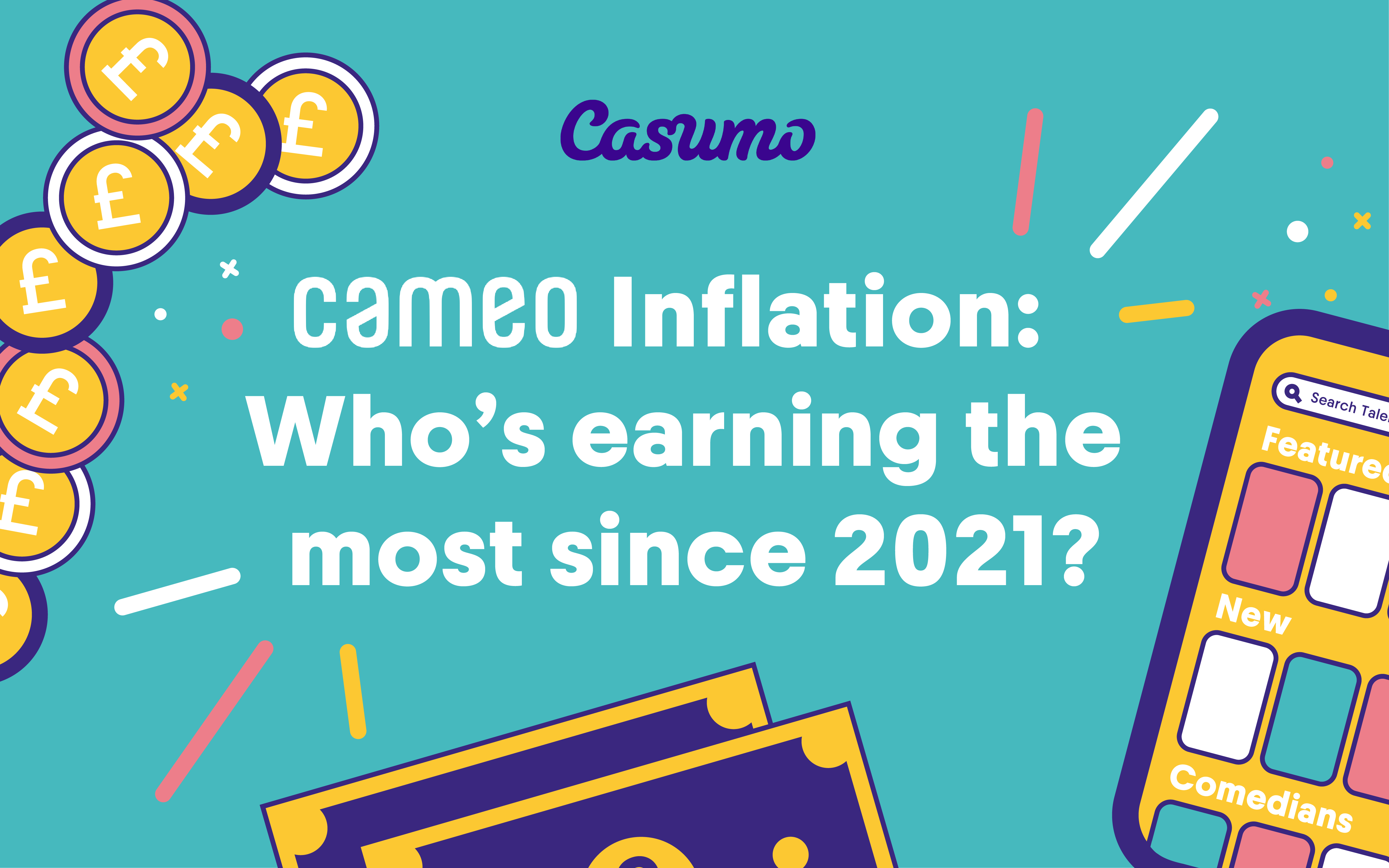 The celebrity video platform Cameo has boomed in popularity over the last three years, with more people requesting custom-made messages from their favourite celebs and more and more celebs enjoying the benefit of this lucrative side-hustle.

We’ve looked at just how lucrative Cameo is for its top earners and which celebs have increased their prices in the last year.

Harry Potter alumni Tom Felton (Draco Malfoy to Potterheads) now charges a whopping £455 for a video in 2022, which has increased 200% from £151.47 last year. According to his promotional video, the star offers shout-outs for birthdays and weddings and has a fan club run through the site. With a five-star rating from over 500 reviews, his fans clearly think it’s worth the cost.

Seinfeld actor Larry Thomas has also upped his rates in the last year by 85%. A video from the Emmy Award-nominated actor will cost you £113 this year, compared to £61.07 in 2021! Thomas has clearly been putting in the time on Cameo, with 1900 reviews so far.

Video game fans will know Downes from HALO – or his voice at least. The actor voiced Master Chief from the game and Star Lord from The Avengers animated series. A video message – including a pep talk if requested – will now set you back £75 – a 47% increase from £51.15 in 2021.

Fans of The Office US will know beloved actor Baumgartner as Kevin Malone from the hit sitcom. Baumgartner is another star capitalising on the Cameo boom, now charging £171 for a personalised video. That’s a jump of 15% from £148.43 in 2021. But with a whopping 4037 reviews and a five-star rating, The Office fans are evidently happy to pay!

NFL star Drew Brees has also upped his price by 66%, from £342.88 in 2021 to £570 this year. But this price increase is for good reason. Not only do you get a custom-made video from the New Orleans Saints Quarterback, but 100% of your money goes to the Brees Dream Foundation, which strives to improve the quality of life for cancer patients and provide care for children and families in need.

Another NFL legend who’s recently upped their prices is Super Bowl Champion Quarterback Brett Favre. A video from the sports star will now cost you £304, a 60% increase from £190.40 in 2021!

Famous for his successful BMX career and for hosting the MTV reality competition show The Challenge, T.J. Lavin is also cashing in on Cameo. You can buy a video from the star for £169, which is a 48% increase from the £114.51 he charged in 2021.

Skateboarding legend Tony Hawk is another athlete enjoying the benefits of Cameo. If you grew up watching his skateboarding videos (or playing the iconic Tony Hawk’s Pro Skater video games) and want a personalised message from the pro himself, it will now set you back £228, a 20% increase from £190.29 in 2021.

If you’re a baseball fan, you’ll know Pete Alonso (aka ‘The Polar Bear’) as the first baseman for the New York Mets. Alonso upped his Cameo price to £228 this year, a 20% jump from £190.40 last year. This athlete is another charitable giver, putting some of the proceeds towards his charity Homers for Heroes, which raises money to thank local heroes in communities.

Iconic comedian and Sex and the City star Mario Cantone (Anthony to SATC fans) is another celeb making good money from Cameo. Coinciding with the release of SATC spin-off And Just Like That, Cantone has upped his rates this year and now charges £150 for a Cameo – a big increase of 96% compared to the £76.34 it would have cost you last year.

Controversial comedian and actor Andrew Dice Clay has also upped his rates. Known for his brash, straight-talking manner, you can expect the same in his personalised messages to your friends and family. The Diceman will grant you a video for £349, a 53% increase from £228.25 in 2021.

Actor and comedian Anthony Anderson is best known for starring in the hit ABC sitcom Black-ish, amongst others. If you want a video from this American funny man, it’ll cost you £150 – a +31% increase from £114.51 last year.

Stand-up comedian and actor Cedric Kyles – best known as his stage name, Cedric the Entertainer – is another favourite on the Cameo platform. If you want to entertain your friends or family with a custom video this year, it’ll cost you £188 – +23% more than the £152.67 it was in 2021.

It may or may not surprise you that the divisive former mayor of New York is somewhat of a hit on Cameo. The politician and public figure is perhaps best known as a member of Trump’s personal legal team and his unwitting role in the latest Borat film. A custom video from him this year will cost you £247, a massive +116% increase from £114.18 in 2021. As they say, any publicity is good publicity…

One of the unlikely stars of Netflix’s lockdown hit Tiger King, Caroline Baskin has turned into a somewhat iconic figure over the last two years. Her popularity doesn’t seem to be waning either, which might be why if you cool cats and kittens want a personalised video from the animal rights activist today, it’ll now set you back £227 – a +100.11% jump from the £113.44 it would have cost you in 2021.

Cheryl Hole is an English drag queen who rose to fame on the hit show RuPaul’s Drag Race. The self-titled Mediocre Queen of Essex will give a fun custom-made video for fans for the price of £48. Reasonable by Cameo standards, but an +80% increase nevertheless from the £26.72 she charged in 2021.

Angela Deem found her fame on the American reality show hit 90 Day Fiancé. This reality star is making the most of her newfound fame on Cameo, where she now charges £94 for a personalised video. That’s a +64% jump from the £57.25 she charged in 2021!

YouTube OG Tay Zonday is making the most of his instantly recognisable voice on the Cameo platform. The Chocolate Rain singer has 1074 reviews on the site, so there is clearly high demand for his personalised messages. This might be why the star has bumped his prices up by +208% in the last year, rising from £30.53 in 2021 to £94 today!

Legendary American rapper, actor, and producer Ice T is another popular musician you can request a video from on Cameo. Whether you know him for his hip-hop career or his long-running acting stint on Law and Order, you can get a personalised message from the star – but it’ll cost you 69% more than it did last year. Now, a video will set you back a cool £450, compared to £266.42 last year.

If country music’s your bag, you might want to request a Cameo from Texan country crooner Aaron Watson. The musician has seen success with his videos, upping the price of a personalised message by 42% from £52.67 last year to £75 today.

Clearly, Cameo is a lucrative business for celebrities. Taking our list’s highest-priced celebrity, Drew Brees, as an example: at £570 a video, ten videos make him £5,700!

The price celebs charge for videos will be affected by their current level of popularity, but the success of the platform as a whole can be at least in part attributed to the pandemic. With lockdowns making birthday presents tricky, what better gift for a friend with a celeb crush or lifelong idol?

With the pandemic coming to an end, it’ll be interesting to see whether prices continue to rise for the platform’s most popular celebs.

For more news and insights, check out our other articles on the Casumo blog.