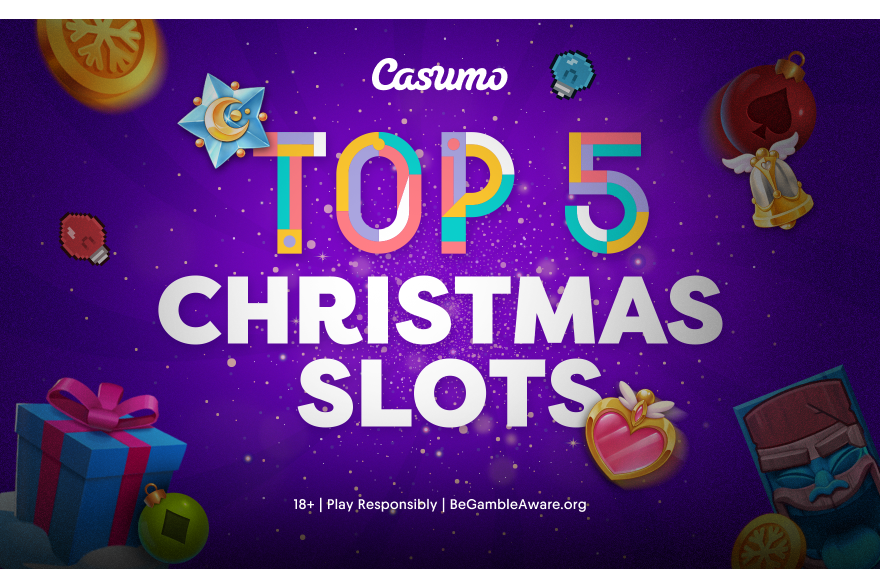 HO-HO-Holy Santa hat! Practise your carolling and shine the Christmas baubles, it’s that time of the year again. This holiday season we’ve gathered a Top 5 Christmas slots available from our game browser to help you get in that cosy, wintery, let’s-make-some-snow-angels kinda mood. Who knows, you might even land some jolly big wins.

Go ahead and have a look at our five festive favourites below plus a couple of squeaky new slot releases that might be right up your chimney. 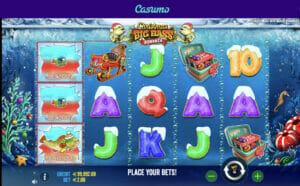 Forget about roasting chestnuts on an open fire, this Christmas we’re grabbing a fishing rod for some big bass fishing. Christmas Big Bass Bonanza is a christmassy take on a classic Pragmatic Play slot. They’ve kept the features and visuals you might already know and injected a good dose of Holiday spirit. You even get a jingly soundtrack to keep you in a festive mood as you spin. The setting of an icy lake surrounded by snow-capped mountains might also help getting you there though! The 5×3 reels are separated by bubbles (not baubles) that steadily ascend toward the surface of the lake. You’ll need three or more symbols to trigger a win, except for the Bauble, which requires two and rewards a payout of 200x your bet when all 5 appear on a payline. The maximum payout of this game is 2100x your total bet.

Catch a Big Bass for Christmas 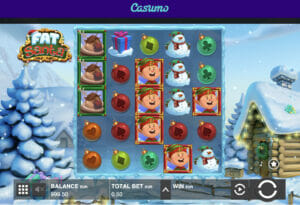 Join a very hungry Santa on the reels in this wintry looking slot by Push Gaming! Look out for his sleigh that could come flying across the reels to drop some extra Wilds (Christmas pies) onto your game play. It also features a Bonus Spins round during which the Santa Wild devours pies and increases in size to boost your winning chances with payouts of up to 6,405 times your bet. Ready… Set… Go-Ho-Ho! 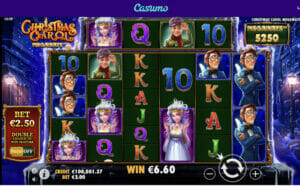 As you may have guessed by the name, this Pragmatic Play slot is based on the story of the infamous Ebenezer Scrooge, by Charles Dickens. The Christmas Carol Megaways slot has 6 reels against the backdrop of the snowy streets of London and offers up to 200,704 ways-to-win thanks to the Big Time Gaming Megaways mechanics. The slot also comes with a bunch of bonus features including tumbles and Extra Spins with potentially unlimited win multipliers. Essentially the latter is what the game is all about. In the Bonus Spins feature you get to pick between Bonus Spins and multiplier options. It starts with a multiplier of 10x, which increases with every tumble. The max. wins are 20,000 x your bet per spin. 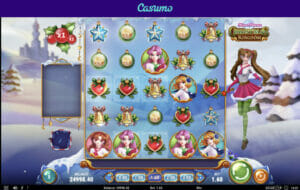 Moon Princess: Christmas Kingdom is a Play’N GO cluster pays slot in the same style as the Sailor Moon manga. It tells the story of magical animals, adventurous princesses, and a winter wonderland filled with Christmas vibes. The game features three animated characters: Love, Star, and Storm as well as a bunch of christmassy symbols including a Jingle Bell and Bauble. These symbols are where most of the game’s wins could come from, but the potentially biggest payouts are usually triggered by the game’s special features, including:
Cluster Pays
Increasing Multipliers
Wild Feature
Symbol Conversion Feature
Disappearing Symbol Feature
Trinity Respin
Bonus Spins
Wins are triggered when you manage to land three matching symbols on the reels and the highest payout is 15,000x your total bet. 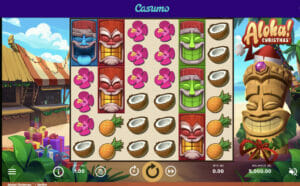 Let’s celebrate this holiday season, Hawaiian style! NetEnt’s Aloha! Christmas slot is a 6-reel, cluster pays game that offers plenty of holly-jolly goodies including mystery symbols, multiplier wilds and sticky win re-spins. If you manage to trigger the main feature of the game, you get to choose between its two Bonus Spins features. Either way you can’t really go wrong, because both award a combination of Bonus Spins and multipliers. Try collecting starfish to add even more Bonus Spins to your total. They’ll also remove lower paying symbols from the reels – jingle all the way! Aloha Christmas Edition sure is a real cracker of a game.

So there you have it, our Top 5 Christmas slots. Head over to our game browser to try them all and discover your favourites.

But HO-HO-Hold on, there’s more! We’d also like to highlight three brand new Christmas-themed game releases that will surely get you in that Holiday vibe. 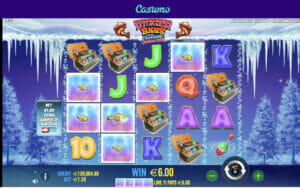 In the mood for some fishing, but the lake has frozen over? Fear not! In Bigger Bass Blizzard Christmas Catch you might still be able to catch some big ones.
This christmassy slot is played across 5×4 reels and includes a bunch of the iconic symbols, but with a wintery make-over. Three or more scatters will unlock the Bonus Spins round where you could collect instant cash prizes with the fisherman Wilds. If you manage to collect four you’ll enter the next round which re-triggers the spins and awards you with a potentially increasing multiplier. Put on your warmest Xmas jumper to celebrate The season in style with Bigger Bass Blizzard Christmas Catch. 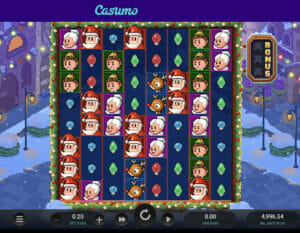 Santa’s Stack Dream Drop is an extra festive slot played on a 8×8 grid. Winning combos could be created through clusters of 5+ matching symbols, supported by Wilds, Re-spins, Bonus Spins, the Secret Santa Re-spin Feature and of course the Dream Drop Jackpots mechanic. The Dream Drop Bonus might be triggered
randomly before any normal spin. There are 5 jackpots that could potentially be won: RAPID, MIDI, MAXI, MAJOR or MEGA. In the Dream Drop Bonus you are presented with 15 options and the aim of the game is to reveal 3 of the same jackpots. Revealing jackpots is done by clicking on each option. Once 3 of the same jackpots have been revealed that prize will be awarded and the
Jackpot Round will end. 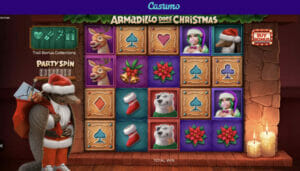 After the popular ‘Armadillo goes West’, the Spearhead Studios mascot returns in a fun festive sequel. This time Armadillo Does Christmas and he might just be even more generous than the ol’ Bearded Man himself! Each time the Whiskey bottle hits the reels, the Armadillo pours himself a shot. After 4 shots, in
the bestest of spirits, Armadillo starts the Party Spin feature, whipping out all kinds of gifts. On any spin the Armadillo could create Icy Wilds, summon Giant Symbols onto the reels, award multipliers, surprise you with some Bonus Money, upgrade symbols and more. If you manage to collect three Christmas Sleighs, it will trigger the Trail Bonus Game which offers a board game-like experience with lots of potential collection enhancements. These include features such as Christmas Stocking Multipliers, Credit Awards, Skiing Roll and Extra Lives.

It’s that festive time of the year again! And to help you get in a jolly good mood, we’ve gathered the Top 5 Christmas slots available from our Game Browser this holiday season.

Now that we have you here…

We’ve gone live with this year’s Winter Special! This time it’s all about our Reel Races, and we’re hosting £2000,- daily slot tournaments all the way into the New Year.

These are the dates:

Start up your sleighs and ride the Reel Race to Christmas in our 24-hour slot showdown with a sparkling stocking-filler of £2K – every day! Opt-in (for free) and spin the selected seasonal slots. As you climb the leaderboard, you might be able to unwrap a daily cash gift. But wait, there’s MORE! Each daily Reel Race you compete in between 1st – 25th December will earn you points towards the grand £10,000 Christmas Leaderboard prize, paid out on December 26th. The same applies for the Reel Race to New Year, but with a New Year Leaderboard of £4,000 – paid out on January 3rd – now wouldn’t that be the perfect start of 2023.

General Reel Race Terms
The ‘Reel Races’ are a Video Slots tournament based promotion.
The Reel Races start at specific times during the day and only run for a certain amount of time.
The Reel Races are time based. Only spins that are fully completed within each Reel Race timeframe will count towards your total.
Players must opt-in to each race.
Each Race has a limited amount of spins available.
Only spins from qualifying game, after the start of the Reel Race, count towards your total. The eligible game for each Reel Race will be displayed next to the related Reel Race.
Reel Races can be played on qualifying games only.
Once the maximum number of the Reel Race spins has been completed, no further points will be awarded.
The winning players will be determined using a ranking system.