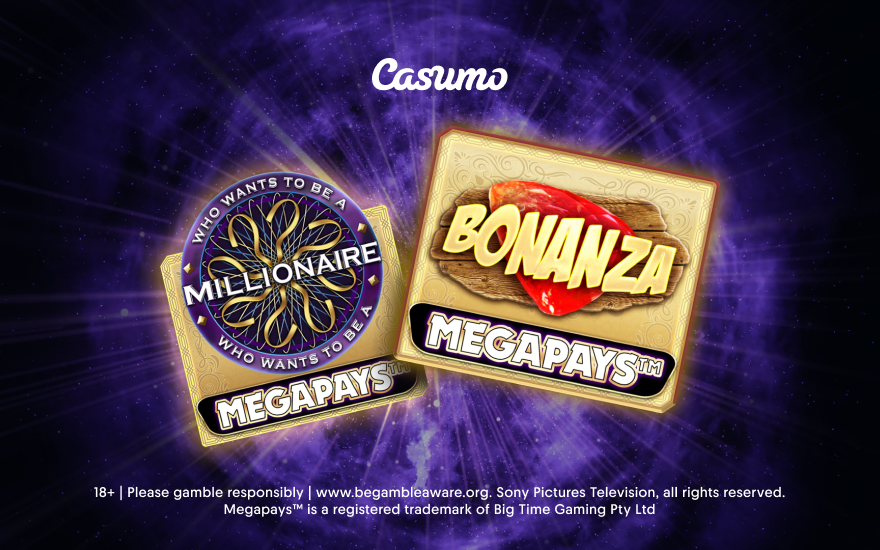 Megapays is a new mechanic from Big Time Gaming that allows one of four progressive jackpots to drop on any spin. The mechanic is currently available on two games: Bonanza Megapays and Who Wants to Be a Millionaire Megapays, both of which you can play at Casumo (duh!).

Read on to learn about the features of each game, more about game developer Big Time Gaming, and some info on progressive jackpots.

How to Play Megapays Games

A lot of games have progressive jackpots, so what sets the Megapays games apart? Well, we’re glad you asked! Megapays provides a four-tier progressive jackpot integrated with the ever-popular Megaways mechanic (see below). That means these slots, like other Megaways games, have way more paylines than the average slot and cascading reels, plus jackpots.

Bonanza Megapays is set in Appalacia, its mining theme enhanced by twangy bluegrass in the background. It has cascading reels with stacking multipliers, a bonus spins round, a four-tier progressive jackpot, and a Megapays mini-game. Phew, that’s a mouthful!

As previously mentioned, the Megapays jackpot feature can be triggered at any time, completely randomly. If this happens, you’ll be transported to a Las Vegas-like casino. One random symbol will be assigned to be the Megapays symbol. If that symbol lands during the feature, you get a respin. This goes on until no new Megapays symbols land.

While this is happening, keep an eye on the jackpot tracker bar. The number of Megapays that land determines which jackpot drops:

Cascading reels cause winning symbols to disappear after they pay out and are replaced by new ones that fall in, which can lead to another win, and the process goes on. This can make for some very satisfying chain wins. Bonanza Megapays’ bonus spins include a stacking multiplier. Each time you hit a cascading reel win, it goes up by 1x. And it doesn’t reset!

Speaking of which, it takes four scatters to trigger bonus spins. In this game, the scatters are letters that spell out G-O-L-D. The bonus round starts with 12 spins. For each extra copy of the letters in G,O,L&D (up to 6) you get another five spins, up to 22. As you spin, gold bars stack up on the mining cart above the reels. Land three or more and you get an extra five bonus spins. The cascading reels during bonus spins is the main road to top wins in Bonanza Megapays due to the stacking multiplier with infinite retriggers.

Who Wants to Be a Millionaire Megapays

If you liked the show, you’ll definitely enjoy the Who Wants to be a Millionaire Megapays progressive jackpot slot. The format has been licened for spin-offs and remakes in over 160 countries, and Big Time Gaming turned it into a slot which now has a Megapays spin-off of its own. This newest version has six reels and a four-tiered progressive jackpot, making it the first Who Wants to be a Millionaire slot with potential to live up to its name.

Who Wants to Be a Millionaire Megaways features a progressive jackpot with four tiers and a cascading wins Megapays system, as well as a bonus spins round, which has some unique mechanics inspired by the show.

Similar to Bonanza Megapays, the Megapays jackpot feature can be triggered at any time. You’ll know it’s happened if you land a colossal A, K, Q, J, 10 or 9 symbol. If this happens, you’ll be transported to a Bellagio-inspired casino where you get an automatic respin. This goes on until you hit a spin with no new Megapays symbols.

Depending on how many symbols land during this feature, you could be eligible for one of the four jackpots:

Cascading reels allow winning combinations to disappear after hitting. New symbols replace them. If these contribute to a win, more symbols get added, an so on. During bonus spins, each consecutive win comes with a multiplier attached.

The Who Wants To Be a Millionaire Bonus Spins start when you hit three scatter symbols with eight spins. However, you can gamble them, choosing either A,B,C or D. There’s no reasoning — you just have to guess. Just like in the TV show, you can use the lifelines phone a friend, ask the audience, and 50/50 if you stumble. If you answer correctly, you can get up to 50 bonus spins. Alternatively, you can keep your eight bonus spins from the get-go.

Either way, once you start the spins, the 1x multiplier increases every time you hit a cascading win. There’s no limit to how high it’ll go. This is the main way you’ll see big wins like the highest possible win of 72,130x (outside of the jackpot).

Big Time Gaming: The Provider that Keeps on Providing

If you’ve heard of Big Time Gaming before, it’s probably in reference to Megaways slots. You see, the Sydney-based game provider developed the Megaways mechanic in 2015, and since then it’s taken the world of online slots by storm. A lot of other developers have since released Megapays remakes of their most popular slots under the Megaways licence from BTG.

The mechanic is pretty simple: instead of the reels and rows being fixed (as in 5×3 or 7×7), each reel is divided into a different number of segments that varies on each spin. Simple it might be, but its success has been seismic. It’s only natural, then, that Big Time Gaming would harness the Megaways momentum with a progressive jackpot offering. And thus, Megapays is born!

How Do Progressive Jackpots Work?

Speaking of progressive jackpots, what are they again? With progressive jackpot slots, in addition to what a player bets per spin, he or she also contributes to a common pool. The total grand prize is generated by the bets of all the players from all the different online casinos that offer that particular game. With each spin, the jackpot will increase a little (predetermined) bit, until one happy player manages to land the big prize.

You can learn more about different kinds of network promotions and progressive jackpots in this blog post.

Did you know that at Casumo we offer our own progressive jackpots? That’s right, Casumo players can opt in to participate on Casumo Jackpots on our most popular slots. Simply switch the opt-in toggle in the lower-right corner of qualifying slots to ON in order to participate in Casumo jackpots, which also come in four tiers just like Megapays do. It’s a great way to add the jackpot element to a favourite game of yours, even if it’s not part of a network progressive.

Learn more in this blog post about Casumo Jackpots.

Big Time Gaming has taken some of its most loved Megaways games and added a dash of glitz and glam to create a jackpot offering that will surely make the world of slots sit up and pay attention. Are you ready to check out the newest thing?