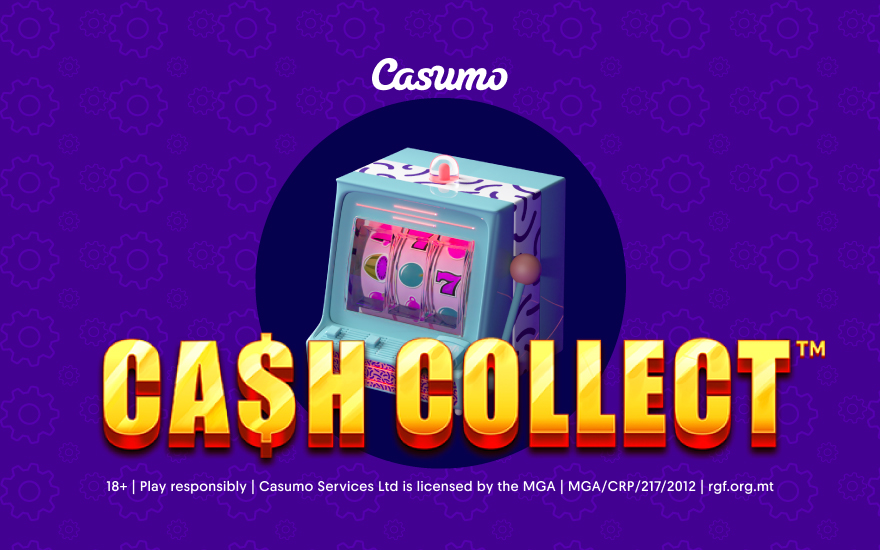 From the desert to the sea: the Cash Collect feature from PlayTech

It’s all about the cash

When it comes to slots, we all know we have our minds on our money and our money on our minds. Cash Collect, a feature from the games provider Playtech, has put the cash even more front and center. Well, actually, front and to the right, because the fifth, rightmost reel is now where the unforgettable Cash Collect symbol might appear to award on-reel cash prizes and free games.

The Cash Collect brand from well-established provider PlayTech made a huge splash as soon as it hit the market. The first game to feature it, Sahara Riches, soared to second place on PlayTech’s performance charts within a week of its release. PlayTech is known for designing its games within collections it calls Power Suites, of which Cash Collect is a recent addition.

The Cash Collect feature works similarly on both games in the Power Suite. The fifth reel, in addition to the standard symbols, has a Cash Collect symbol: 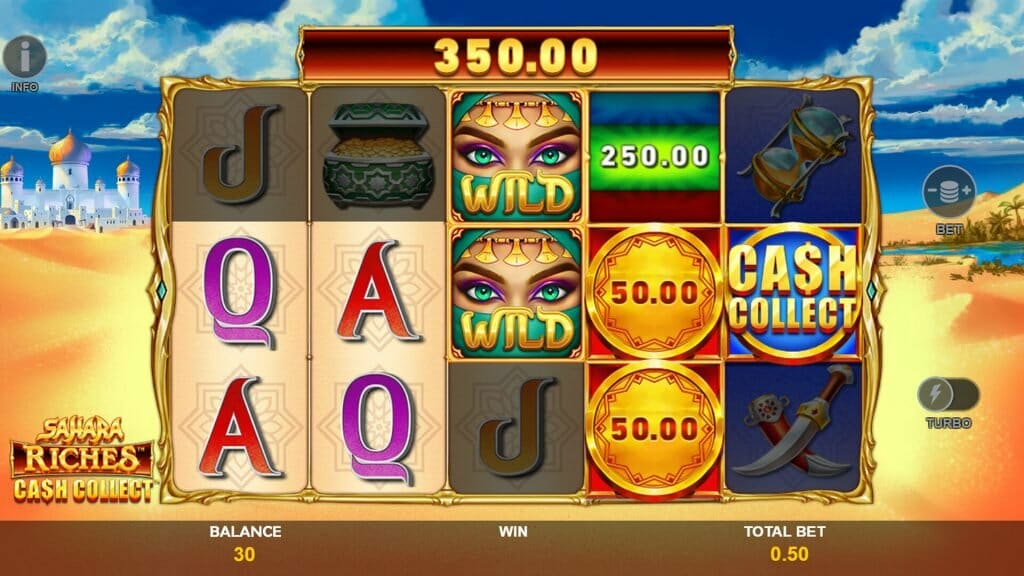 Whenever this symbol appears, it allows the player to collect any prizes that landed on the same spin. These take the form of cash, free spins, or fixed jackpots.

Sahara Riches takes you out under the endless desert sky in search of gold coins and precious gems. Uncover three, four, or five matching symbols or wilds on a payline for rewards, and uncover major winnings when you activate the Cash Collect feature.

In addition to the Cash Collect symbol above, Sahara Riches has the following special symbols: 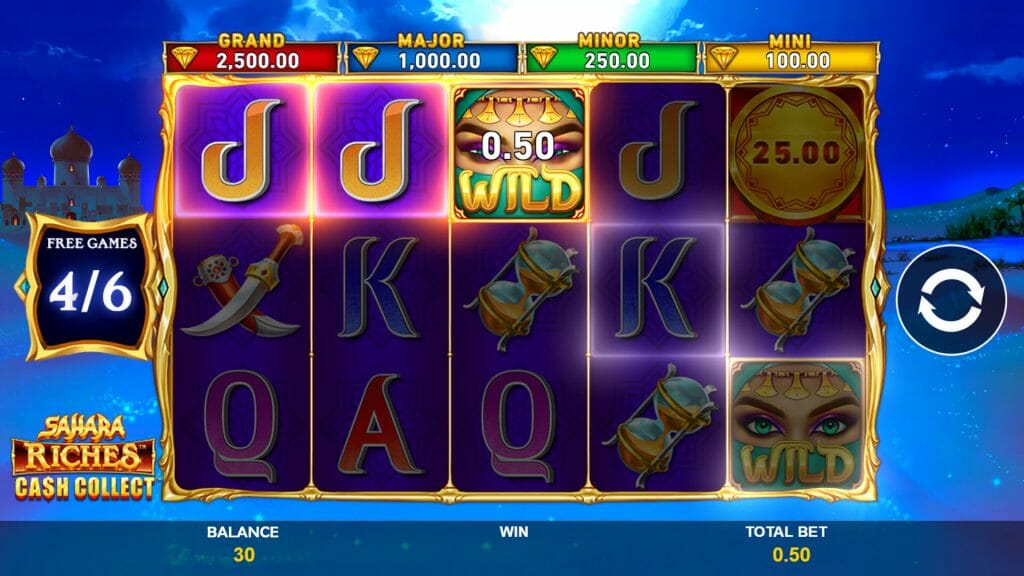 A woman in an emerald-green veil helps you connect symbols and complete paylines.

During play, symbols with +3, +7, etc. appear on the reels. If they coincide with a Cash Collect symbol, it’s cause for celebration because it means the player has just won the corresponding number of free games.

Gold coins inscribed with different value amounts appear on reels 1-4 during play. If a single spin turns up one or more of these coins AND a Cash Collect symbol, then CHA-CHING! The total value of the coins goes straight to the player. 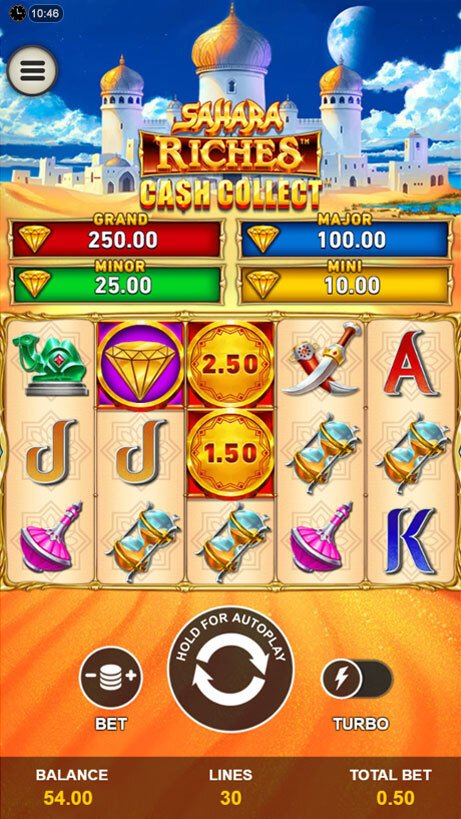 When a spin reveals a diamond along with the Cash Collect symbol, it triggers one of the fixed jackpots, meaning it’s time to get up and dance around in celebration! Which jackpot it will be is chosen randomly, paying out the following prizes:

Head to the underwater city of Atlantis to play the second game in PlayTech’s Cash Collect Power Suite. Similar to the collection’s debut game but with a few fun twists, this slot set in the mythical metropolis is full of treasure and mystery. 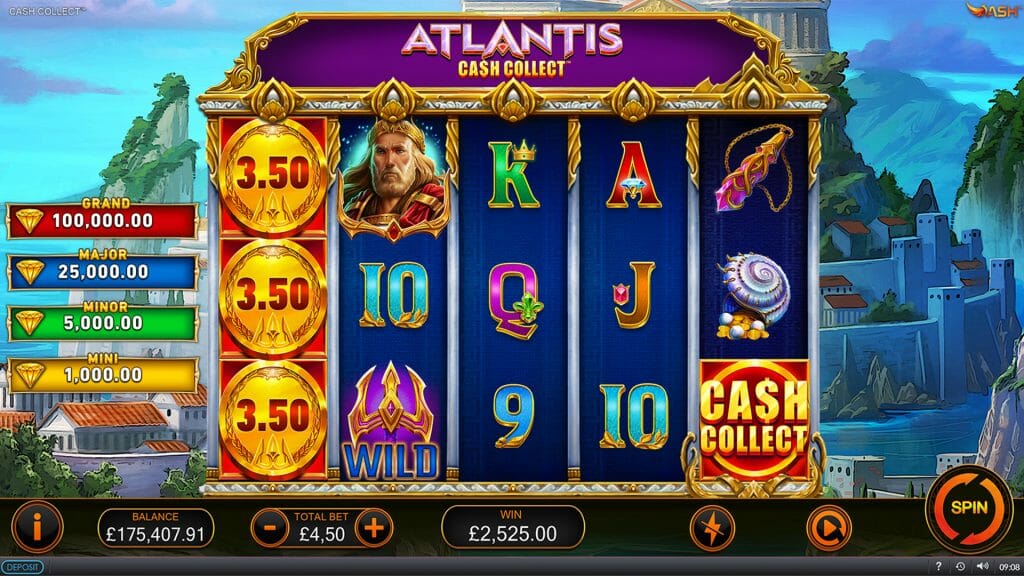 What better instrument than a golden trident to help grab those paylines and reap the rewards? Wild tridents can be used to combine the most lucrative standard symbol, the god Posseidon. Five of those sea gods in a row multiply the total stake up to 20x.

The gold coins in this slot are valued up to 1000x the total stake. If they appear on the same spin as the Cash Collect symbol, opa! Money in the bank.

If the fifth reel turns up the Cash Collect symbol along with a diamond, it’s cause for a mini, minor, major, or GRAND celebration, because it means one of the fixed jackpots has been triggered, worth up to 1000x the total stake.

Unlike in Sahara Riches, there are no specific symbols dedicated to free games. Instead, players earn unlimited spins when they land gold coins on three or more reels. The value of the coins is set to the side, serving as the reset amount. Mystery symbols appearing on the fifth reel during free games turn up either Cash Collect, reset, or end. Players collect as much cash as they can before the end of the game.

How to play Cash Collect slots at Casumo

Are you ready to try Cash Collect slots at Casumo casino? All you need to do is log in to your account (or sign-up for a free account) and find Sahara Riches or Cash Collect: Atlantis in our casino Game Browser. Enjoy!