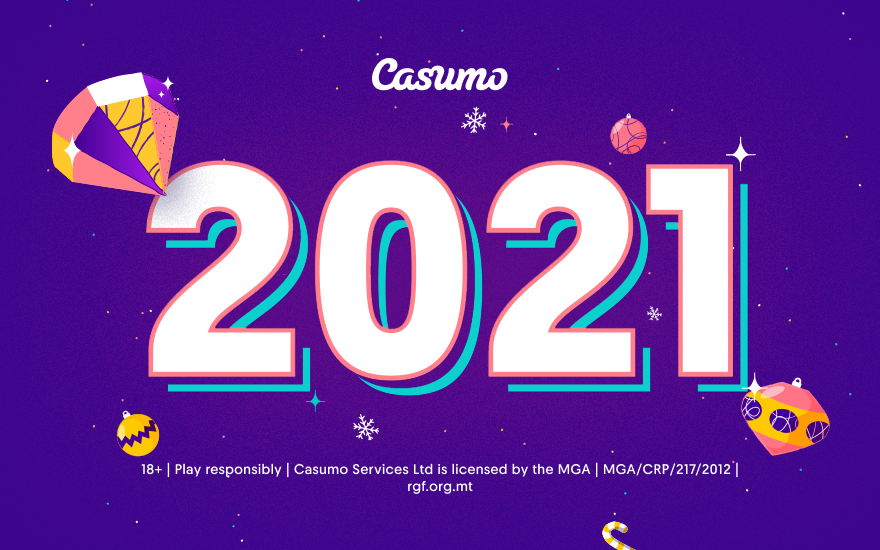 Year in Review: Casumo Highlights from 2021

The Casumo Universe 3 Weeks ago

The end of the year gives us a nice excuse to gather up all the happenings we’re most excited about at Casumo in one place. Read on for a recap of 2021’s new game releases, exclusive features, biggest wins, and news from sports, and live casino**. It’s no secret we had some exciting achievements in 2021, from new market launches to shiny new awards. Oh la la!

Get your confetti ready, it’s time to say happy new year! But first, let’s say goodbye to the old one.

**Please note that certain games and products such as Live Casino, Sportsbook, and Exclusive Jackpots are not available in all countries.

A Great Year for Casumo Casino

We had some stunner wins in 2021! One lucky player is entering 2022 a multi-millionaire. Sneak a peek at the top wins from the year and which games paid out:

Meet some of the new kids who joined the class this year. These top newbies are some of the slots that quickly became popular picks among players:

Gates of Olympus (Pragmatic Play) – a Greek pantheon-themed “all ways” slot with winning combinations occurring anywhere on its six reels.

Jammin Jars 2 (Push Gaming) – a much anticipated sequel, this new version kept the original’s 8×8 grid and disco soundtrack and added a “Juice Meter” that can unlock Giga bonus spins.

Two popular game mechanics for slots in 2021 include collect games and way games. Collect games feature on-reel cash prizes. In general, these games have special symbols displaying specific amounts. Earn a certain combination of these collect symbols or land them on a bonus round and the cha-ching, that cash is yours to keep. Check out popular collect games Fishin Frenzy, Big Bass Bonanza and Sahara Riches: Cash Collect.

Way games are games with increased numbers of ways to win. For example, the uber-popular Megaways (Big Time Gaming) mechanic where, as opposed to other slots with fixed paylines, the number of paylines is decided randomly on each spin for up to 117,649 ways to win, like in Gonzo’s Quest Megaways. PopWins (AvatarUX) create new icons each time a player spins a winning combination, allowing for another possible win, up to 33,614 ways. Check it out with Cherry Pop. Meanwhile, the xWays mechanic (NoLimit City) randomly adds reel height to increase the amount of total wins on games like Pixies vs Pirates with up to 11,664 ways to win.

In January, we launched the very exciting Casumo Exclusive Jackpots. These four-tiered progressive jackpots on our most popular games allow Casumo players to opt-in to contribute to jackpots to add extra excitement to the experience of our best slots. We’re all about the thrills at Casumo, and our exclusive jackpots are a way of expressing that. This is why we developed the spinning wheel for players to enjoy more time on the edge of their seats as they wait for the wheel to spin between mini, minor, major and mega jackpots. So far, players have won a total of €1,579,894.89 from 39,374 Casumo exclusive jackpots!

This year, our Live Casino is even livelier!

In 2021, Live Casino got a little more autonomy when it was recognized as its own vertical. As of this year, Casumo is structured like a tripod with the three legs being Casino, Live Casino, and Sportsbook. As its own vertical, naturally, Live Casino needed a nice piece of real estate on our website, so the Live Casino page got a make-over to better guide new and returning customers through its offerings.

And it has a lot to offer, as it turns out! One of the top game mechanics of 2021 was the Live Casino Wheel, a feature of popular Casino Game Shows Crazy Time and Dream Catcher.

Live Casino is a place where we can showcase the friendly faces behind the Casumo brand even more than usual through our lovely hosts and dealers at Casumo studios. With that in mind, Live Casino went all out with the decorations for Diwali, Halloween, and Christmas.

From the Euros to the races… Casumo Sports dared to be different.

Sports finally returned after a pause during the pandemic, and we’ll tell you: it’s been a flier. The summer months were filled with the action from the rescheduled Euro 2020, which saw Italy be crowned European Champions.

At Casumo, we loved every minute of action and dazzled our followers with excellent offers and stat-graphics. We opted for this approach to present sports stats in a fun and appealing way, aiding the bettor to pick his bets based on live stats and facts about the beautiful game.

“Il Calcio e tornato a casa” is what we teased as Italy beat England in a tantalizing final, but maybe for some of our readers it’s best not to relive the heartache.

Dare to Be Different

As ever at Casumo, our fascination with the different remains. This season, for a Casumo-first ever, we interviewed former athletes from the Premier League, who did things somewhat differently.

We met up with some athletes who would have been written off had they not put their head down and worked, players who came from far and wide to conquer in the world’s most competitive league: the Premier League.

Names like Shaun Goater, Andrei Kanchelskis and Ossie Ardiles are nowadays household names, but did you know that Goater hailes from Bermuda, an island with a population of only 60,000 people? Impressive right? If that doesn’t motivate you to chase your dreams, we’re not sure what will…

These articles hit the UK media like a storm and gave us a reach of over ONE BILLION PEOPLE throughout the world… it’s insane what can happen when good content gets given to the masses. 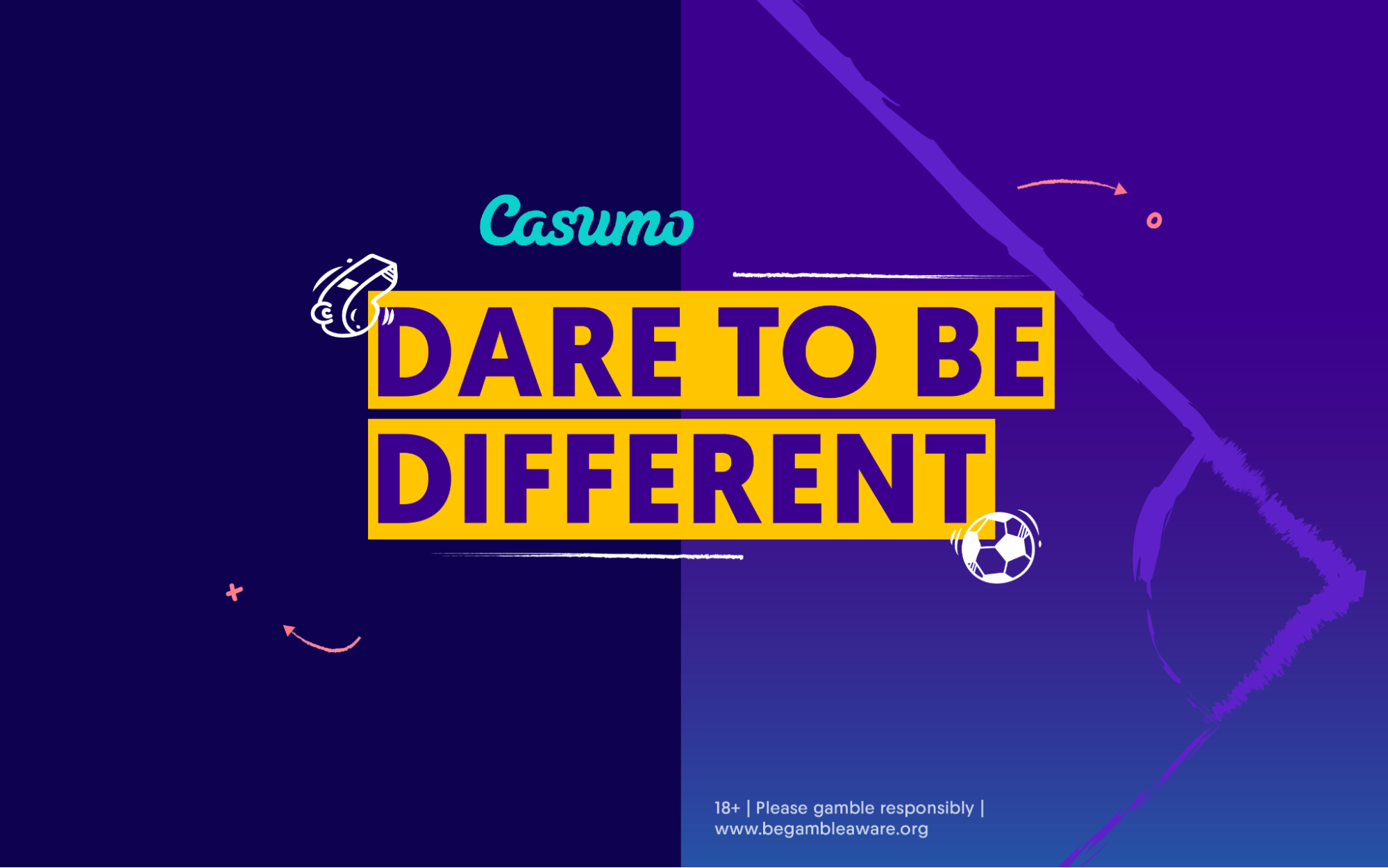 Casumo Sports continued to lend its name to the Horseracing calendar and we sponsored several races and events. We went to Haydock, York, Lingfield and more and loved every weekend of fun races.

As ever, we continue to show you a side of the sports world which not many people have access to. Even when our stadiums were closed to the public, we brought you there virtually in one of our most successful videos ever on social media. We went behind the scenes at our partner club Reading FC to show you a piece of your lives you were missing sorely.

We hosted several giveaways on twitter, including a Cristiano Ronaldo shirt following his return to Manchester United.

… and the best part is, we’ll keep going. 2022 will be another special year in sports with the winter World Cup in Qatar coming up sharply. We already can’t wait for kick off… and having you by our sides is all a part of the fun we have.

We don’t like to toot our own horns, but when other people toot them for us…well, what can we do? In 2021, Casumo received some pretty lovely pats on the back from respected folks in the industry. We don’t do what we do for the awards, but when we happen to win them, it sure is nice.

Casumo was honored to be shortlisted for the Casino and Mobile operators of 2021 by both the International Gaming Awards (IGA) and eGaming Review (EGR).

We were very pleased to win the award for casino marketing campaign at the EGR Marketing and Innovation Awards, for what the judges called an “excellent campaign showing [a] localized approach to innovation and communication.”

The campaign in question was for our Spanish market and revolved around the signing of petanque champion José Gómez, known in Spain as the ‘Petanque guy’. The idea was to poke a little fun at the classic Casino strategy of sponsoring a football mega-star to emphasise Casumo’s unique approach to the gambling experience. You don’t need to be a high-roller to roll with us!

EGR Nordics really made us blush when they awarded us Casino Operator of 2021, citing our efforts in responsible gaming and originality. One judge noted, “a brand that has been threatening to take on and beat the established industry players at their own game – just did.”

All in all, 2021 can’t be called an easy year. No, ‘easy’ wouldn’t be the word to describe the huge shifts and stamina the pandemic has demanded of every single person. However, we’re lucky at Casumo because we pride ourselves on shaking things up, rolling with the punches, and adapting to be even better than we might have been if we’d stayed with the status quo.

So take a moment to congratulate yourself on the ways you made it work in 2021. There, did you do it? Okay. Now, let’s roll up our sleeves and get ready to go all in on 2022.