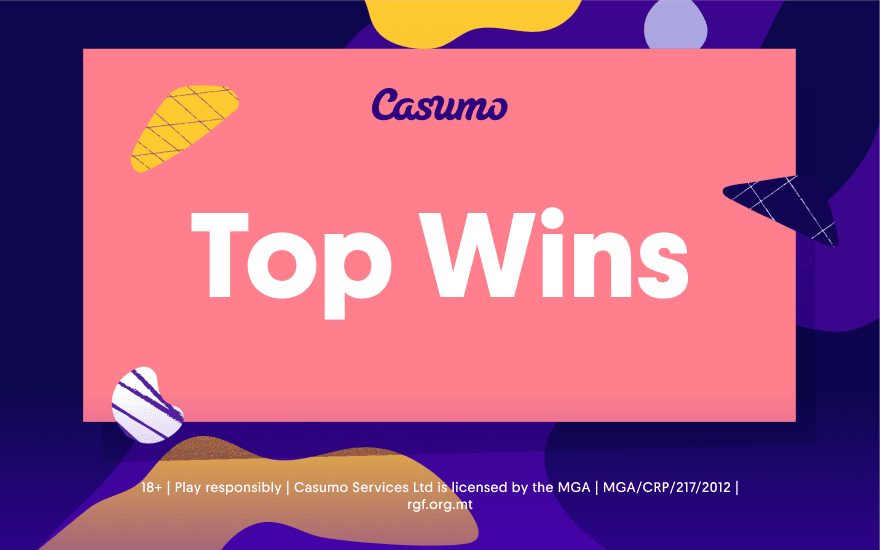 March is always quite the month, as we wrest winter’s icy grip from our lives. In like a lion, out like a lamb, is one way to describe the changes in climate and daylight during this turbulent month. At Casumo, it was more in like a big, Giant Panda and out like one, too, with this month’s big news centering on big wins from new slot release Big Bamboo from Push Gaming. Read on to learn more about this fun, new addition to Casumo’s slot collection.

We’ll also talk about this biggest cash prize of the month, the slots leading the pack in Casumo Jackpots, and more!

We have some juicy wins per bet to announce every month, and March was no exception with a humdinger of a win worth 15,000x the wager on the wizard-themed slot Crystal Ball Golden Nights. Wanted: Dead or a Wild also got some action (what else is new?), as did our new bestie Big Bamboo (more on that below!). Check it out:

The top prize in terms of cash, as opposed to bet x win, was taken home on the very last day of the month, March 31st, when one lucky player won $17,005.92 on a $2.00 spin on Poprocks, the gem-themed slot from Yggdrasil Gaming featuring the awesome Pop Wins feature.

Obviously, this begs the question: how many packets of pop rocks candy could you buy with that kinda money? Well, considering you can get a dozen packets for $12.95 ($3.27/ounce), that would be 18,366 full packets of the exploding sweets, or 147 kilos worth. Do you know what else weighs about 150 kg? Giant pandas! What are the odds? With that in mind, let’s move on to the month’s hottest slots.

At Casumo we keep track of the games that pay out the most big wins (more than 2,000x the bet). In March we’ve had two repeats from last month and one BIG surprise – Big Bamboo stole the show with 22 big wins! Let’s look into this brand new release that just came out on March 3rd.

Head to China’s bamboo forests where the world’s rarest bear, the Giant Panda, is chomping away. Big Bamboo has FIVE bonus features, and every spin has big potential with Mystery Bamboo symbols that can turn into Golden Bamboo, triggering multipliers, instant prizes, and free spins. In other words, more greens for the panda means more green for the player! This highly volatile new slot with 50,000x max wins is definitely one to watch.

For the third month in a row, this Western slot brought in a whole bunch of top wins per bet. The haunting, cinematic interpretation of the Wild West featuring burlap sacks of cash and bandana-masked outlaws roped 17 big wins in March.

The latest installment of the Reactoonz series continues to deliver. Gigantoonz was back on the Top List this month with 10 big wins. Read more about its features, including Quantum Wilds and the Gargantoonz modifier, on our blog.

Sweet Bonanza refuses to be unseated with another 1,062 jackpots dropped in March. In fact, the jackpot leaderboard has all the same names as last month, with Sahara Cash Collect in 2nd and Gates of Olympus in 3rd place.

Speaking of collecting cash, Casumo players dropped a total of €294,659.83 in Casumo Exclusive Jackpot winnings in March. That’s a lotta nectar and ambrosia! In modern day (and mortal) Greek terms, that’s 49,110 pitas at your local Greek street food joint — over a kilometer of gyros laid end to end, enough to get you from Athens to Sarajevo!

What more can you ask for, really? New faces, old favourites, and enough pita and poprocks to last us until next March! We had big wins on Big Bamboo, PopWins on Poprocks, and plenty of players wanting Wanted: Dead or Alive. Stay tuned for April Top Wins next month! In the meantime, keep an eye on our social media channels to peep the biggest wins of the week, every week.