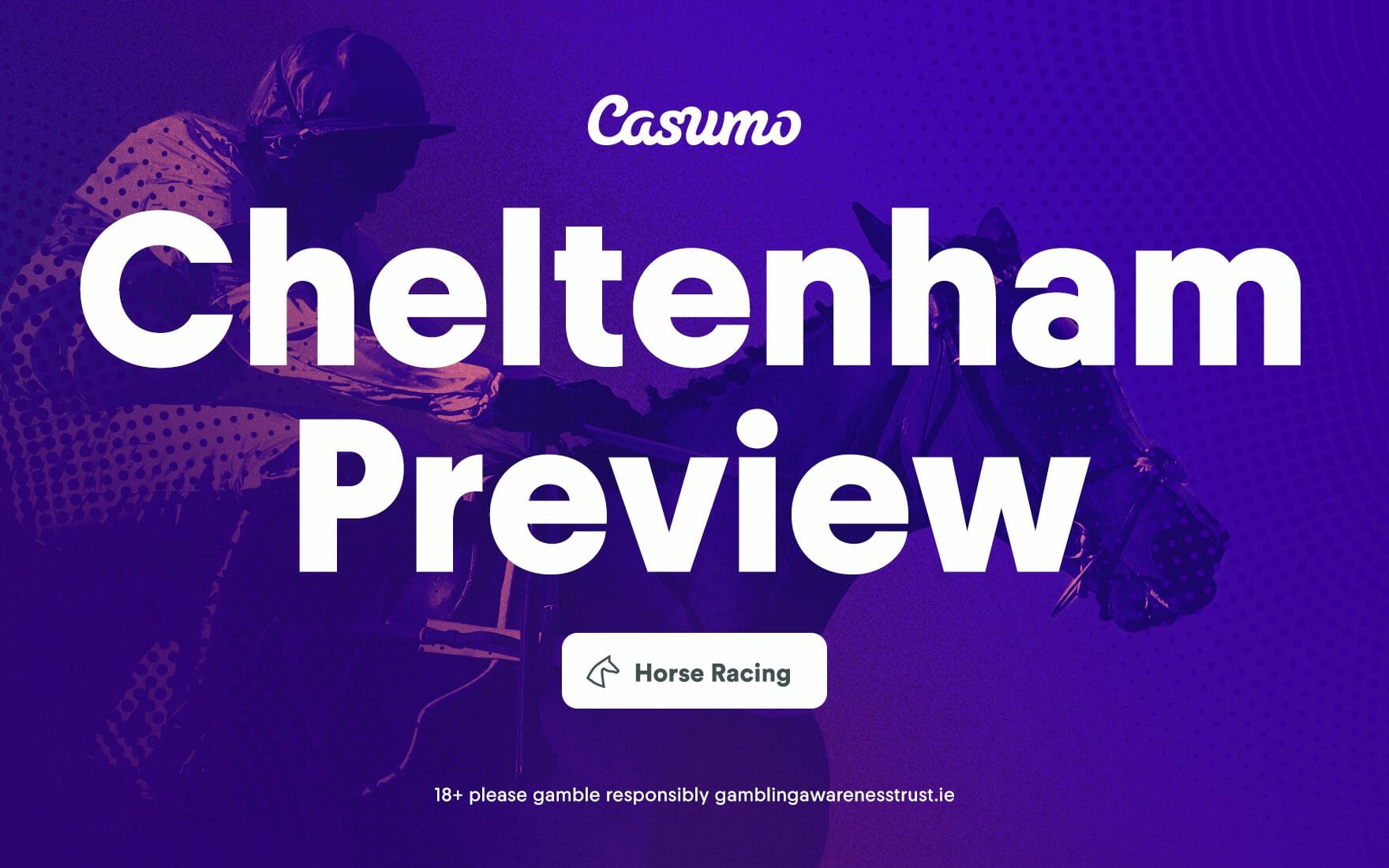 The horse racing action at the Cheltenham Festival concludes this Friday (18th March) with another top card, with plenty of horse races to bet on.

The first race is the Triumph Hurdle (1:30) and all eyes will be on Vauban and Pied Piper here.

Other day four races include the Albert Bartlett Novices’ Hurdle (2:50) and the Mares’ Chase (4:50) but on the final day it’s always about one race really – the Boodles Cheltenham Gold Cup (3:30). The last two winners of the race – Minella Indo and Al Boum Photo – are back for more.

To help narrow down the fields and hopefully find the winners – here at CASUMO we give you all the key horse racing betting trends and stats ahead of the LIVE ITV races from the Cheltenham Festival on Friday 18th March.

CASUMO VERDICT: Popular owner Rich Ricci has made it no secret that he feels his VAUBAN is his best chance of getting something at the Festival this year and it’s easy to see why. This 4 year-old was very impressive in winning the Spring Juvenile Hurdle at Leopardstown last time out. He beat Fil Dor by 3l that day and even though he lost by ½ a length to Pied Piper the time before at Punchestown was actually hampered that day. He meets the Elliott runner – Pied Piper, plus Fil Dor again – it should be a fascinating three-way match up between the trio, but the Mullins/Ricci runner can come out on top. Of the rest, Il Etait Temps and the unbeaten pair of Knight Salute and Doctor Parnassus have claims too, but a chance is also taken on the Gary Moore runner – PORTICELLO (e/w). The Moore yard had heartbreak in this race a few years ago with Goshen falling late on with the race in the bag. This 4 year-old looks another top class horse in the making for the yard after winning four of his five starts. The last of those wins came at Haydock on a C2 race on heavy ground and his only defeat came three runs back to Knight Salute (3/4l) at Donny, but you feel he’s progressed well since then to have a decent chance of betting that form line.

CASUMO VERDICT: This has been a kind race for the Dan Skelton yard in recent years – winning three of the last six. The run WEST CORK (e/w) this time and after a cracking win in the Greatwood Hurdle back in November. That came off a 631-day break too the 90-day break from the track isn’t a big concern. With only seven career runs over hurdles here should be more to come and Harry Skelton, who has been on two of the yards three recent wins in this race. Skelton also runs – FAIVOIR (e/w) – who could easily outrun his odds and has only been out the first three once from 10 runs over hurdles. A recent second in the Morebattle Hurdle was a good run and meets the winner of that race – Cormier – on better terms. The other yard that have a top record – unsurprisingly, is Willie Mullins. They’ve won 3 of the last seven. He’s got Tempo Chapter Two, Tax For Max, Dysart Diamond Farout, and STATE MAN in the race, but with Paul Townend picking the last-named he’s worth an interest too. Lightly-raced with just three runs (1 win) over hurdles and was an easy 17l winner last time at Limerick. An opening handicap mark of 141 looks very fair with there likely to be improvement here. Of the others, Top Bandit for Elliott has rattled off three wins on the spin and has to be on the shortlist, while Colonel Mustard, Surprise Package and proven course winner – I Like To Move It – are others to respect.

CASUMO VERDICT: Ginto has been all the rage here after three smooth wins this season and the last of those was an eye-catching Grade 1 win at Naas. He’s up to 3m here for the first time but looks very likely to get the extra trip. Good Time Jonny, Bardenstown (course winner), Shantreusse, The Nice Guy and Minella Cocooner are five other big Irish players that all won last time out. However, I’m happy to side with two British runners here in HILLCREST and STAG HORN (e/w). The former is a proven course winner after winning here on New Year’s Day and even though he unseated after (again here), he bounced back in style to win at Haydock. The Daly yard think he’s useful and we know he’s proven at the track, on the ground and over the trip. Stag Horn is interesting too. A former 100+ rated flat performer that is 2-from-2 over hurdles with wins at Hereford at Warwick. The form of his last win has been franked with the second going in again too. The longer trip is a slight unknown, but he handled soft/heavy ground well when on the flat, while a 2-month break to ready for this would have freshened him up.

CASUMO VERDICT: Onto the ‘big one’ and it’s a cracking renewal of the Gold Cup with many chances and the last three winners all in attendance. Al Boum Photo is responsible for two of those wins (2019 and 2020), while last year Minella Indo took the honours. The former has taken his normal lightly-raced route to this so despite his age (10) has to be considered to run well still – but only Kauto Star has even regained the Gold Cup. A Plus Tard is also back for more after a close second last year. He’s a year older at 8 and cold not have been more impressive when winning the Betfair Chase at Haydock in November – beating Royale Pagaille by 22 lengths! Tornado Flyer, who was third in the Ryanair last year, will be hoping to prove to everyone that his King George win on Boxing Day wasn’t a fluke and if you think that he looks overpriced. The main British challenge will come from the Skelton runner – PROTEKTORAT (e/w) – who was last seen thrashing the former Gold Cup winner Native River at Aintree in December. He’s run 7 times over fences and is yet to be out of the first two. We also know the track is fine as he ran a blinder with a big weight in the Paddy Power Gold Cup here in November (2nd), while the 104-day break is fine as he’s gone well fresh. Chantry House, last year’s Marsh Novices’ Chase winner, didn’t impress last time when winning the Cotswold Chase here, but he still got the job done and it’s hard to knock his record over fences (8 runs, 6 wins). It’s hard to knock the course form of last year’s winner – Minella Indo – he does seem to love it here 1-2-1 and another big run looks on the cards. But, in a race that is likely to require plenty of stamina, the other pick is GALVIN. This Gordon Elliott runner, who won the NH Chase over 3m6f here last season, will relish the test and made the step up this season when beating A Plus Tard by a short-head at Leopardstown in the Savills Chase. He’s had a break since but goes well fresh and will have the experienced Davy Russell doing the steering.

CASUMO VERDICT: Last year’s close runner-up – Billaway – will be popular again but is little value for a horse that’s only won one of his last five. He’s sure to be thereabouts, but I’m happy to look elsewhere here. WINGED LEADER could be the answer after dealing with Billaway in a Hunter Chase at Thurles by 12 lengths in January. He’s now won his last five starts and at 8 years-old has a lot more scope for improvement than most of these. Dubai Quest, Pont Aven and Cousin Pascal are others to note, and all come here in decent winning for. But it’s the David Maxwell-ridden – BOB AND CO (e/w) – that is the other pick against Billaway. This Paul Nicholls runner unseated in the race last year but bled from the nose that day so had an excuse. He’s returned this season with some good runs and was only 2 lengths behind Cousin Pascal at Haydock last time out. He’ll be better for that and with two wins in the race since 2017 Paul Nicholls has a good record in this contest. Of the rest, It Came To Pass won this in 2020 and is back for more, but at 12 it might be a tall order to wrestle back his crown, so place claims at best.

CASUMO VERDICT: Only one past running of this – last year we saw Colreevy beat Elimay in a thriller. The winner isn’t back for more, but the runner-up is – Elimay. This likeable grey is yet to finish out of the first three from 9 runs over fences and so another big run looks on the cards for this Willie Mullins mare. Concertista is another for Mullins and she’s done well since switching to fences with two wins from two. He’s got Festival form too after winning the Mares’ Novices’ Hurdle in 2020. But her lack of experience and the fact she’s got to give 3lbs away would be the worry. So the pick here is for another of last year’s Festival winners – MOUNT IDA – to go in again. She won the Kim Muir in dramatic fashion – coming from a mile back that day. She’s since improved this season and beat Elimay at Fairyhouse on New Year’s Day giving her 3lbs. We know the track is fine too and Davy Russell is 3-from-4 when riding her. Of the rest, Vienna Court, Zambella, Scarlet And Dove have claims to hit the frame if one of the main three under perform.

CASUMO VERDICT: A very tough renewal of this final Festival race with 24 runners. Elliott has won the race twice since 2017 and has another decent hand with Perfect Attitude, Au Fleuron, I A Connect, The Goffer, Chemical Energy and Hollow Games entered – the last-named is probably his main hope but as we know he’s no stranger to winning races at the Festival with any of this runners. Langer Dan was a good second 1 months ago, but is up another 2lbs here and wasn’t that convincing last time at Taunton. Yes, that came off a break, but it was still only 24 days ago. But Willie Mullins also does well in the race and runs two – Five O’Clock and ADAMANTLY CHOSEN. The last-named looks their better chance with FIVE O’CLOCK (e/w) coming back from a huge lay-off (735 days). That said, the Ricci-owned runner was last seen running a close 7th in this very race in 2000 and is now 4lbs lower. He’s still only 7 and if anyone can get a horse back after such a time off it’s Mullins. Adamantly Chosen is their other runner and he heads here off the back of a very easy win at Thurles (27 lengths). More on his plate here into a handicap for the first time, but is expected to enjoy the longer trip too. Others to note are Grand Jury, The Goffer and Cobblers Dream, but of the Elliott runner – AU FLEURON (e/w) – is chanced too. A beaten favourite last time at Punchestown but probably got bogged down in the ground that day. Before that had shown up well in races at Navan – now into a handicap he looks interesting and the useful Kevin Brogan catches the eye in the saddle.