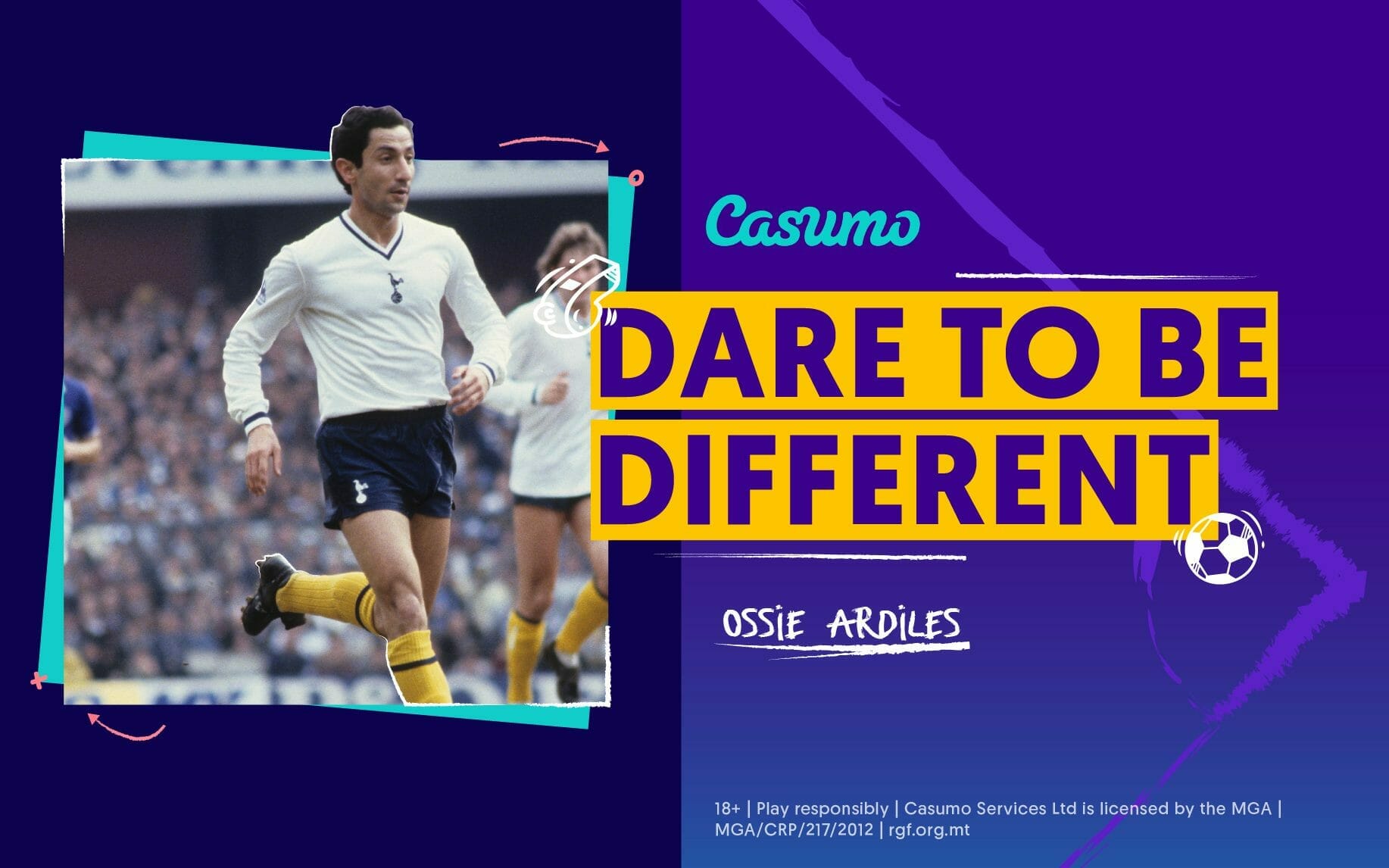 Dare To Be Different with Ossie Ardiles: My story

Here at Casumo we like the different. We embrace challenges, and celebrate diversity. We’ve embarked on a mission to source and interview athletes and football legends who have stuck out and made it, despite coming from different backgrounds. We searched far and wide for success stories in the most unlikely circumstances and chatted to the protagonists who showed us just how different their path to success was. We found Premier League stars who rose to the top of their game with illustrious clubs and we’re always on the hunt for more stories.

Read more about the stories that matter…They Dared to Be Different… and managed!

The interview was conducted in collaboration with the Daily Mirror who also pressed Ardiles on Harry Kane.

Before opening up about current affairs at Spurs, Ossie shared his story about his time in London.

“When I arrived at Tottenham there was a kind of union of mentalities with the supporters because I always thought football had to be played in a certain manner.”

Ossie Ardiles is reflecting upon his views of how the game of football should be played and on his philosophy of attacking football that was key to his identity right throughout his career as a player and manager.

A rollercoaster of a career that took him from Argentina to England as a World Cup winner and ground-breaking foreign arrival, and which then saw him go on to win the hearts of the Tottenham supporters to become a club legend.

It’s a career that had it all and one with the constant theme running through it of Ardiles staying true to his attacking principles and not being afraid to push the boundaries.

“When I have a challenge, it’s nearly 99.9% that I will take the challenge,” Ardiles tells Casumo. “And the challenge to come to England and play in 1978 was an absolutely huge one.”

Ardiles is referencing his decision to make the move from Huracán in his native Argentina to the shores of England and to Tottenham at the age of 26, fresh from having just won the World Cup with his nation on home soil.

“It was amazing winning the World Cup, it was extraordinary,” Ardiles said. “But after winning it I thought I needed a new challenge and so decided to continue my career with Tottenham. It was a great adventure right from the beginning…”

Ardiles joined Tottenham alongside fellow World Cup winner Ricky Villa, with the duo becoming the first overseas players to play for a club in England’s top flight following the lifting of a 47-year-old ban by the Football Association on teams signing foreign players.

While the pair were breaking the mould and blazing a trail for future generations, their arrival led to widespread debate across the country, with players and politicians alike speaking out against signing talent from abroad.

“A lot of people recommended me not to make the move,” Ardiles says. “When I arrived in England, a lot of people were having bets about how long I’d last because I was smaller than other players; that I was only going to be here for three months, four months, and the winter I will not survive… It was an incredible challenge but I don’t regret it for a moment.”

It was a move that would soon reap its rewards, with Tottenham fans taking to the midfield maestro’s combination of excellent touch, dribbling and passing skills. Ardiles learnt his trade playing football in the streets of Argentina and was given the nickname ‘Pitón’ (python) by his brother due to his snake-like dribbling skills, which stuck throughout his career.

Inspired by Ardiles, alongside the likes of Villa and Glenn Hoddle, Tottenham would go on to win two FA Cups and the UEFA Cup within the space of three years between 1981 and 1984.

Heading into the 1981 FA Cup final against Manchester City, Ardiles was the centre of attention in more ways than one with the Tottenham squad recording their cup final song ‘Ossie’s Dream (Spurs Are on Their Way to Wembley)’ with Chas and Dave, before the midfielder went on to play a key role in the final and resulting replay, made famous by Villa’s iconic winner.

“It was a dream of mine to play at Wembley,” Ardiles says, referring to the song title’s origins. “Wembley is the cathedral of football. Growing up, if there was one stadium I wanted to play at it was Wembley. For a lot of reasons the song was called ‘Ossie’s Dream’ but the person who stole the show was Ricky for his wonderful goal in the final and I was delighted for him.”

Ardiles added: “Winning the UEFA Cup was also like a dream. It was like somebody was writing the script for me like a big, big film and everything was a happy ending. To win the UEFA Cup and to do it in front of our own supporters (in the second leg) on penalties was absolutely wonderful.

“Our supporters played an incredible role because we were decimated in terms of injuries in this particular game. But somehow the supporters carried on pushing and pushing us until we won. It was one of the most beautiful nights for Tottenham and one of the best nights of my life as well.”

Ardiles’ time at White Hart Lane was interrupted, however, with his Argentine roots again causing some controversy. This time, in the wake of the Falklands War between the UK and Argentina, it became difficult for the midfielder to play in England and he went out on loan to Paris Saint-Germain for six months in the 1982-83 season.

“It was very hard,” Ardiles recalls. “At the end of the day, the country where I was born and I love was fighting a war against a country that adopted me and that I love as well. To be stuck in the middle was an incredibly difficult position to be in. But when I came back, I spoke to Ricky (Villa) and we saw we were going to be the bridge between the two countries through football.

Once back at Tottenham, Ardiles would remain there until 1988, even becoming caretaker coach in 1987, before leaving for spells at Blackburn, QPR, Fort Lauderdale Strikers in the U.S. and Swindon.

“When I arrived at Tottenham there was a kind of union of mentalities with the supporters because I always thought football had to be played in a certain manner,” Ardiles says. “I believe that football is part of showbusiness. We have to provide entertainment and very good quality entertainment. I 100% agree with ‘To Dare Is To Do’ – our motto at Tottenham – and I agree with the way that Tottenham won the European Cup Winners’ Cup and the league in style in the 1960s. There was always a kind of communion of interests between us.”

His move into management

After finally hanging up his boots, Ardiles moved into management at Swindon in 1989. Staying true to his attacking principles, Ardiles replaced the club’s long-ball tactics with what became known as the ‘samba style’. Swindon went on to win promotion to the top flight for the first time in their history, only to have it stripped due to financial issues.

Jobs at West Brom and Newcastle followed, before Ardiles returned home to White Hart Lane to manage Tottenham in 1993. While he was ultimately sacked into his second season at the club due to poor results, it was an exciting time with the likes of Jurgen Klinsmann arriving and Ardiles fielding his ‘famous five’ forwards of Klinsmann, Teddy Sheringham, Darren Anderton, Ilie Dumitrescu and Nick Barmby as he continued to entertain until the very end of his tenure.

“Tottenham was not a happy place to be at the time,” Ardiles says. “If you’re going to do something in the Premier League, you need everybody from the very top to the very bottom singing the same song – from the cleaners to the players. At the time I could see we were very divided which cost us dearly and it took Tottenham a long time to recover. It’s a big regret in my life that I could translate the way I played to managing all over the world, but I was not able to do it at Tottenham.”

Despite the setback, Ardiles’ trailblazing ways he displayed as a player never left him as his management career continued to take him across the globe with spells in the likes of Japan, Syria, Israel, Mexico and Paraguay.

And despite that disappointment at Tottenham, Ardiles’ significant contribution to the club’s success in the 1980s was recognised in 2008 when he was inducted into the Tottenham Hotspur Hall of Fame.

“It was a proud moment, absolutely wonderful,” Ardiles says. “But the one thing in my mind was to thank all the people that made it possible, in particular my fellow players, because without them I am nothing. Football is the team. You play with 11 players, so if we’re doing very well, the whole team is. Certain individuals start to shine a bit more but the thing that always comes first is the team. That’s why we won the FA Cup, why we won the World Cup, because we were always able to put the team first.”

While chatting to us and reporters from the Daily Mirror, we couldn’t help but get into current affairs at his old club Spurs. Tottenham were enjoying a good start under new manager Nuno Espirito Santo, but then fell flat badly in the North London Derby. Everyone at the club hates losing to Arsenal but despite that, Ossie Ardiles backs the manager, adding that “I like Nuno very much, I like his personality, I like how his team plays when he was at Wolves. It is too soon to judge him, he has all season.”

Its too early to tell of course, but Spurs need to pick up more points to win some doubters over.

We’re sports obsessed at Casumo and are in love with the Premier League. You can bet Pre-Game or In-Play on all the matches, and we also offer a cash out option when you bet live. Find all our Premier League odds here.