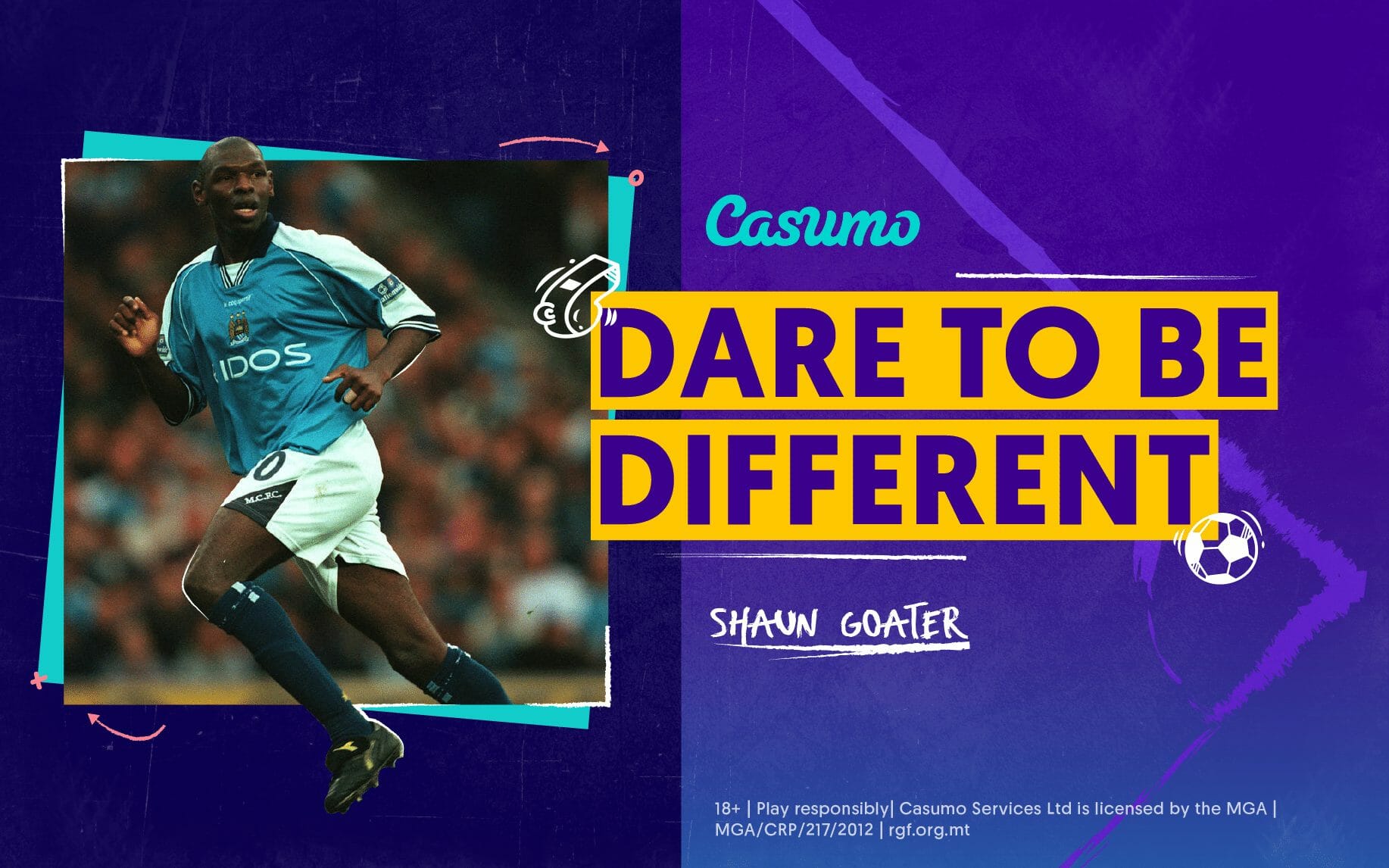 Dare To Be Different with Shaun Goater: My story

Here at Casumo we like the different. We embrace challenges, and celebrate people from diverse backgrounds. We’ve embarked on a journey to source and interview athletes and football players who have stuck out and made it, despite coming from different backgrounds. We searched far and wide for success stories in the most unlikely circumstances and chatted to the protagonists who showed us just how different their path to success was. We found Premier League stars who make it right to the top of their game with huge clubs and we’re always on the hunt for more stories like these.

Read more about the stories that matter…They Dared to Be Different… and managed!

“There were times when I’d foul a player and Manchester City fans were saying: ‘Off, off, off.’”

It’s hard to believe this is Shaun Goater speaking; that a player that went on to score over 100 goals for Manchester City to become a club legend, initially found himself on the wrong end of the club’s boo boys.

But there was little straightforward about Goater’s career; a player that went on a journey and wasn’t afraid to knuckle down to come out the other end on top.

While Goater is now revered as a hero on the blue side of Manchester, it was actually on the red side where his journey began.

After being spotted by Manchester United scouts back home in Bermuda, he was invited to Old Trafford for a trial with a first professional contract soon following. While his time at United ultimately ended in disappointment, it was a period of adaption that laid down the seeds for a brighter future.

“Everyone around the world wants to make it to England to play for a club, so to weave my way through was huge,” Goater says. “No, I wasn’t successful at United, I had to drop down a few levels to play for Rotherham and essentially learn the English game and how it was played.

“It was a challenging start as it was also about adapting to the weather and culture. For me it was always dull and grey, perhaps as I was in Manchester in the early years! I’d never experienced cold like it. I remember the first time I saw snow, I thought, ‘we’re definitely not training’. My phone was ringing and it was the gaffer asking where I was. I was like, ‘what do you mean where am I? I’m in bed, it’s snowing!’”

Spells at Rotherham and Bristol City soon followed, where the goals started to flow, and in 1998, nine years on from Goater’s United exit, Manchester City came calling.

With the club set to drop into the third tier of English football, this wasn’t the City of today with bucketloads of trophies and cash to spare – yet their support was as strong as ever.

“Despite City being a struggling club, they were still getting 33,000 fans at games and so that spoke for itself,” Goater says. “City were set to be relegated to the Second Division, but it was a huge club to sign for. There were passionate fans that wanted you to give everything.”

And so we return to the early days of Goater’s relationship with the City fans, where things got off to a bumpy start. The striker, who recruited a sports psychologist at the time to overcome the teething problems, attributes some of the initial animosity towards him down to the fact he claimed he’d score 25 goals for City in his first full season.

“It was a journey with the City fans too because initially in the first year or so the crowd didn’t take to me,” Goater recalls. “City fans thought ‘who is this kid?’ They saw me play and then thought ‘he isn’t the world’s best player after all’. That put the backs up of the City fans as it came across as arrogant, but I was just talking about what I’d done previously at that level. It was disappointing not having the fans 100% behind me and they made their feelings heard. Playing under that pressure was something new.”

Goater did, however, end up scoring 21 goals in that first full 1998-99 season, before following it up the following year with another 29 goals to be named the club’s Player of the Year, as back-to-back promotions secured City’s return to the Premier League.

“Playing in the Premier League was a dream come true,” Goater says. “I’m this kid that comes from Bermuda, you dream of it when you’re playing in the park. We used to call our pitch we played on ‘Wembley’ and I was fortunate enough to play at Wembley on a couple of occasions too and win. It was a brilliant time.”

By this point, Goater had been honoured by the Bermudan government with an MBE and a ‘Shaun Goater Day’ for his services to Bermudan football, having returned home each summer to run football camps for youngsters.

While their first season back in the Premier League ended in relegation in 2001, City, now under Kevin Keegan’s guidance, bounced straight back up to ensure they would crucially play the 2002-03 campaign, the club’s last ever at Maine Road, in the top flight.

Now playing alongside the likes of Nicolas Anelka and Robbie Fowler, Goater started to find his playing time under Keegan harder to come by. Yet he was to start in the last ever Manchester derby at Maine Road that season, which brought about arguably his finest hour in a City shirt – netting a brace in a famous victory to bring up his 100 goals for the club.

“Everyone lets you know it’s the most important game, playing against United,” Goater says. “United were the yardstick, winning trophy after trophy. And we were just, as Alex Ferguson put it, ‘the noisy neighbours’. In the last Maine Road derby, to score my 99th and 100th goals for City, it doesn’t get much better. To be honest, I wasn’t even aware I was actually on 99 goals for the club when I scored the 100th! The memories from that day are still so vivid…”

City bowed out from Maine Road at the end of that season and Goater was also moving on to pastures new with a switch to Reading in the summer of 2003.

If life at City started off badly, Goater couldn’t have asked for a better exit – captaining the club in the last ever game at Maine Road. By this point, the adulation for Goater was clear, not least through the ‘Feed The Goat’ and ‘Who Let The Goat Out’ chants now regularly being sung in honour of a true cult hero.

“It was an emotional day to captain City in the final game at Maine Road in my last game. After the start I had, to come full circle and be captain was a huge moment for me, knowing that I’d won the fans over,” Goater says. “I can’t speak highly enough of the City fans. And to this day, to have that adulation of them singing ‘Feed The Goat’, I would never have imagined that after the first season. The reality is, they looked and went ‘you know what, every season this kid is the top goalscorer’.

“When we got into the second season they started creating the songs, ‘Who Let The Goat Out’, ‘Feed The Goat’. When I first heard it, as I always used to be so focused on the game, I went into the dressing room thinking it was about Marc-Vivien Foe. The lads were like, ‘No Shaun, that song’s about you. They’re singing Feed The Goat.’ I thought, ‘I’m having that.’”

Goater’s career finished off with spells at Reading, Coventry and Southend. Yet it was to be the final act of his career, a routine game for Southend against Bristol City, which would truly come to signify the impact the striker had made against the odds and cap off a story about determination and hard work winning through – as 400 City fans made the journey south for the match.

“That last Southend game was such a proud moment for me and an emotional day,” Goater recalls. “To have 400 City fans there was just incredible. I don’t think any other club has had to prepare for three different sets of supporters like that. To have them make that four-hour journey was amazing and I absolutely loved it. To have that number of fans come down and support me on my last game was beautiful.”

Goater adds: “I think looking back, my work ethic and determination were key to my success. Yes, the journey was tough, but when I look back, there’s no regrets at all. It taught me how to grow as a man. I learnt a lot about myself, that I’m not a quitter when there’s challenges or adversity. I look back and I’m really pleased with my journey.”

Manchester City’s lack of a proper number 9 has grabbed the headlines all across Europe so far, and while we chatted about his hay day in Manchester, Shaun Goater also dug into more current topics. He told us and the Sun that if Man City needed help to sign Haaland, he’s their man:

“If they need me to talk to Alf, I’ll do what I can.” Goater did of course play with Haaland’s father, Alf-Inge. Well, Pep… you can’t say we’re not trying to help!

We’re sports obsessed at Casumo and are in love with sports. You can bet Pre-Game or In-Play on all the matches, and we also offer a cash out option when you bet live. Enjoy the games and find all our Premier League odds here.