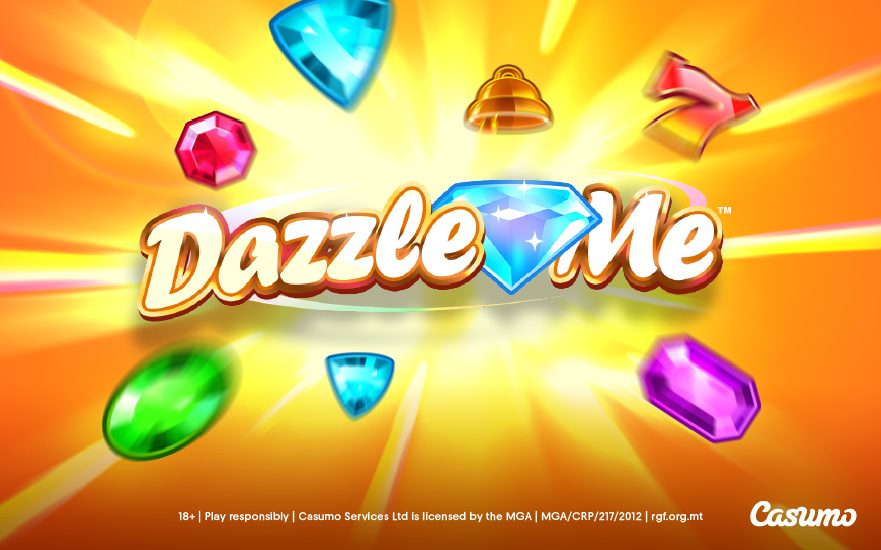 Dazzle Me Takes Its Turn in the Slot-light

Dazzle Me has been a popular slot for seven years now, never ceasing to delight players since its 2015 release. It set itself apart from the crowd early on with its unique reel structure in a 3x3x4x4x5 combination, allowing for a whopping 76 paylines. And we’re not even talking about the Megaways version (though we will below!).

At Casumo we like to put some time aside to celebrate our most popular games, our crowd pleasers, our fan favourites. Whether a golden oldie or a brand newie, as long as it’s a game that our players love as much as we do, we’ll include it in the series. Dazzle Me is the 10th slot to be highlighted in our Popular Slots series. You can also learn about other heavy hitters like Book of Dead, Big Bass Bonanza, and Fire Joker.

Dazzle Me features relatively low volatility, low variance, and a max win of slightly less than 800x your total stake. With hit frequency just under 20%, you can expect to hit at least one of the slot’s 76 paylines one out of every five spins, on average.

The regular symbols in this slot are gemstones in various colors set against a pearly-white background, almost like they’re on display at the jeweler’s. Deceptively simple, keep in mind that in this game the diamonds do shine bright. That’s right, the diamond is wild, and since this slot features Wild Reels, diamonds are everybody’s best friend. The Lucky 7 is the most lucrative symbol, paying up to 10x your stake if you land 5 on a payline.

Triggered randomly during the base game, Wild Reels cover 1-5 reels with Diamond Wilds. Needless to say, having entire reels covered in ice can lead to some high-karat wins.

All Free Spins feature Linked Reels, so Reels 1 and 2 are linked as are Reels 3 and 4. This means that if the last row on Reel 3 has a blue sapphire, then Reel 4 is guaranteed to have a blue sapphire as well. So there you have it, folks. The best things in life are free, but if they come with linked reels then they’re even best-er.

Like many great slots, Dazzle Me got a Megaways makeover to the great anticipation of its fans. The new Megaways version of the original Dazzle Me slot has six avalanche reels and offers up to 99,225 ways to win when these are at full capacity. The max win is quite a bit higher than the original, at 50,000x total stake.

The RTP is lower than the original at 96.1%, which is average for Megaways slots. The newer version has left Linked Reels behind, offering instead Dazzling Wild Reels where entire reels are covered in Diamond Wilds and expand with each winning combo.

Play Dazzle Me from NetEnt

New around here? Sign up for a Casumo account to play Dazzle Me and Dazzle Me Megaways.

Demo Dazzle Me for free

Follow the links to the games above to try a demo version of both Dazzle Me slot games for free before playing with real money.