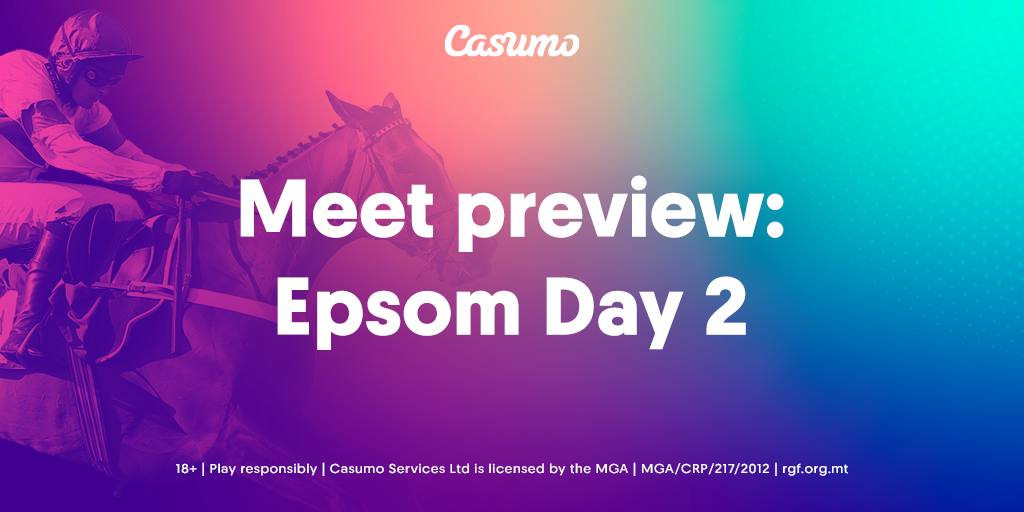 One of the biggest horse racing days on the calendar this Saturday (June 5th 2021) as it’s Derby Day at Epsom Downs racecourse.

As always, the ITV cameras are heading to the Surrey track and they are on hand to take in the first five races, with the climax being the Cazoo Derby at 4:30.

Here at Casumo we run through all the LIVE ITV races with key trends and stats, plus our best bets.

CASUMO VERDICT: With three of the nine runners, the Mark Johnston yard have 33% of the field – King Zain, King Frankel and Chase The Dollar. The three are respected with King Zain stepping up in trip for the first time, while King Frankel hasn’t been out of the first two in his last five starts.  It’s also interesting that jockey Ben Curtis has ridden Chase The Dollar in his last two starts, but prefers to get the leg-up on KING FRANKEL here – we’ll take him to go best of the Johnston runners. Camelot Tales wasn’t disgraced being Derby fancy John Leeper last time out at Newcastle, despite finishing seventh, but that came on the AW and the return to the turf is expected to suit better having won well at Redcar two runs back. Freak Out and Greatgadian can go well too, but the call is to side with proven course winner – PATIENT DREAM. This Ralph Beckett runner won well over 1m 1/2 f here last time out, but was keeping on well to suggest the extra yardage will be within range. Yes, a 7lb rise for that win makes life harder, but should be progressive still with only five career runs and his main asset is we know he handles the track. We also know that eight of the last 18 horses from stall 1 have been placed, so this is a further bonus.

CASUMO VERDICT: Trainer Richard Hannon won this race back in 2019 and tries to add to that success with Thank You Next and Posted. Of that pair, the 108-rated Posted looks their better chance and she should find this a bit easier than the G2 Dahlia Stakes she ran in last time. The 3 year-old, STATEMENT, would have a big chance too as being a 3 year-old she gets a handy 12lbs from the older horses and her 6 length 8th in the 1000 Guineas last time out was a decent effort. Parent’s Prayer and recent Goodwood scorer, Illykato, can be considered too, while Nazuna is another useful 3 year-old that gets the weight allowance. I feel we might see a better run from MAAMORA though, who was beaten into fifth by the already mentioned Illykato last time at Goodwood. That was her first run for 251 days, so can be expected to come on for it, plus off a current mark of 108 is the joint-top rated in the field. William Buick, who won on her last August, is also back in the saddle, while with 9 of the last 18 winners coming from stalls 5 or 6, then the 6 berth for this 5 year-old looks to be a further positive.

CASUMO VERDICT: With 14 of the last 17 winners coming from stalls 6 or lower, then this is good news for OH THIS IS US, MARIE’S DIAMOND, DUKE OF HAZZARD, ESCOBAR, PHOLAS and MAXIMAL. The top-rated in the field is Century Dream, who also won this race 12 months ago. However, he’s not getting any younger at 7 and was well below-par last time out in the G1 Lockinge Stakes. Okay, this drop in grade will help and we know the track suits but draw 8 might not be ideal this time. Frankie Dettori gets the ride on DUKE OF HAZZARD (e/w) and will be much better for a recent run at Ascot, which was also his first after a wind operation – he’s worth having on side. Bell Rock is the only last time out winner in the field, but that came in a handicap so would need another step forward here. Prince Eiji is closely matched with Oh This Is Us after running that one to a head last time at Ascot, but the other pick is MAXIMAL. A good draw in 6 and being a 3 year-old this 107-rated Sir Michael Stoute runner gets a handy 12lbs from most of the older horses. Ryan Moore is an obvious plus in the saddle too and with just six career runs might just have a bit more scope than some of the other more exposed runners.

KEY CASUMO TREND: 14 of the last 17 winners came from stall 6 or lower

CASUMO VERDICT: Run over one of the fasted 5f tracks on the planet, then blink and you might miss this one! Plenty of speedsters on show that only have one way of runner – blast out and try and hang on. That applies to the 2019 winner of this race – Ornate – who landed this prize when it was last run. He’s rated a pound lower this time too and in a race that is likely to be settled by a split decision or a fine margin, he should at least be out of trouble out in front. He’ll have company for the lead from CASPIAN PRINCE (e/w), who also likes to run from the front. He’s also a three-time winner of this race and despite his advancing years (12), he’s been running well this year without winning and heads here off a dropping mark that could make him dangerous in a race we know he loves. In 2019, we finished 9th, but was only beaten 2 ½ lengths – this time he’s rated a massive 18lbs lower! Recon Mission, Pettochside, Duke Of Firenze, who is yet another previous winner of this race and Mokaatil are other proven course winners here that have to noted. While the likes of Stone Destiny, Copper Knight, Only Spoofing and Sunday Sovereign head here in good order and are sure to be popular in the betting. However, the other call is YIMOU (e/w). This 6 year-old ticks a fair few of the positive trends, including age, weight and draw, while last time out at Newmarket he ran well on his return. That came off a 227-day break and he also didn’t get the best of runs that day – squeezed for room – so could have got even closer.

CASUMO VERDICT: Onto the ‘big one’ and really here all eyes will be on trainer Aidan O’Brien grabbing his nineth win in the race. He’s normally mob-handed and, don’t forget, 12 months ago he took the prize with his 25/1 shot, Serpentine. But this year he’s only got the one runner – BOLSHOI BALLET – and that might be significant. This well-bred colt has caught the eye in winning his last two at Leopardstown, including the Derrinstown Stud Derby Trial by 6 lengths. That race is often a good guide to the Derby, plus now being stepped up to 1m4f for the first time there is every chance there is a lot more in the locker. Yes, the track is an unknown, but that applies to most Derby runners each year. It’s still hard to ignore his chance and he looks the clear one to beat and another potential Ballydoyle superstar in the making. Of the rest, Irish 2000 Guineas winner – Mac Swiney – is interesting too, but I feel the longer trip here is a huge negative. He only just lasted out over 1m last time and was well beaten over 1m2f the time before. Mohaafeth will be trying to give trainer William Haggas his second Epsom Derby win (won it in 1996, Shaamit). Mohaafeth is another lively contender, having won his last three and was very impressive when winning a Listed race last time at HQ.  Another good trial over the years has been the Dante Stakes, so the winner of that race this season – Hurricane Lane – can go well too, having won all three races to date too. The Lingfield Derby Trial was won by Third Realm, but you feel a step up from that would be needed here. SOUTHERN LIGHT (e/w) could be interesting having won well at Leopardstown two runs back and last time had excuses when checked in his race and lost all chance after that. He’s from the shrewd Joseph O’Brien camp, that are still looking for their first Epsom Derby win, but you feel it won’t be long before they are grabbing success here. The other call though is the Ed Dunlop runner – JOHN LEEPER. This well-bred Frankel colt has improved with each race this season, including when landing a Listed race at Newmarket last time out in great fashion. Draw 12 isn’t ideal, but the extra two furlongs should suit too and with just three career runs as long as he can handle the Epsom track, looks a fast-improving horse. Oh, and the icing on the cake is a certain Frankie Dettori, who is looking for his third Derby win, riding!