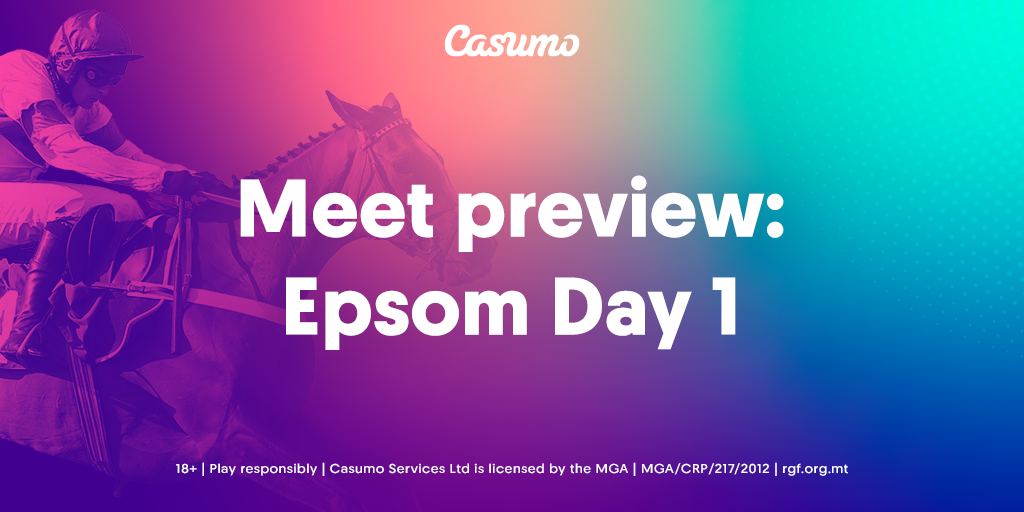 It’s day one of the two-day Epsom Derby Meeting this Friday (4th June 2021). The newly-sponsored Cazoo Oaks at 4.30pm is the third English Classic of the season and the highlight of the day’s action, but there is also a top supporting card that includes the Group One Coronation Cup.
Did you know? 16 of the last 19 horses from stall one in the Epsom Oaks have been unplaced.

Here at Casumo we take a look at the LIVE ITV races, with key trends, stats and our best bets.

CASUMO VERDICT: Drawn in single figures here is a plus, so Maybury, from the 10 stall, is overlooked. While 14 of the last 18 winners came from stalls 5 or lower – good news for DAIRERIN, OSCULA, SIENNA BONNIE, FLAMING RIB and RAGING. Of those drawn higher, the Hollie Doyle-ridden Dusky Prince was a nice winner on debut at Brighton and will be popular, while the Richard Hannon yard have a good record – with that in mind, their Zoltan Star is another to respect. However, the Hannon camp also have another runner – RAGING – in the race and with three career runs under his belt is one of the most experienced in the field. Draw 5 looks ideal and was a nice winner at Haydock last time out, albeit on softer ground – this one gets the nod from the Hannon pair. The other pick is the Tom Dascombe-trained FLAMING RIB. William Buick rides this 2 year-old, who caught the eye when winning by almost 4 lengths at Nottingham last month. Draw 4 is perfect too and having made all that last day we can expect another bold showing from the front here.

KEY CASUMO TREND: 14 of the last 18 winners came from stalls 5 or lower

CASUMO VERDICT: Three of the last seven winners of this race have come from draw 7 – therefore, the Owen Burrows runner Muraad has this stat on his side, but his last two runs have been below average and has a bit to prove. The Mark Johnston yard have a good record in the race, so of those at bigger prices their OVERWRITE (e/w) might be worth a small interest. Yes, recent runs have been poor, but the better ground here will suit and in this better race he gets in with just 8st 8lbs to carry. Corazon Espinado is the only course and distance winner in the field, who ran well last time at Lingfield (2nd), so can’t be discounted either. Mostawaa and Storting are others to respect, but the call is the William Haggas-trained IRISH ADMIRAL. This 4 year-old has only had four career runs, therefore, will have a fair bit of improvement to come. He’s still already shown a good level of form though – winning twice – and certainly wasn’t disgraced when third in a similar race at York last time out over a slightly longer trip.

CASUMO VERDICT: Just the seven runners, but a decent renewal of this Group One. It’s a prize top Irish trainer Aidan O’Brien loves to target – he’s won the race eight times in the last 19 years. He’s got leading chances again this year with the classy Japan and Mogul, who are rated 120 and 119. 2019 Epsom Derby third, Japan, got back to winning ways last time out at Chester in the G3 Ormonde Stakes, but stepping back up to Group One level means he’s got more on his plate here – he can go well, but might just fall short. Mogul was last seen running third in the G1 Prix Ganay in France – form that would see him run well here and having run sixth in the Epsom Derby last season has at least tasted the tricky ups and downs, plus the camber hill of Epsom’s finish – shouldn’t be far away. Pyledriver was only eleventh in the 2020 Derby and despite being top-class his three runs at G1 level now have all been defeats. So that leaves us with the John Gosden runner – AL AASY. Yes, this 4 year-old is stepping up to this top level for the first time, but he’s been more than impressive in winning Group Threes at Newbury this season. He’s won 4 of his seven starts now and based on what we’ve seen this season has come back an improved horse – there should be more to come too! Of the rest, the one at bigger prices, that can outrun her odds, is the only course winner in the field – ALPINISTA (e/w). Being a filly, she gets a handy 3lbs allowance off the rest and that would bring her rating of 113 a lot closer to the main players – she only needs to find 3lbs-4lbs of improvement.

CASUMO VERDICT: Some decent trends to go on here, including 14 of the last 17 winners aged 4 or 5 years-old. That’s a positive for seven of the 11 runners – BLUE CAP, DREAM WITH ME, HMS PRESIDENT, SKY DEFENDER, STRAIT OF HORMUZ, KALEIDOSCOPIC and WATER’S EDGE. Of that bunch though, it’s the two Mark Johnston runners – SKY DEFENDER and DREAM WITH ME – that get the call. The former actually won this race 12 months ago so we know he likes the track and this time of year. Okay, he’s rated 5lbs higher this time, but also ran well here at the track two starts ago (2nd) off this mark. He was 1 ¼ lengths behind another runner here – Victory Chime – that day but is 4lbs better off at the weights this time. Dream With Me will be popular too, having won his last two and three of his last four. Up another 7lbs in the handicap here makes life harder – however, he’s been winning with plenty in-hand to suggest he’s worth sticking with in his current form. Blue Cap, HMS President and former course winner, Data Protection, are three others that can give the selections most to think about.

KEY CASUMO TREND: 12 of the last 17 winners returned 8/1 or shorter in the betting

CASUMO VERDICT: The feature race on the opening day at Epsom, with the third of the English Classics this season – the Group One Epsom Oaks. 1000 Guineas runner-up Saffon Beach has done well this season – however, this step up to 1m4f is a huge unknown for this Jane Chapple-Hyam runner and breeding suggests it will be ‘touch and go’ if she’s able to last home. It’s a race the powerful Aidan O’Brien yard have dominated in recent times, and they are mob-handed to go well again this time with the likely favourite and second favourite – SANTA BARBARA and Snowfall. The last-named was a top winner of the Musidora Stakes at York last month and with that race a decent trial for the Oaks her chance is there for all to see. That was her first try upped in trip and it was clearly what she needed – there could be more to come now stepping up again here. That said, it’s O’Brien’s other main runner – SANTA BARBARA – that looks the more progressive. This well-bred filly is out of former Derby winner – Camelot – so this step up from 1m to 1m4f should be right up her street. She was last seen running fourth in the 1000 Guineas at Newmarket and with that only her second career run is still learning on the job. She’ll find things happening a bit slower over this longer trip. Plus, having shown a few signs of greenness and hanging left in her last race this might not be too big an issue on Epsom’s left-handed course. Of the rest, the Roger Varian pair of Teona and Zeyaadah will provide some strong opposition to the O’Brien pair and have to be considered, as does DUBAI FOUNTAIN (e/w), who actually beat Zeyaadah by a length last time out (getting 3lbs) but is double the price. Finally, it’s worth pointing out that Aidan O’Brien also have Divinely, Willow and La Jaconde in the race and has not been a stranger to landing this prize with a bigger-priced runner over the years.