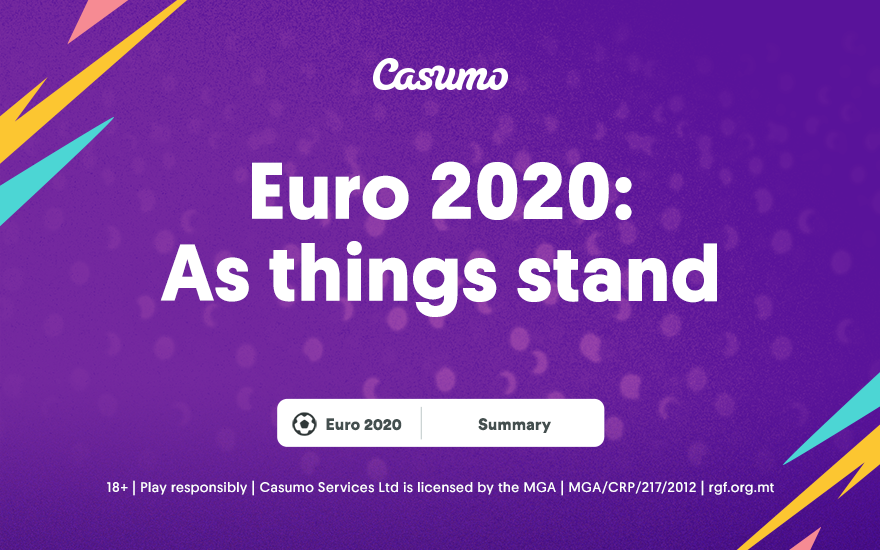 Uncategorized @ie 61 Weeks ago
The first week of Euro 2020 has flown by, and we’ve witnessed some surprising results. Italy, Belgium, and the Netherlands have already secured their last-16 berths, but who else looks set to qualify? Some teams have only played one match, so we will look at the other groups where there have been two Matchdays, and assess their chances of reaching the knockout stages going into the final round of their respective group clashes.

Italy set out their stall early with Euro 2020 intentions

Of all the teams that have caught our attention, Italy would be the standout choice. They have oozed pace and panache, and in Manuel Locatelli and Ciro Immobile up front, Roberto Mancini’s men have stretched the opposition. Having registered back-to-back 3-0 victories against Turkey and Switzerland respectively, Mancini’s men have set their stall out early, and they mean business. Perhaps, it is unsurprising that Italy has seen their odds cut to 13/2 to win Euro 2020.

Italy — who have already secured their qualification from Group A with a game to spare — are likely to be joined by Wales. Gareth Bale and Aaron Ramsey have spearheaded their charge, and they will look to cause an upset in their final group game against the Azzurri. Switzerland, meanwhile, could still finish in the top two if they beat Turkey, and Wales lose to Italy.

Kevin De Bruyne puts Belgium back in the driving seat

Belgium cruised to victory against Russia, but they had a scare against Denmark. While it was a very ordinary display in the first half, Kevin De Bruyne intervened, and he took control of proceedings after he was introduced to the game from the bench for the second half. Belgium will be taking their place in the last 16, and the Red Devils are still fancied to win Euro 2020, as they are priced at 13/2. Roberto Martinez has an abundance of riches at his disposal, and his side can cut opposing teams to shreds if they are at full flow. Nevertheless, the 2-1 win over Denmark should serve as a stark warning they can’t let their levels drop or else they will be punished.

Finland and Russia are both locked in a battle to finish second. For debutants, Finland hasn’t been too fazed by the challenges facing them, and a point against Belgium in their last group game could be enough to see the Finns through to the last 16 of Euro 2020. Russia take on Denmark in their final group game, and the goal difference could settle things in Group B.

Netherlands breeze through into last 16

The Netherlands are always full of energy, and they provide compelling viewing. While things nearly unravelled against Ukraine, they steadied themselves and regrouped. They also beat Austria 2-0 in their second Group C game on Thursday to confirm their place in last 16. Frank de Boer had come under pressure before the start of Euro 2020, but he will have taken some satisfaction particularly from the performance against Austria, and they look back on track. Yet, they may take some convincing to back them in the tournament, as they are dark horses at 14/1.

There will be a lot riding on the Ukraine v Austria decider on Monday, as whoever wins that match will cement a last 16 berth. Ukraine has taken time to settle, while Austria has picked up the pace, although Marko Arnautovic has allowed trouble to follow him wherever he goes. Subsequently, he will sit out the final group game.

What else is up for grabs?

As things stand, Groups D through to F, at the time of writing, have only played one round of matches each. All eyes in particular will be on Group F, which has been dubbed the ‘Group of Death’, and Germany will want to bounce back from their 1-0 reverse against France.