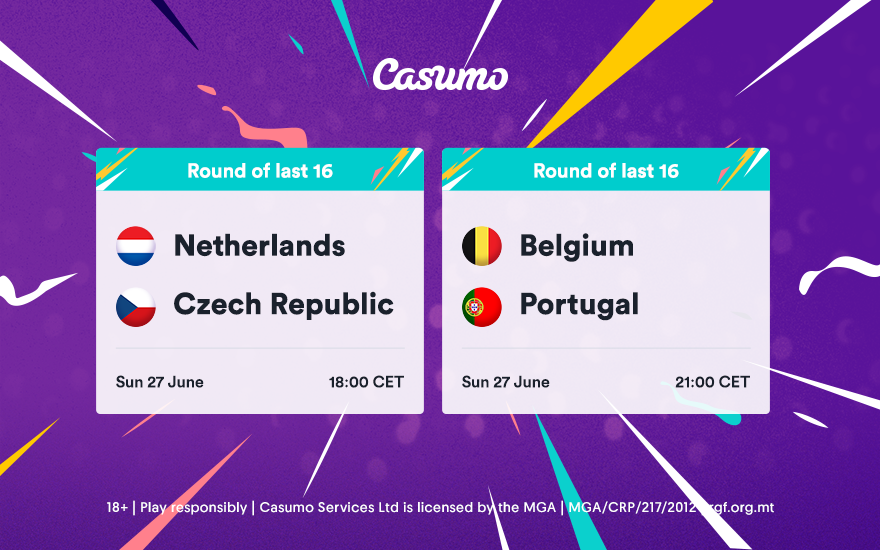 The Round of 16 has thrown up some exciting matchups, in particular Belgium v Portugal, where there is likely to be some fascinating sub-plots. Meanwhile, the Netherlands looked ominous in the group stage. We will also look at how they may fare against the Czech Republic.

There may have been some rather cagey moments for Portugal against France in their final Group F game, but a 2-all draw meant they squeezed through to the round of 16 as one of the four best third-placed teams. And once again, it was Cristiano Ronaldo, who almost single-handedly steered his side through.

He had ice in his vein as he expertly dispatched two spot-kicks. The records continue to tumble for the 36-year-old, who has netted five times at Euro 2020, and he has equalled Iran’s Ali Daei’s record of 109 international goals. Added to that, he has become the first Portuguese to score in all three group games at a Euro, and you will no doubt see his Euro 2020 golden boot odds shorten significantly.

Portugal is desperately clinging on to their European Championship title. While they capitulated on Matchday 2 against Germany, there is plenty of flair in that side. That will augur well for them and, as things stand, they are currently 21/10 to beat Belgium.

If we turn our attentions to Belgium, they still have a point to prove that this ‘Golden Generation’ of footballers can make their potential count. The only real scare came on Matchday 2 in Group B when they fell behind against Denmark before Kevin De Bruyne swung the game in their favour, and they ran out 2-1 winners.

Romelu Lukaku has looked formidable up front, while Jeremy Doku has already shown he is an exceptional talent, as he gave Finland the runaround. Roberto Martinez has all the ingredients, and now it’s just a case of blending them together against Portugal. You can currently get odds of 6/4 for the Red Devils to move into the quarter-finals.

In case you didn’t already know, Netherlands right-back Denzel Dumfries is named after Oscar-winning actor Denzel Washington. So far, Dumfries has been instrumental for the Netherlands with his probing runs, and he’s already netted twice at the European Championships.

There had been some pressure piled on current incumbent Frank de Boer prior to the tournament. While the 3-2 win over Ukraine in their opening Group B game may have been a bit too hairy for his liking, the Oranje haven’t looked back since. Of course, the disappointment of not qualifying for Euro 2016 still lingers. But this Netherlands side has plenty of panache going forward. Georginio Wijnaldum has been a world-beater, combining excellently with Memphis Depay, and they will cause the Czech Republic problems.

At present, the Netherlands is 33/100 to go through to the quarter-finals, and if they can keep up their high-intensity football, they will be difficult to stop in their tracks.

Meanwhile, the Czech Republic is no pushover, and they aren’t here to make up the numbers. The 2-0 win over Scotland on Matchday 1 in Group D signalled their intentions. If they can get Patrik Schick involved, then he will be key. His halfway line strike against Scotland was sublime. While the Czech Republic barely threatened England in their final group game, they should not be taken lightly.

Of course, things have changed a lot since then, but the Czech Republic appears to be a well-drilled unit. The most important task for them is to manage the game well. They must not take any undue risks against the Netherlands, who will capitalise on any kind of lapse in concentration.