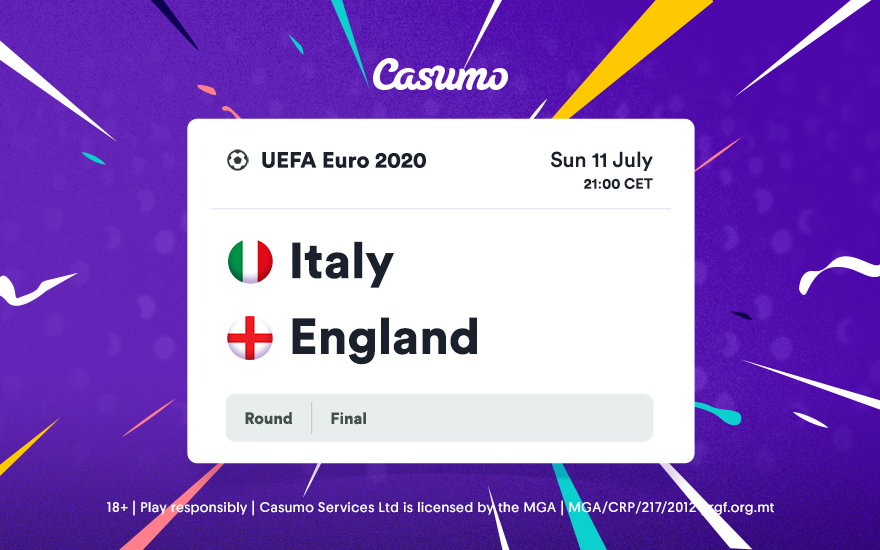 And then we were down to two. After four weeks of enthralling action, the Euro 2020 final will take place on Sunday at Wembley. Dutchman Bjorn Kuipers will be officiating the final, and he will have a task on his hands trying to control what could be a feisty encounter between Italy and England. With England on the precipice of history, can they exorcise another demon? Read on for our full preview, including tips.

After what has been a turbulent 16 months due to the COVID-19 pandemic, England put a huge smile on the faces of fans, as they booked their place in the final. Denmark were more robust and obdurate opponents than Ukraine in the quarter-finals, as England required extra time to win through to their first major final in 55 years.

It was a nerve-jangling affair as England had to come from behind after Mikkel Damsgaard fired the Danes ahead with a stunning free-kick on the half-hour mark. But an own goal from Simon Kjaer, and then a Kane goal in extra-time, has left England with a golden opportunity to finally get their hands on a trophy. England has been constantly talked up in the Euro football betting tips, and although it took time for them to settle into the tournament, they are hitting their peak at just the right time.

England must go beyond the call of duty once again in the final, but Gareth Southgate’s men have purged any demons they previously had. There is an unshakeable belief in the squad, England has the firepower to see off Italy. Currently, England are trading at 8/5 to beat Italy in the final. While there are three teams that have won the Euro final as host nations, Southgate will also need to be wary that Portugal (2004) and France (2016) were toppled on home soil.

A special mention surely has to go to Roberto Mancini. After breezing through the group stages where they enjoyed swashbuckling 3-0 wins against Turkey and Switzerland respectively, Italy has had to revert to type since the Round of 16. Nevertheless, Mancini has moulded his side into one that is fearless on and off the ball. Italy has arguably been more defensive in the knockout stages, but they have shown a killer instinct whenever the opportunity has presented itself.

Mancini’s side is now unbeaten in 33 matches, and the Azzurri richly deserve their place in the final. Although nerves were frayed at times in the semi-final against Spain, Jorginho was ice cool when he slotted home the winning spot-kick.

Italy boasts plenty of attacking weapons. But in Giorgio Chiellini and Leonardo Bonucci, who have a combined age of 70, Italy have two defensive warriors that can snuff out any danger. The Azzurri, who reached the final of the Euros in 2012, were completely outplayed by Spain in Kiev. On that night, they were hammered 4-0, but against England, Italy will have a different mindset.

In terms of the head-to-head, Italy have won 11 of the 27 clashes, with England prevailing on eight occasions. More significantly, Italy have yet to taste defeat to the Three Lions at a major finals. As things stand, Italy are 39/20 to come out on top against England, and Ciro Immobile is backed at 29/10 to score at anytime for Italy. And Italy will relish the role of playing party pooper, and bursting England’s bubble.

Who will win the Golden Boot?

The Golden Boot award always sparks debate. As things stand, Cristiano Ronaldo is still heading the Euro 2020 top scorer odds, as he has rattled home five goals in the tournament. Kane currently has four, but could he grab a double to pip the Portugal legend to the prize? All will be revealed on Sunday.