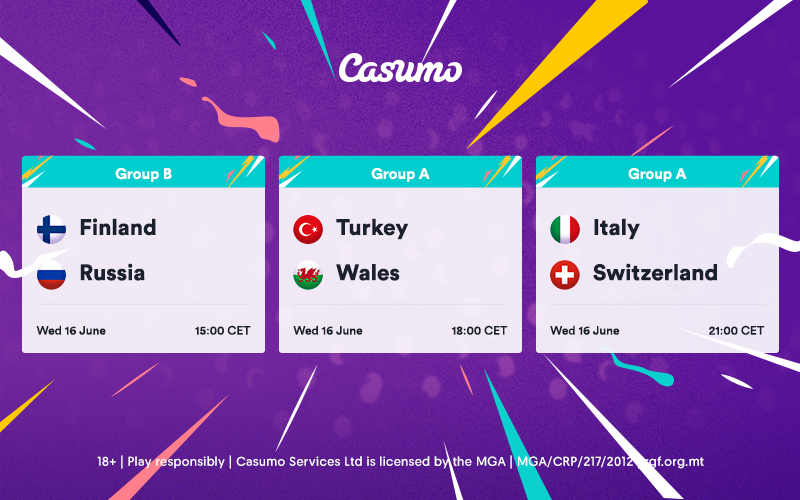 Setting the tone, and getting off to a good start, is imperative at any major international tournament. Italy certainly did just that. They laid down a marker of their intent with a sensational 3-0 victory over Turkey in the opening game of Euro 2020 on Friday night. Roberto Mancini’s men zipped the ball around with pace, and they were menacing every time they went forward. Ciro Immobile scored, and he teed up Lorenzo Insigne for a classy finish 10 minutes from the end of the game to wrap up a comfortable win. Italy overwhelmed Turkey as they racked up 24 attempts on goal and enjoyed the majority of possession (63%). Switzerland may have learned a thing or two from the Azzurri’s win, but if Italy can keep up the same tempo, Switzerland may struggle to contain them. Italy is a short 3/5 to collect three points against Switzerland.For Switzerland, they will have been disappointed by their draw against Wales in their opening game. Breel Embolo caught the eye as he was direct, and he planted home a header to give the Swiss the lead four minutes after the restart. However, they were denied by Kieffer Moore, who flicked the ball with his head into the bottom corner of the net.Had it not been for Danny Ward, then Switzerland may have run rampant. Nevertheless, there were some encouraging signs for the Swiss, and they will relish facing Italy. Embolo is at 5/1 to add to his tally against Italy.

Against Italy, Turkey offered very little going forward, and they looked brittle at the back. Although the own goal scored by Demiral as he tried to cut out a cross by Domenico Berardi was unfortunate, Turkey was very much second best.

It is clear from the outset how much of a blow being without Cenk Tosun is. Maybe attack could well be the best form of defence, but Turkey can’t go too gung-ho, or else they will get picked off by Gareth Bale and co. Turkey is better than what they have shown, well at least their win over France in qualifying wasn’t a complete fluke! At the time of writing, Turkey is 13/10 to beat Wales on Wednesday.

For Wales, meanwhile, the Red Wall traveled only in their hundreds to Baku, so the locals made it a more cavernous atmosphere. Wales had to soak up some pressure from Switzerland, and Embolo was a handful. Wales coach Robert Page reverted his formation to 4-2-3-1, and for long periods, the tactical change didn’t pay off. However, you would expect them to get their act together, and leave Baku with three points this time around.

As well as making their debut at the European Championships, Finland also endured an emotional rollercoaster. The sight of Denmark midfielder Christian Eriksen collapsing on the pitch was deeply worrying, but when the match resumed, Finland held their own, leaving it very late to pinch all three points thanks to a Joel Pohjanpalo header. Currently, Finland is rated at 5/1 to return maximum points from their first two group games.

In stark contrast, Russia was left flailing against Belgium in their opening Group B match, and they crashed to a 3-0 defeat. Russia was bullied at times by Romelu Lukaku, who fired in two goals. The former Manchester United striker admitted he was ‘scared’ when the news surrounding Eriksen filtered through. Speaking after the game, he said: “It was difficult to play the game. I hope he is healthy, and I dedicate this performance to him.”

Finland was expected to be the whipping boys of Group B, but they could well pick up another priceless win against Russia, which would alleviate any pressure against Belgium.