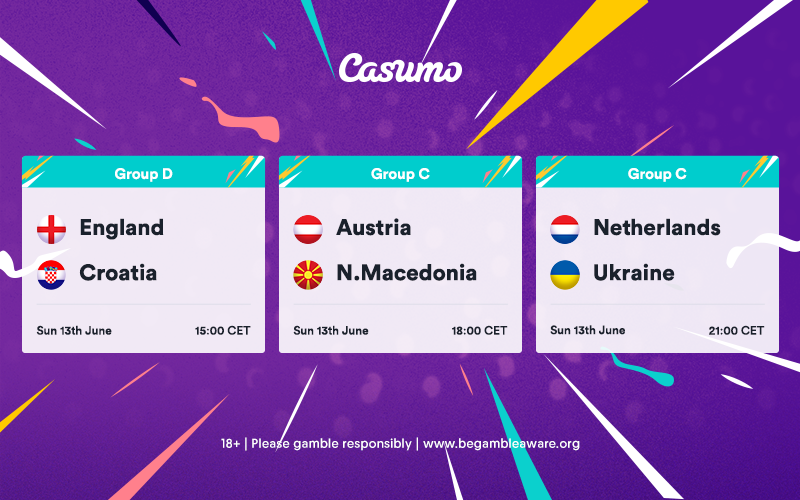 Euro 2020 Betting tips all gamesSport 62 Weeks ago
England will be hoping to end their 55-year wait for an international trophy at Euro 2020. Expectation levels from the fans and media will inevitably soar, but can they deliver? Elsewhere, the Netherlands will be one of the dark horses, and they are always fun to watch. In this preview, we will look ahead to three opening group games — England v Croatia, Netherlands v Ukraine and Austria v North Macedonia.
Sign up to bet on Euro 2020

For England, build-ups to major tournaments are never usually quiet. Although the Three Lions warmed up with a 1-0 victory over Austria earlier this week, thanks to a Bukayo Saka strike, Gareth Southgate has an injury headache to contend with.

Liverpool’s Trent Alexander-Arnold — who was one of four right-backs chosen by Southgate for his Euro 2020 squad — has been ruled out of the tournament with a thigh injury. Meanwhile, Harry Maguire is a doubt for the group stages. Nevertheless, England is expected to coast through Group D, and they are currently trading at 11/2 to lift a maiden European title.

Croatia, meanwhile, will be the visitors to Wembley on June 13, and they will have fond memories of knocking England out at the World Cup semi-finals three years ago. A Mario Mandzukic strike in extra-time proved to be the difference between the sides. Zlatko Dalic has plenty of big guns, that can turn a game in their favour, at his disposal. This includes Luka Modric and Ivan Perisic, who could make life difficult for England. This Group D clash could well end up being a draw.

The Netherlands usually come to life at major tournaments, and they always play an exciting brand of football. Although Frank De Boer has only mustered four wins from his nine games in charge, the fans will expect them to go far at Euro 2020.

There is certainly enough talent in his squad, especially with the likes of Memphis Depay and Frenkie de Jong. Hopefully one of these two will be able to provide the creative spark the Oranje require. As long as they don’t go through the motions, then the Netherlands should have enough to overcome Ukraine on June 13. De Boer’s men can currently be backed at 13/20 to take three points from their opening Group C game.

For Ukraine, it is a tough starter. However, they will fancy their chances of qualifying for the last 16. Andriy Shevchenko is taking Ukraine to their first international tournament as coach, and he has a solid group of established players in his squad, including Manchester City full-back Oleksandr Zinchenko. While Ukraine will make things competitive, the Netherlands could end up running out comfortable winners.

North Macedonia could well end up being the whipping boys of Group C. They will want to give a good account of themselves, as they are taking their bow at an international tournament. Veteran striker Goran Pandev is their standout player, and he will need to be fed chances. But for their opening Group C clash with Austria, North Macedonia are currently outsiders to clinch three points at 11/2.

Meanwhile, Austria will take heart from their performance against England in the friendly even though it resulted in defeat. Austria enjoyed more possession in the game, and they fashioned more shots too, and Marcel Sabitzer tested Jordan Pickford.

Austria should prove to be too strong for North Macedonia, and a win will set them up nicely, especially as they will most likely be battling with Ukraine for the second spot in the group.