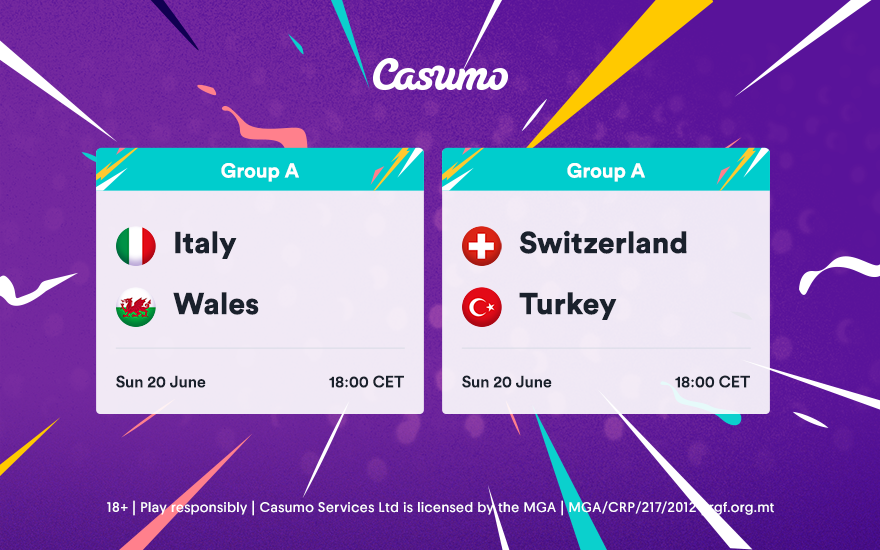 Group A has made for fascinating viewing, and Italy look fully revitalized under Roberto Mancini. Wales have also made the right noises, while Switzerland and Turkey have both looked overawed. In this preview, we will look ahead to Matchday 3, which sees Italy tackle Wales, while Switzerland and Turkey face each other in what is essentially a dead rubber. We will also check in on the latest match odds for both these games.

It may only be early days, but Italy are already beginning to look like serious contenders. So far, they have been a revelation at Euro 2020. If thrashing Turkey 3-0 wasn’t impressive enough, they followed that up with another blistering display against Switzerland, chalking up another 3-0 victory to make serene progress into the last 16. Mancini’s calvary oozed panache and pace, and the Swiss couldn’t live with them.

Manuel Locatelli underlined a terrific display with two goals, while Ciro Immobile was also on target, despite squandering a few chances. Italy have now extended their unbeaten run to 29 games, and they have also gone nearly 1,000 minutes of competitive football without conceding.

Gianluigi Donnarumma was rarely tested, but on the rare occasion he was called upon, he answered the question superbly with a double save. The only concern was that of Giorgio Chiellini, who was forced off with a suspected hamstring injury, although it is unclear whether he will be ruled out against Wales. Nevertheless, Italy have already put their rivals on notice with some terrific performances. Italy have been flawless to date, and they are priced at 12/25 to beat Wales, which would see them top Group A with maximum points.

Wales, meanwhile, have come into their own. On Wednesday, Wales claimed their first victory of Euro 2020 with a 2-0 win over Turkey. Robert Page’s men barely put a foot wrong, and at times, they ran Turkey ragged. Gareth Bale and Aaron Ramsey sparkled as Wales came to life under the night skies of Euro 2020’s eastern outpost.

Bale and Ramsey summoned the spirit of Euro 2016, where the Welsh reached the semi-finals of the tournament. As things stand, they have all but booked their ticket to the last 16 of Euro 2020. Wales have a much better goal difference than third-placed Switzerland, but can Page’s men defy the odds and beat Italy in Rome on Sunday? Wales are at a tempting 7/1 to pull off their own Italian job.

Turkey may have had their work cut out against Italy and Wales, but their performances to date have been abject. Five goals conceded, and none scored in two games has been a dreadful return for a country that previously finished third at the 2002 World Cup.

Gunes’ men were overpowered against Italy and Wales, and they are destined to finish with the wooden spoon in Group A. Speaking after the defeat to Wales, Gunes said: “I don’t remember us making so many errors in passing, ever.” The error-strewn display has contributed to their downfall, and all they have left to play for is pride. So, it will be interesting to see if Turkey can notch up a win or go with barely a whimper.

Switzerland, meanwhile, haven’t been as woeful as Turkey, and had they held on against Wales, well maybe it might have been a different story. Four of the best third-placed teams will qualify for the last 16; however, Switzerland’s current goal difference (-3) may not necessarily help their cause.

However, Breel Embolo did catch the eye against Wales, and he can leave the tournament with his head held high if the Swiss bow out at the first hurdle. Switzerland are 3/4 to see off Turkey in their final group game.