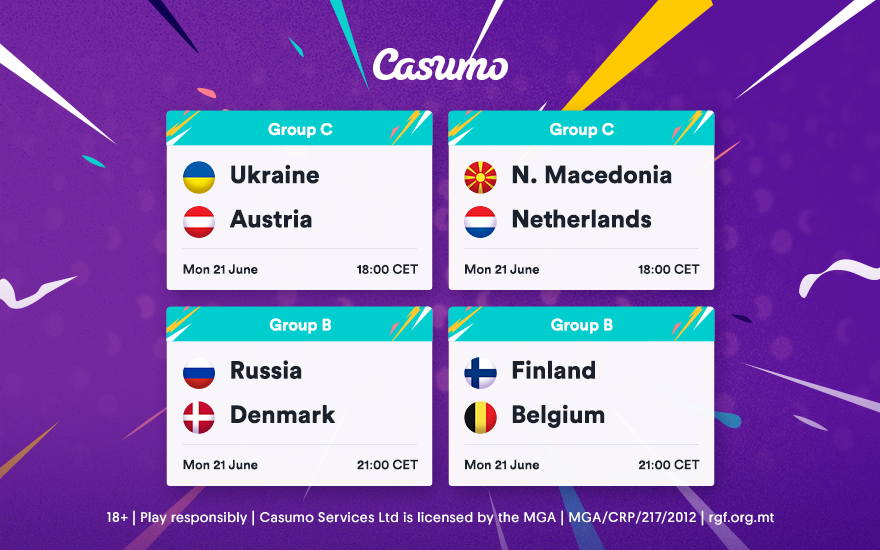 There are four cracking matches to look forward to on Matchday 3, and for some teams, there is still plenty to play for. In this preview, we will give the lowdown on North Macedonia v Netherlands, Finland v Belgium, and Russia v Denmark.

The Netherlands will indulge in the celebratory atmosphere in the Johann Cruijff Arena when they take on North Macedonia later today. After qualifying for the last 16 with a game to spare, the Netherlands will be buoyant mood going into this dead rubber. Of course, Frank de Boer won’t allow his troops to take their foot off the pedal, and he will be demanding a professional performance to wrap up maximum points from Group C. Denzel Dumfries has impressed, and with two goals to boot so far this tournament, he will be eager to add to his tally against North Macedonia, and it could see his euros golden boot odds cut short.

Nevertheless, while North Macedonia will be packing their bags early, they will have learned a lot from their first major tournament. Igor Angelovski’s men have been rather refreshing in their approach, but they have afforded their opponents too many chances. A cursory glance at the odds shows North Macedonia are at a long 23/2 to beat the Netherlands, but it would certainly give their fans something to shout about.

Belgium has already secured their place in the last 16, and it seems likely they will top Group B. It will be fascinating to see if Roberto Martinez rings in the changes to give some squad members more game time. Nevertheless, after a shaky performance against Denmark, the Red Devils are back in the groove. Belgium’s defensive problems were clear for all to see against Denmark, but with Kevin De Bruyne expected to start against Finland, he will likely pull the strings. Belgium is 33/100 to notch up three points against Finland.

Of course, Finland will take heart from Denmark’s display against Belgium. The permutations for Finland to qualify as runners-up will be if they draw or beat Belgium, and Russia loses to Denmark. Finland could recall Tim Sparv — who underwent knee surgery in March — against Belgium, and this would be a big boost.

Group B appears to be delicately poised. Russia is in a scrap with Finland to finish second, however, if Finland were to stun Belgium, and Russia beat Denmark, then Belgium, Russia, and Finland would all finish on three points. However, goal difference would come into play. Russia struggled against Belgium, but a 1-0 win over Finland, kept their hopes alive, and their fate is in their own hands going into the Denmark clash.

On the other hand, Denmark’s minds have arguably been elsewhere after Christian Eriksen collapsed against Finland. While Denmark produced a spirited display against Belgium, they came up short. Nevertheless, the Danes are priced a short 7/10 to collect three points against Russia.

For Ukraine, they are in touching distance of a last 16 spot. A 2-1 victory in their last Group C game against North Macedonia ended a run of six successive European Championship defeats, and in Andriy Yarmolenko, they have a player who can make things happen, and grab a game by the scruff of the neck. A victory over Austria will rubber stamp the second spot in Group C, and they are priced 13/5 to do so.

For Austria, they looked ordinary against the Netherlands, as they were outclassed from the first whistle. Austria will have to buck up their ideas if they are going to overcome a resurgent Ukraine.