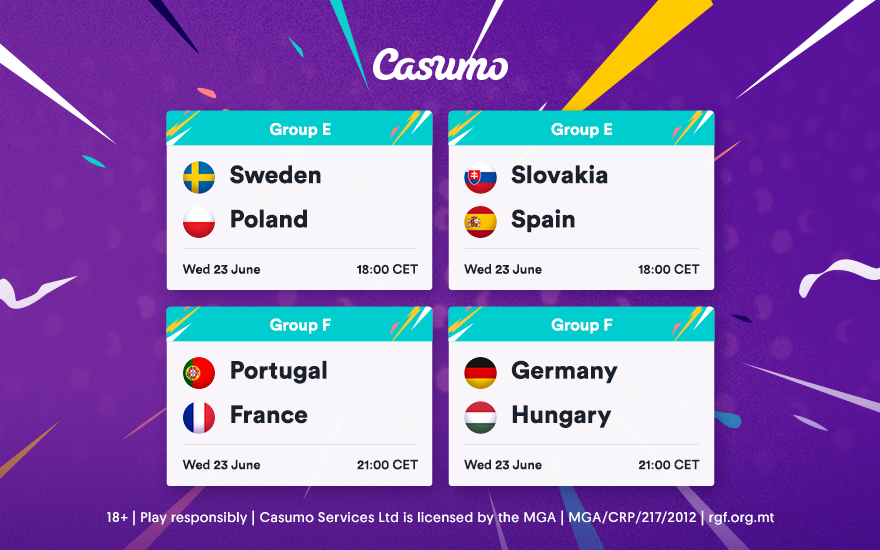 Some teams have already secured their progress to the last 16. However, on Wednesday evening, we shall see which teams from Groups E and F will be joining them. There is still plenty to play for, and we will look ahead to four crucial games on Matchday 3. These are: Portugal v France, Germany v Hungary, Slovakia v Spain, and Sweden v Poland. Read on to find out how we see these games panning out.

As things stand, France aren’t guaranteed to reach the last 16. They were nearly humiliated by Hungary last weekend before Antoine Griezmann equalized 24 minutes from time to spare France’s blushes. Griezmann’s goal was his 11th overall at major international tournaments, with only Michel Platini (14), Just Fontaine (13), and Thierry Henry (12) netting more. Whereas Kylian Mbappe was frustrated against Hungary, as he managed six attempts on goal without finding the target.

France has four points to their name from two games, which has been enough for other teams to advance to the knockout stages, however a win will secure top spot in Group F. Didier Deschamps has some big decisions to make against Portugal, and he has to figure out a way to get the best out of his talented crop of players. Currently, France are 5/4 to pinch three points against Portugal.

For Portugal, it simply has to get a result. Against Germany last weekend, they started brightly, but they faded, and they were torn to shreds. Cristiano Ronaldo has fired home three goals this tournament, and he will naturally be a serious contender in the Euro 2020 top scorer odds. If they can recapture the form they showed against Hungary, Portugal could avoid an early exit.

In their opening group game against France, Germany were inhibited, and far from vigorous in attack. Despite falling behind against Portugal in their second group game, Joachim Low’s men found their rhythm, and they were more incisive going forward. Robin Gosens was hugely influential, and they looked dangerous going forward. While Group F is still wide open, Germany is a short 1/6 to claim victory against Hungary.

While Hungary showed some signs of a revival against France, they could be in for a long evening, especially with the likes of Serge Gnabry running in behind them. Portugal exploited Hungary’s weaknesses on Matchday 1, and Germany could run out comfortable winners if they hit top gear.

Spain have been surprisingly predictable at Euro 2020, and their lack of urgency in attack has been alarming. While the likes of Alvaro Morata have spurned gilt-edged chances, they are still winless, and they will be looking for a marked improvement from the 1-1 draw against Poland last weekend. There has been a lack of bite so from Enrique’s charges, but perhaps against Slovakia, their fortunes could change.

Slovakia, meanwhile, were narrowly beaten by Sweden last Friday, with Emil Forsberg’s penalty proving the difference between the two sides. The loss will have hurt Slovakia, who had been on a six-match winning streak. Slovakia, however, are long shots at 15/1 to upset Spain.

For Poland, the situation is simple. They must win to advance to the last 16. Robert Lewandowski, who was isolated in Poland’s opening-game defeat against Slovakia, notched up his first goal of the tournament against Spain, and that will give him, and his country a much-needed lift against Sweden.

For Sweden, they are already through, so for them, there is little riding on the result of this game. Poland are trading at 31/20 to beat Sweden, but Sweden will want to go through to the last 16 as Group E winners to give themselves a slightly more favourable tie.