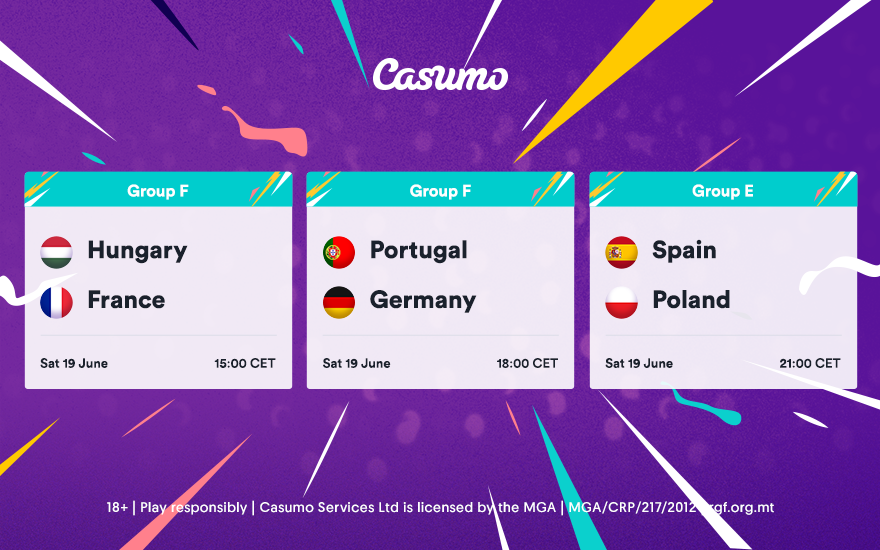 After a riveting first round of Group F matches, we’re eagerly looking forward to Match Day 2 to see how things pan out in the ‘Group of Death’. We will look ahead to Portugal v Germany, and Hungary v France, while we will also check in on the Euro 2012 winners, Spain, to suggest how they may get on in their Group E clash with Poland.

Appearing at his fifth European Championship Finals is an impressive feat in itself. However, Cristiano Ronaldo also shattered Michel Platini’s goals record. Ronaldo and his Portugal teammates looked like they were going to be frustrated against Hungary, but the reigning Euro 2016 champions found a way to secure the win.

After showing composure from the penalty spot for his first goal, Ronaldo added a second in stoppage time. He shifted the ball past Hungary’s goalkeeper Peter Gulacsi, tucking the ball home with his left foot for his 11th Euro goal. Portugal shrugged off any fears in front of a 60,000-capacity crowd in Budapest, and it’s clear that they will be a force to be reckoned with.

However, they will be coming up against a wounded Germany, who were far from their best against France on Tuesday. Joachim Low’s charges succumbed to defeat after a Mats Hummels own goal. It was disastrous for Hummels, who was recalled for Euro 2020 after previously been told by Low his international career was over. Karim Benzema also had a goal ruled out for France. For Germany, their clash with Portugal is a must-win game. They are trading as the marginal favourites at 7/5 to keep their Euro 2020 hopes alive.

Could there be another masterclass coming from Paul Pogba? While the midfielder has struggled to produce on a consistent basis for Manchester United, he feels at home on the international stage. Against Germany, Pogba turned in an all-action display, and he was named UEFA’s ‘star of the match’ after France’s 1-0 win over Germany.

He showed flair and vision, and it was his wonderfully lofted pass with the outside of his boot that led to the only goal of the game. The 2018 World Cup champion has always been hungry, and Pogba admitted Germany’s defender Antonio Rudiger took a little bite. He said: “I think he nibbled at me a little bit, but we’ve known each other for a long time.”

How will Hungary manage to thwart the threat of France? Against Portugal, they provided stubborn resistance with Gulacsi pulling off some fantastic saves. However, France can carve teams open at will. Hungary will have to stifle a side that has grit and guile in midfield, as well as a cutting edge up front. Hungary’s stay at Euro 2020 could be short-lived, and they are 21/2 to stun France on Saturday. But if they did pull it off, it would be one of the biggest shocks in European Championship history.

Spain v Poland Betting tips — When will the real Robert Lewandowski stand up?

Poland will be desperate to make amends after slumping to defeat in their opening Group E game against Slovakia. What was noticeable was that Robert Lewandowski, who scored 48 goals for Bayern Munich last season, barely had a sniff all match. This was a testament to how well Slovakia played. And wouldn’t it be amazing if Poland could upset Spain?

The tiki-taka style of Spain is what we are accustomed to, but now they seem to be taking more opportunities to cross the box. If only Alvaro Morata could stick the gilt-edged chances that come his way. Spain were held to a draw against Sweden in their opening group game, but if they bring their finishing boots on Matchday 2, they should secure three points. Indeed, La Furia Roja are 7/20 to see off Poland.