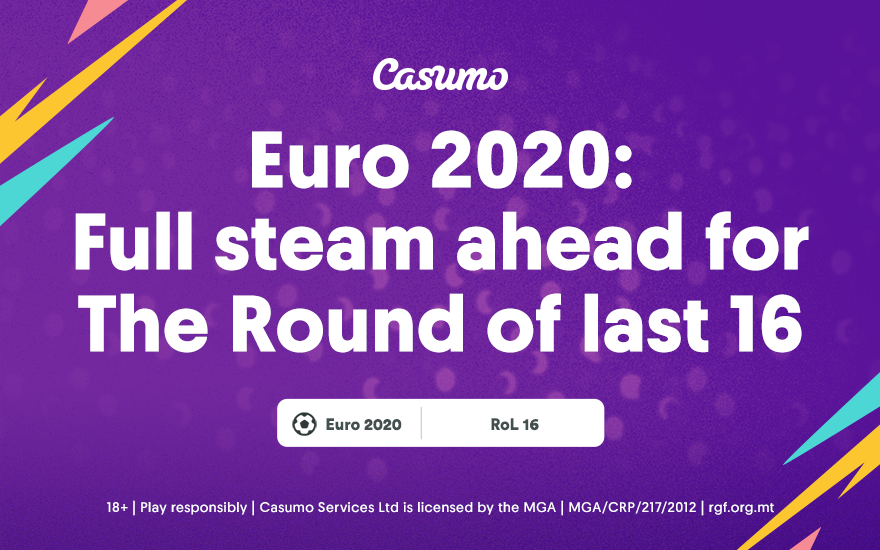 Euro 2020 Predictions: Full steam ahead for the round of 16

After nearly two weeks of entertaining group-stage action, Euro 2020 is now entering the knockout stage, and we’re slowly inching closer to finding out who will lift the trophy at Wembley on July 11th.

By all accounts, it was a hugely entertaining group stage, with plenty of goals and drama. With the last 16 set to get underway at the weekend, let’s do a quick recap of how each group was concluded.

With Italy getting off to a fast start in Group A, it was no surprise to see them come out on top spot with three wins from three. Their final match against Wales was hardly a classic, but Matteo Pessina’s first-half strike was enough to earn the victory.

Wales progressed as group runners up, while Switzerland claimed a place in the last 16 following a 3-1 win over Turkey in Baku. It was a relief for the Swiss to get a win on the board, having failed to impress in their opening two matches.

Belgium were always likely to be the dominant team in Group B, although it wasn’t as easy as nine points from three matches suggests. They hammered Russia in their first match, but Denmark made them work hard to come from behind in Copenhagen, and Finland also made it tough in their final match before Belgium eventually won 2-0.

Second place went to Denmark, who produced a memorable performance to trounce Russia in the last 16. The win was made all the more poignant by the scenes that accompanied Christian Eriksen’s collapse in their opening game against Finland, but with Eriksen out of hospital and on the road to recovery, Denmark can focus on going on a memorable run at Euro 2020.

Another group with clear favourites, the Netherlands found life pretty comfortable as they recorded three wins from three. Their 3-2 win over Ukraine to kick things off was fraught at times, but a 2-0 and 3-0 triumph over Austria and North Macedonia respectively meant the Netherlands’ passage to the last 16 was pretty straight forward.

Austria claimed the runners-up spot after beating Ukraine in their final match, although Ukraine did squeeze through to the knockout stage with their single victory over North Macedonia. Sadly for the lowest-ranked team in the Euros, all three matches ended in defeat.

The main talking point of Group D was the mouth-watering clash of old rivals England and Scotland, but the match failed to live up the billing, ending in a 0-0 draw. 1-0 wins against both Croatia and the Czech Republic saw England top the group, and while it wasn’t vintage stuff from Gareth Southgate’s men, they got the job done.

Croatia advanced as runners up, with their 3-1 win over Scotland at Hampden Park bumping the Czech Republic down to third place, although the Czechs did progress as one of the best third-placed teams. Scotland’s return to the international tournament scene yielded just a solitary point.

It was anticipated that Spain would dominate Group E, but the Spanish failed to get going in their opening two matches, drawing 0-0 with Sweden and 1-1 with Poland. However, Spain finally found their rhythm in their final game against Slovakia, running out 5-0 winners in Seville.

But top spot went to Sweden following some late drama. They had led Poland 2-0 before Robert Lewandowski dragged his side back into it. With the score level at 2-2, Viktor Claesson popped up in injury time to grab a winner and eliminate Poland. Slovakia’s win over Poland earlier in the tournament was not quite enough to get them through.

Dubbed the ‘group of death’ in the build-up to the tournament, Group F pitted France, Germany and Portugal against each other, with Hungary making up the quartet. It was France who ultimately did enough to top the group, though they were far from convincing. A win over Germany was followed by draws against both Hungary and Portugal, but they’ve done their job in setting up a last-16 tie against Switzerland.

The final round of fixtures saw plenty of drama, and no-one knew which way things were going to finish until the final whistle. Hungary gave Germany a massive scare in Munich, but the Germans did enough to secure a 2-2 draw and advance as runners up. Portugal’s four points were enough to see them through in third place.

Here’s the draw and schedule for the last 16 in full: