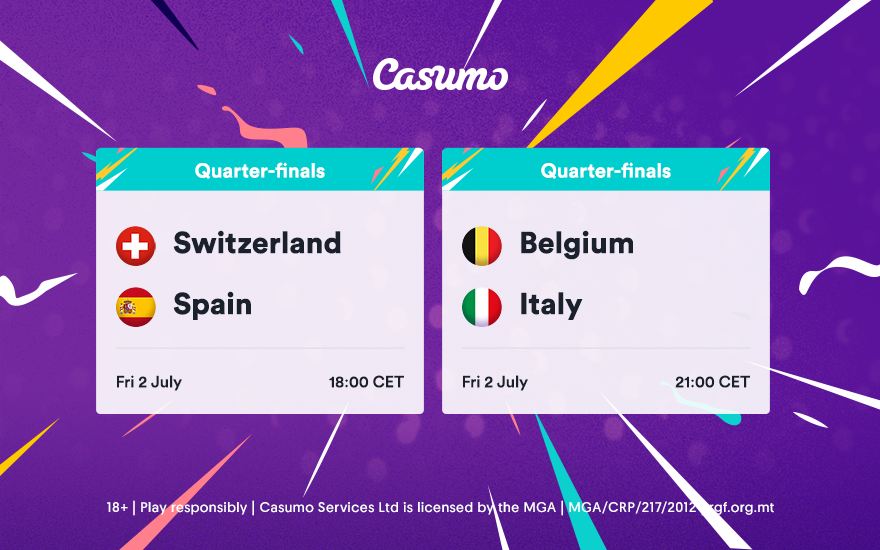 Euro 2020 has thrown up so many surprises so far with many of the big guns eliminated from the tournament earlier than anticipated. Nevertheless, with the quarter-finals nearly upon us, we will preview here the first two ties — Belgium v Italy, and Switzerland v Spain. So, read on to see how these games may unfold.

Belgium’s preparations for their quarter-final clash with Italy has been dominated by the fitness concerns of Kevin De Bruyne and Eden Hazard. After a feisty 1-0 win in their Round of 16 clash against Portugal, the Red Devils were on the receiving end of some rough challenges. De Bruyne, was hacked down shortly before the first half, while Hazard pulled up moments before the final whistle. Both are considered big doubts to face Italy, as Belgium’s ‘Golden Generation’ seek to lift their first major trophy under Roberto Martinez.

Against Portugal, Belgium showed great defensive resolve as they faced a tournament-high record of 23 attempts from the Euro 2016 champions. Romelu Lukaku, who has been currying favour in the Euro 2020 golden boot odds, and has three goals to his name, was tamed last weekend. But Thorgan Hazard produced a moment of brilliance when he settled the game with a brilliant 25-yard strike shortly before the end of the first half. Belgium are currently 12/5 to beat Italy.

During the run-up to the tournament, Italy weren’t courting much attention in the Euro 2020 betting tips. But their performances to date have made everybody sit up and take notice. The Azzurri had to dig deep to see off a spirited Austria in the Round of 16, but Roberto Mancini’s men have now gone 31 games unbeaten since he took charge.

There are however, three players walking a tightrope for Italy. If Nicolo Barrella, Giovanni Di Lorenzo or Matteo Pessina get booked, they will miss the next match. There has been a sense of togetherness about Italy in this tournament, and Ciro Immobile will fancy adding to his tally in the tournament. He is currently valued at 23/10 to score at anytime during the 90 minutes.

By taking out France, Switzerland sent some shock waves through Euro 2020. It was perhaps the biggest shock of the tournament, especially as they recovered from a 3-1 deficit before emerging victorious on penalties. In reaching the last eight of Euro 2020, it is the first time the Swiss have managed to get to the quarters of a major tournament since the World Cup in 1954.

Although captain Granit Xhaka is suspended, Switzerland played without abandon against France, and they will be eager to claim another major scalp. Swiss boss Vladimir Petkovic has hit on a great system, and his side feel like they can compete with the very best. Haris Seferovic, in particular, provides a great aerial threat, and he can cause problems for Spain. Switzerland are currently priced at 9/2 to beat Spain, and reach the semi-finals.

Despite taking time to warm up in the tournament, Spain have been in free-scoring mode, and they became the first side in European Championship to score five goals or more in consecutive games. The 5-3 victory over Croatia was pulsating, and Luis Enrique’s men were relieved they came through that one in extra-time as they were pushed very hard.

Switzerland won’t be an easy opponent for Spain, who are looking to scale the pinnacle of European football once again after claiming the spoils at Euro 2012.