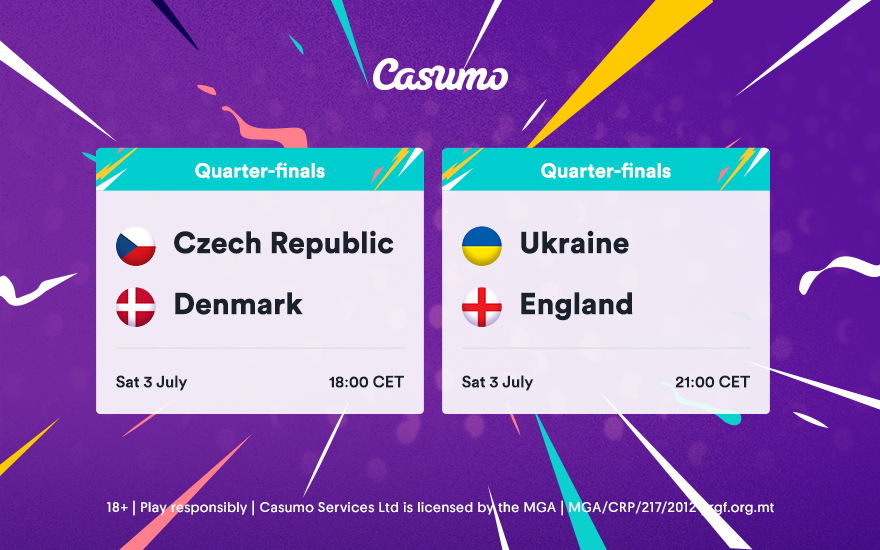 Euro 2020 has provided moments of sheer drama, and it has made for compelling viewing. You can’t take anything for granted, and in the quarter-finals on Saturday evening, we will see Ukraine pit their wits against England, while Denmark lock horns with the Czech Republic. Read our preview to see how we think these two ties might unravel.

For too long, Germany has been a roadblock to England’s chances of success at a major tournament. But for Gareth Southgate, who was part of the Euro 96 side that lost to Germany in the semi-finals, it was the ultimate redemption, as his side ran out 2-0 winners. Raheem Sterling, who has been England’s talisman during the tournament, provided the Three Lions with the breakthrough before Harry Kane got off the mark at Euro 2020 with a stooping header to seal a memorable win.

The victory caused scenes of wild celebrations in Wembley, as more than 40,000 England fans packed into the ground to witness the historic moment. While Sterling and Kane will take the plaudits, England is still yet to concede a goal, and they were well marshalled by Harry Maguire. Indeed, the last time England kept a clean sheet in their first four matches was at the 1966 World Cup, and we all know what happened there!

England was widely fancied in the Euro betting tips before the start of the tournament. They are currently trading at 2/5 to shine in Rome this weekend to punch their ticket to the semi-finals.

Ukraine, meanwhile, is steely, and they have emerged as one of the surprise packages of Euro 2020. After creeping through the group stages, Andriy Shevchenko’s charges cemented a quarter-final berth by edging out Sweden 2-1 after taking the game to extra time at Hampden Park earlier this week.

Oleksandr Zinchenko — who became Ukraine’s youngest ever goalscorer at the Euros — gave Ukraine the lead with a powerful drive before Emil Forsberg levelled things up for Sweden with a deflected effort. However, Artem Dovbyk had the final say with a late header to set up an intriguing showdown with England. But Ukraine is a distant 9/1 to pull off an upset.

When it came to the Euros golden boot odds, Patrik Schick wouldn’t have ranked highly. But Schick has been firing on all cylinders, and he has hit a real purple patch at Euro 2020. His strike against the Netherlands took his tally to four for the one tournament, and he is now the active top-scorer.

Jaroslav Silhavy has his men perfectly fine-tuned, and while the 2-0 win over the Netherlands in the Round of 16, may have raised more than a few eyebrows, it was no fluke. They didn’t let the Netherlands have a single shot on target, and they were rewarded for their strong work ethic. As things stand, the Czech Republic, which reached the final at Euro 96, is at 3/1 to book their place in the semi-finals.

Meanwhile, Denmark has enjoyed a fairytale tournament. Although they experienced adversity at the beginning of Euro 2020 when Christian Eriksen collapsed on the pitch, the 1992 winners have been in fabulous form of late. They became the first team in Euros history to score four goals or more in two matches in a row.

The Round of 16 victory over Wales was a point in the proof. From the very first whistle, the Danes were hungry, and they were unrelenting in the pressure they exerted. Kasper Dolberg and Mikel Damsgaard have been the aces in the pack, and they will need to come to the fore if they are going to win through to the semi-finals. Denmark are currently valued at 21/20 to beat the Czech Republic inside 90 minutes.