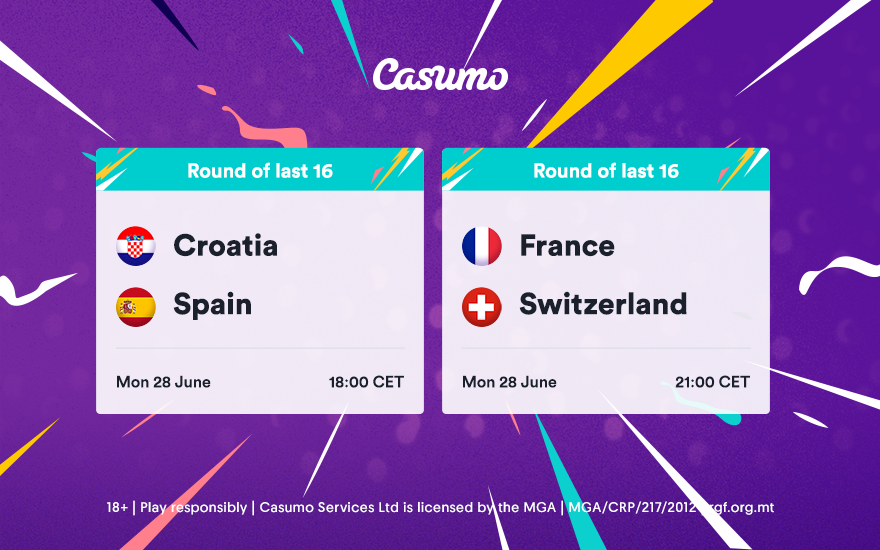 The Round of 16 at Euro 2020 has begun in earnest. On Monday, there are two games to look forward to, as Croatia lock horns with Spain, while Switzerland will pit their wits against France. In this preview, we will see how these sides are shaping up ahead of the knockout stages, as well as refer to the latest match odds. Read on to find out more.

Spain enjoyed a massive stroke of luck to reach the round of 16. Against Slovakia, they benefited from a couple of howlers from Martin Dubravaka. One of the goals conceded by Dubravka was bizarre as he punched the ball into his own net after Pablo Sarabia’s effort looped into the air after hitting the crossbar.

To date, Spain has been rather passive in their play, and they have been accused at times of trying to walk the ball into the net rather than fire crosses into the box. But against Slovakia, it seemed like Spain had found the rhythm. However, Álvaro Morata fired blanks again, as he fluffed his spot-kick. Although Luis Enrique will be relieved that his side is through to the knockout stages, they are desperate to reach the pinnacle of European football once again. Spain is currently 3/5 to beat Croatia.

Meanwhile, Croatia, who had a pensive start to Group D, saved their best for last against Scotland as they ran out 3-1 winners. Luka Modric was written off before that game, but the hallmark of a great player is their ability to silence their detractors. And he did so in emphatic fashion, as he steered a stunning effort with the outside of his right boot into the top corner of the net.

Copenhagen will play centre stage for this game, and Croatia can’t afford to sit back against Spain or else they will be picked off. Zlatko Dalic’s men reached the final of the World Cup three years ago, and they know how to rise to the big occasion, so this will be an intriguing encounter.

Group F was always likely to be laden with danger. But France was undeterred, and they navigated their way through choppy waters. Karim Benzema looked like a player transformed as he netted a double against Portugal to take his tally to 29 goals in 86 appearances for France. His first goal, in particular, was superbly taken, as he latched onto a wonderful through-ball from Paul Pogba before lashing the ball across Rui Patricio into the net.

Things are clicking for France, and while they had a scare against Hungary, Didier Deschamps’ men have great balance. They look irresistible upfront with the likes of Benzema, and Kylian Mbappe, who constantly makes a nuisance of himself. France will be a threat in the latter stages, and against Switzerland, they are a short 11/20 to progress to the quarter-finals.

Switzerland, meanwhile, finished with a flourish as they thrashed Turkey 3-1 in their final Group A game to secure a last 16 berth as one of the four best third-placed teams. While Xherdan Shaqiri’s place in the starting line-up has been questioned, Switzerland made amends for their poor start to the group.

If the Swiss can release the ball early to Breel Embolo during the game, they may have some joy. Embolo has pace and guile, and he could cause France some problems. However, Switzerland is currently 6/1 to beat France and reach the last eight.

Who will win the Golden Boot?

The Golden Boot is being fiercely contested, but who will walk away with the individual accolade? Stay up-to-date with all the latest Euro 2020 golden boot odds.