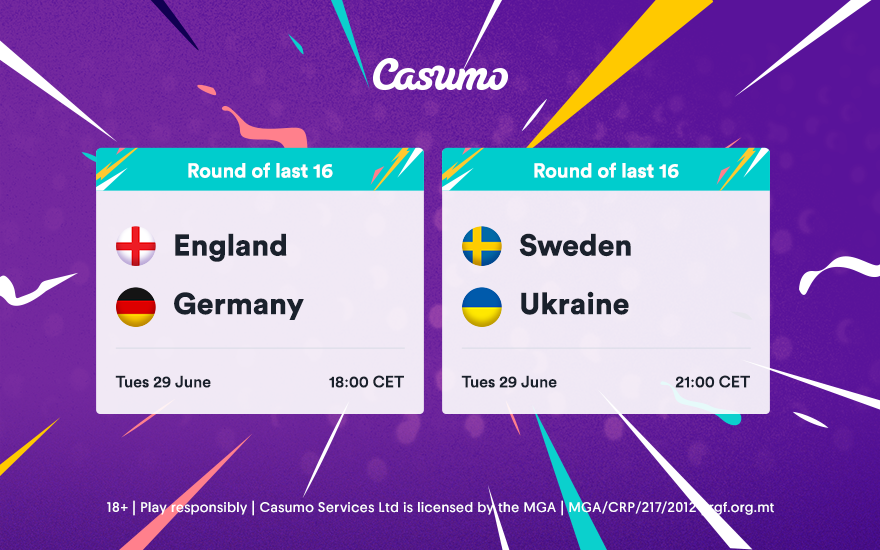 The Round of 16 has a couple of seismic clashes in store, none more so than England v Germany. There is no love lost between these two sides, and we will provide a full preview of that showdown. We will also reveal our thoughts ahead of Sweden v Ukraine, and we will run through the latest match odds.

England has yet to find top gear at Euro 2020. Gareth Southgate has come under scrutiny for his conservative tactics, and Harry Kane has been rather subdued. Nevertheless, the one main positive to take from Group D, was that they racked up three clean sheets. The Three Lions have an abundance of riches in attack, with Jack Grealish staking his claim for a starting berth against Germany. He produced a superlative display against the Czech Republic, and he provided an assist for Raheem Sterling.

There was such a swing in positions on the final Matchday in Group F, that at one point, England could well have been playing any one of France, Germany, Portugal or Hungary. England know all too well the difficulties of facing Germany. All England fans will remember that halcyon summer of 1996 when it was thought ‘football would come home’. However, it ended in tears as England crashed out against the Germans on a penalty shoot-out, and they will be eager to expunge such memories from their mind. England is currently 6/4 to beat Germany.

Of course, Germany are knockout specialists. But they were in real danger of an early elimination against Hungary. They had to come from behind twice before Leon Goretzka pulled them out of a sticky spot six minutes from time. Joachim Low’s men have lifted the European Championship on three occasions, but, against Hungary, they showed their vulnerability.

If they can rekindle their performance against Portugal, where they ran out 4-2 winners, Germany will fancy their chances. Low has some excellent technicians in the middle of the park, including Toni Kroos, who’ll be eager to pull the strings, while Robin Gosens is perhaps the unpolished gem. As things stand, Germany is 2/1 to get past England.

For Sweden, it has been a solid Euro 2020 to date, and while they are happy to fly under the radar, they managed to top Group E ahead of Spain. Their reward is a trip to Hampden Park in Glasgow to face Ukraine. Emil Forsberg has caught the eye, and he is a slippery customer. Against Poland, he grabbed a brace, and he has three goals to his name in total so far this tournament. He will certainly be Sweden’s main danger man.

Five years ago, Sweden exited Euro 2016 at the group stages, so this is a marked improvement. Under Janne Andersson, Sweden has enjoyed a renaissance, and they will be looking to match their best performance at the Euros when they reached the semi-finals in 1992. With players like Kristoffer Olsson, Sweden have guile in midfield, and they will pose a threat to Ukraine. Sweden are currently valued at 27/20 to beat Ukraine, and reach the last eight at Euro 2020.

Ukraine, meanwhile, qualified for the Round of 16 as one of the four best third-placed teams. They will be mindful of the fact they only picked up one win in Group C. Andriy Yarmolenko is Ukraine’s creator-in-chief, but, like Sweden, they were knocked out of the group stages five years ago.

Andriy Shevchenko’s charges were below par in their final group game against Austria, and they will have to be a bit cannier if they are to win through to the quarter-finals.

The race for the Golden Boot is intensifying. Check out the latest Euros golden boot odds to see who will walk away with that individual award.