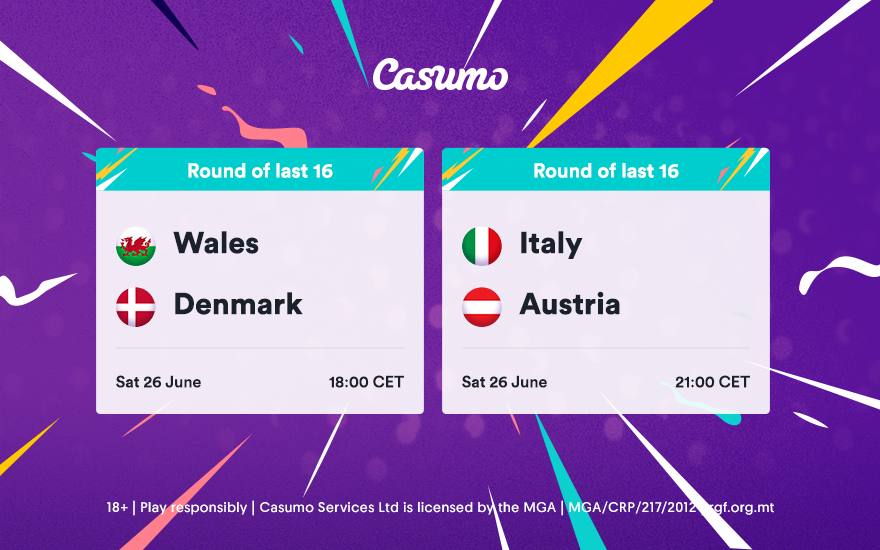 After a frenetic end to the group stage, Euro 2020 shifts its attention to the Round of 16. We have two intriguing clashes to kick things off — Italy v Austria and Wales v Denmark. We will provide the full lowdown on these matches, and check in on the latest match odds. So, read on to find out more.

Italy have been one of the most consistent teams at Euro 2020 so far. A 1-0 victory over Wales stretched their unbeaten record to 30 matches. With that win, the Azzurri breezed through into the Round of 16 with maximum points from their three group games. They also equalled an 82-year record in the process! This dates back to when Vittorio Pozzo was in charge, and he went nearly four years without tasting defeat between October 1935 and July 1939.

Under Roberto Mancini, Italy has produced an exhilarating brand of football, and the team is gelling well together. Manuel Locatelli and Ciro Immobile have given the Azzurri a new lease of life. They have challenged the traditional school of thought that Italy is just a defensively shrewd side. This will be their first trip to Wembley in the competition, and their winning mentality could see them into the quarter-finals. At the time of writing, Italy is a short 1/2 to advance to the last eight.

For Austria, this is relatively uncharted territory as five years ago, they exited the competition at the group stage. They plotted their way to the Round of 16 by accruing six points in Group C, although they were completely outclassed during a 2-0 defeat to the Netherlands on Matchday 2.

They won’t have fond memories of England’s national football stadium though. The last time they graced the hallowed turf of Wembley, they were thrashed 7-0 in an international friendly. Italy will certainly represent a step up for Austria, who are preparing for their first knockout fixture since 1954. When you consider Italy have scored seven unanswered goals during the tournament, this encompasses the scale of the task facing Austria.

Wales have had a laser-like focus throughout this tournament, and nothing seems to faze them. Although they ended their Group A campaign with a 1-0 loss against Italy, Robert Page’s men defended stoutly. This, despite playing more than half an hour of the game with only 10 men after Ethan Ampadu was sent off.

There’s no limit to Wales’ ambition, and the Euro 2016 campaign will act as inspiration. Page is in no doubt that Wales can go deep in the tournament once again. He said: “We want to go as far as we can. We know that on our day we can give anybody a good game.” And with the likes of Gareth Bale and Aaron Ramsey, they have two players who can cut teams down to size. Currently, Wales are trading at a longer 19/4 to cement a quarter-final berth.

Denmark, on the other hand, has endured an emotional rollercoaster following Christian Eriksen’s cardiac arrest during the group game against Finland. Nevertheless, despite the adversity and outpouring of support for Eriksen, Denmark has pulled themselves together, and they look in good shape going into their game against Wales.

A 4-1 win over Russia in their final Group B game ensured their progress, with Andreas Christensen thumping the ball home from long range. Despite the toll taken on the players over Eriksen, there’s still a strong feeling of togetherness in the squad, and they can’t be written off.

The Golden Boot race still has time to run. But if you want to find out how the latest Euro 2020 golden boot odds are shaping up, don’t worry, we have you sorted.