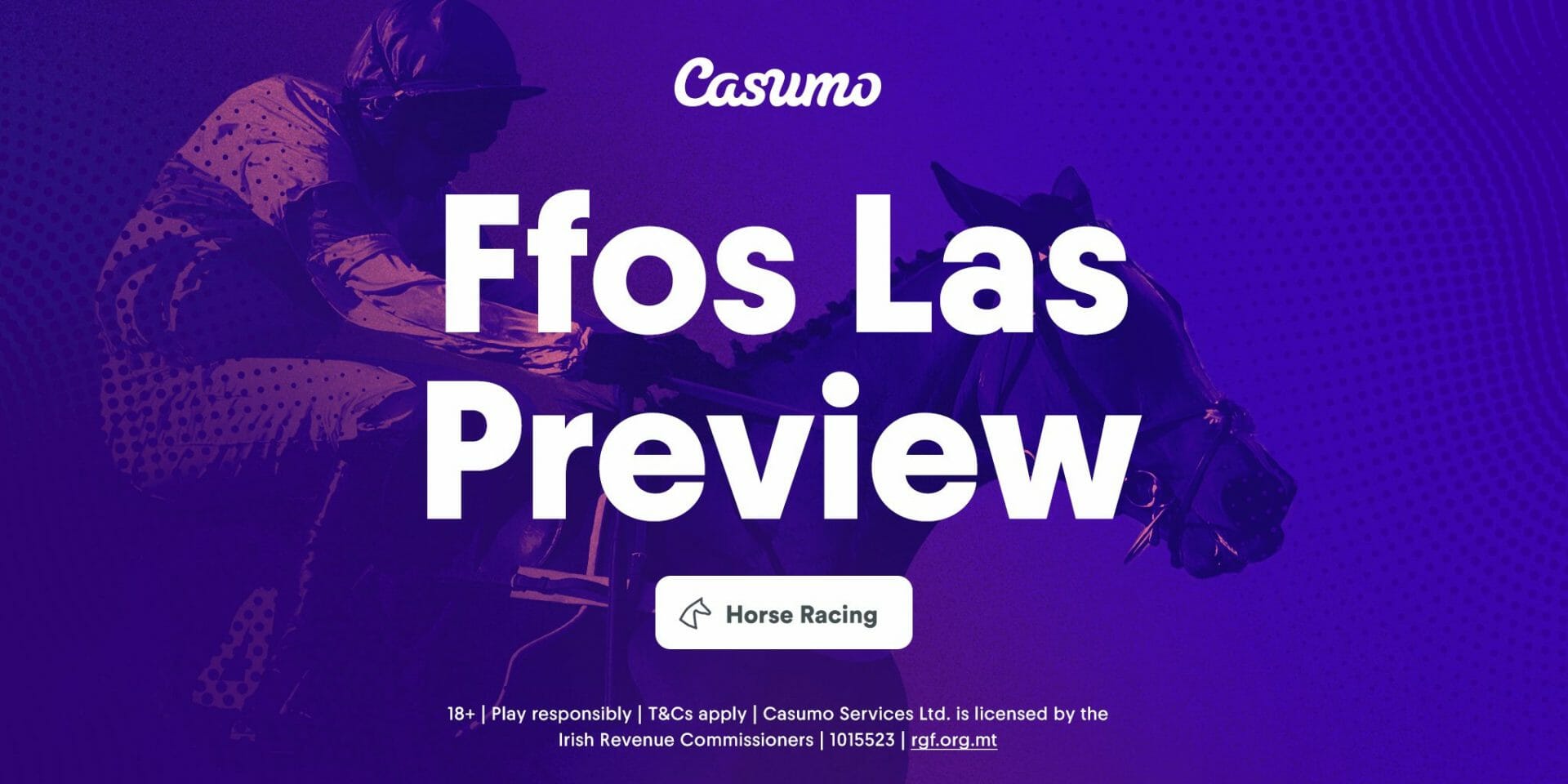 Another cracking horse racing Casumo-sponsored afternoon this Wednesday, as the Sky cameras head to Ffos Las for a 7-race National Hunt jumps card.

There will be plenty of betting opportunities for horse racing fans to get stuck into during the afternoon, so here at CASUMO we take a look at each race and give you our best horse racing betting tips.

CASUMO VERDICT: The Warren Greatrex yard have a decent 21% record with their hurdlers at the track so their Bolsover Bill will be looking to uphold that strike-rate but does have a bit to prove based on recent runs. The only recent winner in the field is Spike Jones, who landed a bumper at Fontwell in good style last month. He’s over hurdles here for the first time and providing he’s schooled well has to be one for the

shortlist. Chantilly Haze and Paschals Dream are others to note in the market, but the two that get the call here are DALAMOI and PORT OR STARBOARD. The former caught the eye for the Tim Vaughan yard last time out when running a fine fifth in a decent bumper at Cheltenham. That was only 3 1/2 weeks ago so will be fitter for it and looks the sort to improve for tackling hurdles for the first time here. The other pick – Port Or Starboard – was second last time out here and that experience over the track and hurdles will be a big plus. The winner that day looks a fair sort, so the form is okay, while he’ll be fine on this soft ground. With the expected improvement from that opening run over the sticks he can get involved.

CASUMO VERDICT: Two more runners here for the Tim Vaughan yard – Bebraveforglory and Wax And Wane – with the last-named looking their better chance after a fair third last time out at Bangor. Local trainer – Evan Williams – has a chance here too with his 5 year-old – Brooksway Fair. He was fifth at Uttoxeter last time out after a break, keeping on well that day to suggest the step up in trip will suit. Trainer Venetia Williams has a good 29% record with her chasers and won this race a few years ago too – any move in the betting for her Sendhervictoria’s should be respected. But it’s hard to ignore the recent win of the Harry Fry-trained Imperial Esprit, who won well at Uttoxeter last month. He’s up 10lbs for that which is a tad harsh, but kept on well and with that being his first run back sine Jan 21, then can be expected to have improved too. The danger can come from SARTENE’S SON. This 8 year-old

got tired last time out at Warwick over 3m2f so the drop in trip here (2m5f) will help, plus he’s switching back from hurdles to chasing on a 3lb lower mark. The icing on the cake is jockey Tom Bellamy, who boasts a cracking 43% record when riding over fences at the track.

CASUMO VERDICT: Trainer Rebecca Curtis loves to target this race – she’s landed the prize three times since 2013 and for the last two years. With that in mind a chance is taken on her BOLEY BOY here. A former pointer that is having his debut run under rules today but has only run the once before and that resulted in an unseat in a Point. He’s very much an unknown, but the good record of the yard in the race is hard to ignore.

Of the rest, Gris Gris Top, Glancing Glory and the Henderson-trained Moonlight Flit have to enter the mix, but it’s interesting that Rebecca Curtis also has another runner in the race – TIME TO FOLLOW.

Therefore, it could pay to have both her runners on side. This 5 year-old was last seen running down the field on debut in a bumper at Bangor a year ago, but connections have clearly taken their time with him and has had a wind op since then too. He was sent off as short as 9/4 for that debut run, so it’s likely connections felt he’d run better than he did.

Plenty with chances here but the main call is the Kim Bailey-trained CHINWAG, who was an unlucky loser at Newton Abbot last month. He was only beaten 4 lengths in at the line but was virtually stopped during

the race by a faller so would have surely have got a lot closer had that not happened. The winner of that race – Arian – is also here too, but you feel with a bit more luck in-running the Bailey runner can reverse that form.

Sean Bowen, who has a 25% record riding over fences here, takes the ride. Bailey also has EQUUS DANCER in the race and with their main jockey – David Bass – picking this one, then we are happy to opt for both stables runners here. This 6 year-old hasn’t been out since March and is also having his debut over fences here, but has gone well fresh in the past and is lightly-raced to suggest there is a lot more to

come. Plenty of others with chances though in a very competitive race – course winners Nada To Prada and Molly Carew – are two of those, while Glory And Honour, Town Parks, Ring The Moon, Le Cameleon and Ouro Branco are sure to all have their supporters as well.

CASUMO VERDICT: With a 29% record at the track with her hurdlers, then the Rebecca Curtis-trained Mr Katango can’t be ruled out, but does need to bounce back from a poor run last time at Bangor. Point Of Principle is a frustrating horse as he’s clearly got ability but now 11 runs without a win and that came back in 2018. Winged Isle is a proven course winner that will be better for a return run at Market Rasen last time out, but the safe call is to stick with the three recent winners in the field – Lossiemouth, Faire Part Sivola and To Be Sure. Of that trio, To Be Sure and Faire Part Sivola were both good winners at the track last time out, but are also up in the weights again here. Faire Part Sivola also has his fair share of weight (12-2), which won’t be easy to carry in conditions. So, the pick is the Tom Lacey runner – LOSSIEMOUTH. This 6 year-old was a nice winner at Ascot last time and a 6lb rise for that looks fair. Claiming jockey – Thomas Doggrell – continues in the saddle and his 7lb claim will be a big help in the likely soft ground.

CASUMO VERDICT: Steel Native and Tudors Treasure are the only two CD winners in the field, which gives them an advantage, while Nessfield Blue is the only last time out winner and is only up 3lbs for that. The eye for punters will be drawn to the Jonjo O’Neill runner – Hang Tough – who was third last time out, but he was beaten 37 lengths that day and is also back from 6 months off. Any moves in the betting for Canada Kid and Spider Cullen should be noted, but the picks here are ISTORIUS and FAIRLAWN FLYER. The former comes from the Venetia Williams yard, who you feel will start to hit form soon – most season’s they have a silly spell that sees them fire in a bundle of winners in a month of so. This 5 year-old have just 10-1 to carry and also has jockey Sean Quinlan booked to take off another 5lbs. He’s also only had seven career runs and just one over fences, so certainly looks the sort to have more in his locker. Fairlawn Flyer stayed on well over 2m4f last time so will like the step back up in trip and is also having his debut over fences here. Sean Bowen gets the ride and he’s got a 26% record riding over chase races at the track.

CASUMO VERDICT: We end with a NH Flat race – a race with many lightly-raced sorts or debutants in. Therefore, the betting will be a good guide, but of those we’ve seen the Jamie Snowden runner – Spitfire Girl – has to be considered after a good second at Fontwell last time month. Time For Hollie was also runner-up last time and that came here at Ffos Las – a repeat of that run should give her every chance too. Trainer Fergal O’Brien often does well in these races too, so any support for his Hidden Beauty should be noted on debut. The same applies to the Curtis, Hobbs and Greatrex teams, who have Cardigan Ilse, Fancy Your Chances and Ilse Of Rona. We are going to take a chance though on two – CALL BLUE and LAST OF AT LEGEND. The former hasn’t seen a track yet but comes from the Nigel Twiston-Davies yard that has a 25% record with their runners in NH Flat races here. Jordan Nailor is booked to ride and also takes off a handy 3lbs. Last Of A Legend, comes from another yard that does well here with their bumper runners – Harry Fry (22%). This one has also had a recent run and that was a solid second at Aintree in a nice-looking mares race. She beat 16 others that day to suggest she’s got plenty of ability and the Fry yard also have history in this race – winning it back in 2019.