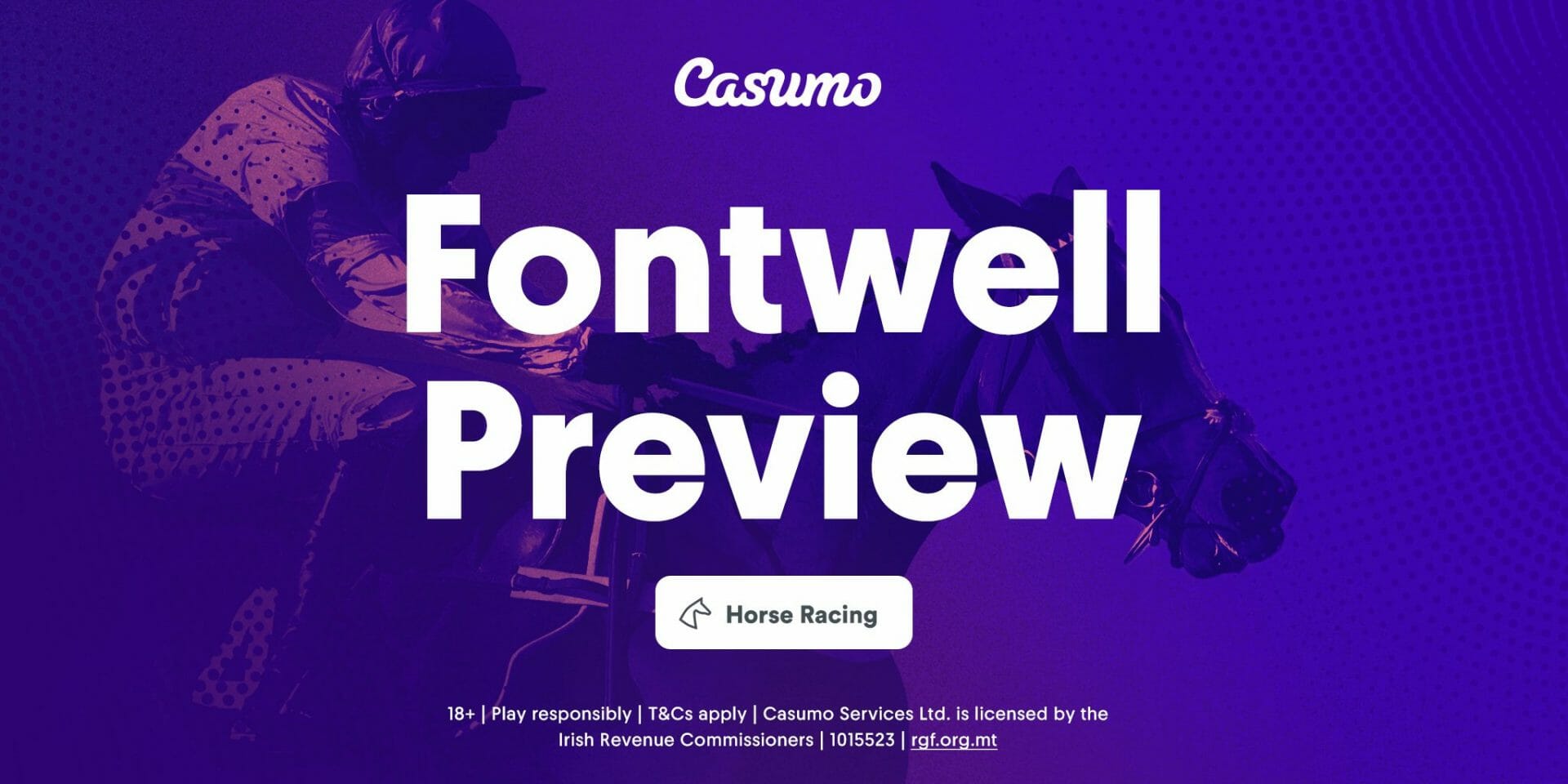 Another Casumo-sponsored afternoon this Friday as the Sky cameras head to FONTWELL PARK for a 6-race National Hunt jumps card.

Plenty of unexposed sorts on show here, including the Harry Fry-trained Gold In Doha, who makes his hurdles debut here after a fair run in a NH Flat race back in February. The Chris Gordon yard often do well here at the track so their pair – Mick Leo and Sami Bear – should be noted in the betting. Robert Walford also runs two – Hipop Des Ongrais and Hititi – with the last-named looking their better chance. Bari Breeze is one of the more experienced in the field and should go well, but the Milton Harris stable are just 1-from-23 with their hurdlers here – they also run Checkitsme. But a yard with a decent strike-rate at the course is Anthony Honeyball, who has a 38% record with their hurdles at the moment – they run WORLD OF DREAMS. This 5 year-old has won two of his three starts too and wasn’t disgraced last time when fifth in the Grade Two Aintree Bumper. He makes his hurdles debut here today, but is also a course winner at the track and returns from a wind op over the summer too. The danger can come from the Alan King runner – War Chief – who is back from a long break. A former 80-rated flat runner, he’s clearly had his issues, but the fact connections have stuck with him suggests he’s got more to give, and the King camp also have a fair record here with their hurdlers (31%).

Just the three runners here, but a tight little contest. The bottom weight – Nikap – was a nice winner at Ffos Las last month and seemed to win with a bit up her sleeve. She’s up 7lbs for that and gets in with just 10-9 to carry, but is also up in grade here so you feel she’d have to find a bit more overall. Will Victory is the only one of the trio that returns from a break, so fitness has to be taken on trust. She runs for the first time for the Dr Richard Newland yard (formerly with Charlie Mann). She’s won twice (from 7) over hurdles, but is also having her debut over fences here, so jumping is an unknown. So, a chance is taken on the Jamie Snowden runner – ANYTHINGFORLOVE – to bounce back to form. Yes, she was disappointing at Warwick on her chasing debut last month – however, she lost a shoe that day so that didn’t help. She’ll need to brush up on her jumping but was a useful hurdler last season – winning a Grade Two at Sandown last February. With that last run also being her first for just over 7 months we can expect her to have improved for it as well.

Any market support for the Dan Skelton runner – Floki – should be noted. This 7 year-old is back from a long time off (863 days), but showed ability a few seasons ago and still has time on his side. The in-form Gary Moore camp have two in the race – Ruby Yeats and Manucci. The former is helped with jockey Ellie Vaughan able to claim 10lbs, but with Jamie Moore riding – MANUCCI – he looks their main hope. This fair handicap stayer on the flat is back over hurdles here but will be fitter than more after three runs on the level recently. He was a close 6th at Goodwood last time out so should be spot on for this and is also a course winner over hurdles here at Fontwell. EARTH BUSINESS will be better for a recent fourth at Chepstow in a decent novice hurdle and can go well too and rates the main danger, while the Oliver Sherwood yard won this race in 2019 and try again – this time with a horse called Walk In The Wild. Of the rest, the Jamie Snowden entry – Alrightjack – is certainly no back number either and is a course winner too, but is just 1-from-11 over hurdles so has become a bit frustrating.

Just the six runners here and it’s a race that they all have a bit to prove. Cilaos Glace is the only proven course winner in the field but his last three runs has been beaten 26, 27 and 43 lengths so needs to bounce back. Shut The Box was a nice winner at Newbury two runs back, but flopped at Kempton last time out and the jockey reported that he was reluctant to race, which is not ideal. Doukarov and Storm Rising are others with questions to answer, so the call here is to side with ON THE WILD SIDE and DAME DU SOIR. The former was going well last time out at Hexham when unseating his jockey four out. Yes, he’ll need to brush up his jumping but Sam Twiston-Davies, who has a 32% record over fences at this track, takes over in the saddle. The other pick hails form the David Bridgewater yard that has a 26% record over fences here. This 8 year-old has had a wind op since her last run in March and should be much more at home now over this shorter trip after not staying 3m+ last time out.

Course winner, Good News, has been pulled up and fallen in his last wo races so confidence must be low, while Good Man Vinnie is another that falls into that category after pulling up here last month. THE TIN MINER has run well here in the past and likes to front run so can back a bold bid from the front and is certainly one to have on your side. Any Nicky Henderson runner has to be respected but you feel their Lelantos isn’t one of their stable stars and is currently 0-from-8 in his races. So, the other safe call in the race is to stick with the only recent winner in the field – IMPHAL. This 7 year-old comes from the in-form Gary Moore yard, who are flying in winners most days at the moment, and caught the eye when running on well to get his head in front at Ludlow last time out. He’s a horse that often needs a lot of encouragement from the saddle, but will have no better partner on that score than Jamie Moore – he’s up just a pound from that last run and the longer trip here should also help.

CASUMO VERDICT: Course winners – Between The Waters and Mogestic – have this as a plus, but despite having a lot of weight it’s hard to get away from the Seamus Mullins runner here – TOMMIE BEAU. This improving 6 year-old has won his last four races and returned from 5 months off last month to pick up where he left off with a nice success at Fakenham. He’s up another 7lbs here and has a massive weight to deal with (12-10). But he’s shown in the past he’s capable of carrying a big burden to win and the useful Kevin Jones is able to take off 3lbs to help. Churchtown Glen, First Assembly and Irish Sovereign certainly have claims on their best form too, but the danger can come from HOOT AT MIDNIGHT. Okay, this Charlie Longsdon runner is yet to win a race (18 runs) but has hit the post several times and once again gets in with a low weight of just 10-5. Jockey Charlie Deutsch has a 38% record over fences here at the track and the fact he was sent of favourite the last twice suggests connections feel he’s going to have his big day sooner rather than later.