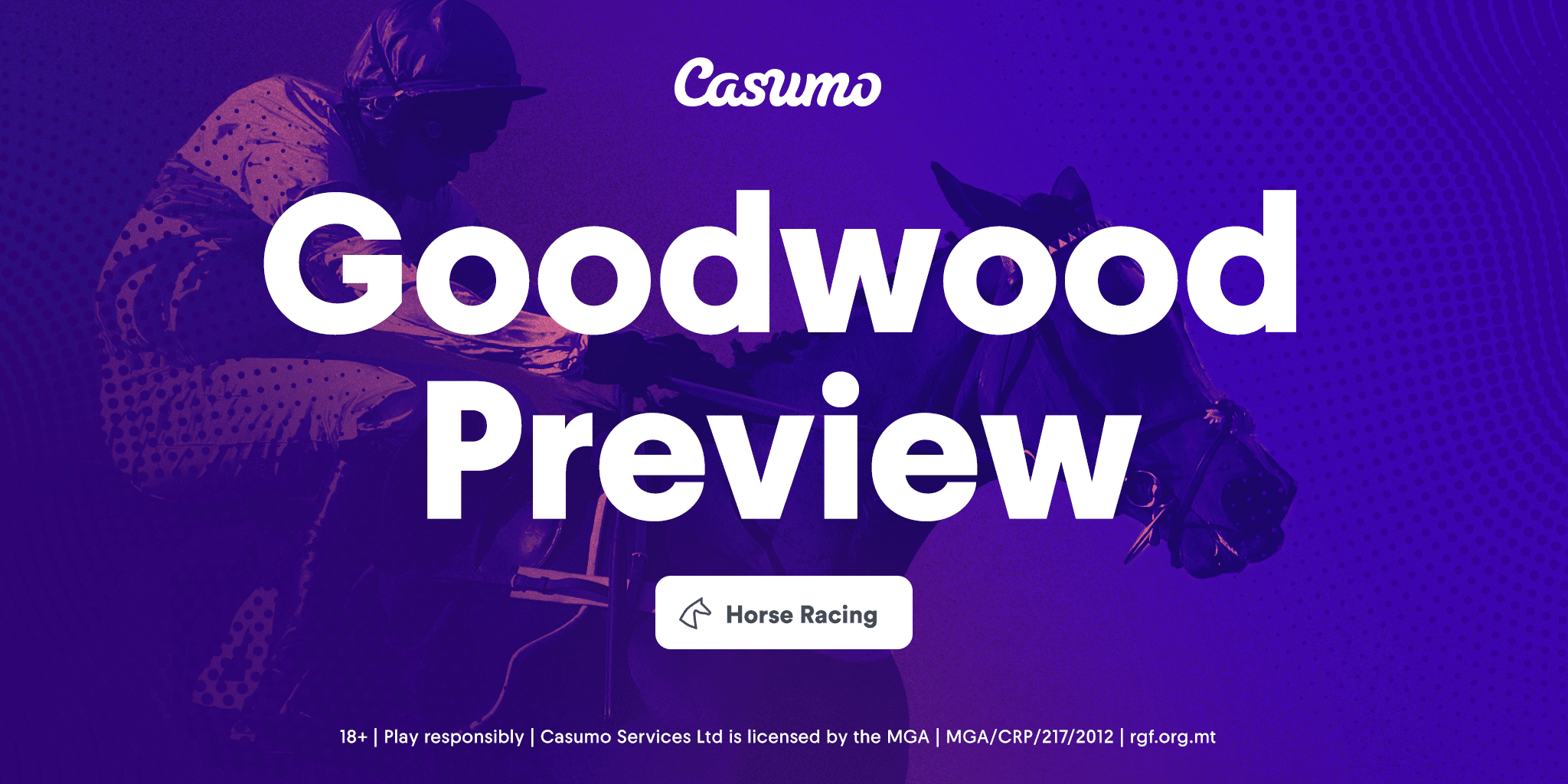 Here at Casumo, we’ll be on-hand each day throughout the meeting – giving you the key trends and our free tips for the LIVE ITV races.

We get going on Day One with five LIVE ITV races, including the Vintage Stakes and Lennox Stakes, plus the Group One Goodwood Cup – a race the popular Stradivarius will be looking to win for an incredible fifth time!

CASUMO VERDICT: A tricky 18-runner handicap to get things going but with 18 of the last 19 winners aged 4 or 5 this will at least knock out some of the 6 year-olds – Caradoc, Cockalorum, Johnny Drama, Victory Chime, Breath Caught, Bugle Major, Data Protection and Plantadream. Those drawn in double-figures have done well in recent years too – winning 10 of the last 15, while 15 of the last 19 winners carried 8-11 or more in weight – if this weight stat is to be continued then horses 14-18 (included) would have this to defy. It’s also a Goodwood race that the powerful Mark Johnston yard have targeted with a lot of success over the years so their entries Maydanny, Dream With Me and Sky Defender must all be considered. Of that trio, the Shadwell-owned MAYDANNY (e/w), who won this race 12 months ago, looks their main chance, with Jim Crowley riding. Okay he’s rated 12lbs higher than last year but won that day by an easy 5 lengths and despite not winning a race since has run some solid races in defeat. This 5 year-old also ticks most of the main trends and is also a proven CD winner here at the track. He was last seen running a solid second at Sandown at the start of July (1m), but stays this extra 2f trip well too – draw 5 might be the only slight negative, but is still taken to go well. Of the rest, Migration returned to the track last time after a break to run well at Salisbury and with the expected improvement looks a big player too, but with that last run coming off a 600+ day break you fear about the dreaded ‘bounce-factor’. Bell Rock, Victory Chime and Lucander are others to note, but of those at slightly bigger prices HARROVIAN (e/w) and the already mentioned DREAM WITH ME (e/w) are worth a play too. The first-named is from the John Gosden yard and will have Frankie Dettori riding. Yes, he was 7th behind Victory Chime last time out at Epsom, but that came off a 255-day break and should be better for it. The cheekpieces are on today to sharpen him up and he’s handled this track well twice in the past. Dream With Me comes from the Mark Johnston yard that won this race 12 months ago. He won well tree runs back at Ayr, but has found the ground a bit on the soft side the last twice, plus gets in here with a feather weight of just 8-4 to carry, which will make him very dangerous.

CASUMO VERDICT: With the Aidan O’Brien yard having won three of the last 7 runnings, their The Acropolis has to enter the fray. But you feel that this Ballydoyle runner isn’t one of their real superstars in the making after two G2 defeats in recent runs. One of those came in the G2 Coventry Stakes at Royal Ascot and the winner of that – BERKSHIRE SHADOW – is back for more here too. This Andrew Balding runner is 2-from-2 after winning a maiden at Newbury the time before his Ascot win, but was impressive in beating another runner here – Eldrickjones – last time to suggest he can uphold that form despite having to give 3lbs away this time. Oisin Murphy rides and his running style suggests this step up to 7f will be fine. Angel Bleu might attract interest with Frankie riding, while Austrian Theory and Secret Strength look to have a bit to find, so the main danger can come from the Richard Hannon runner – Lusail. This juvenile is the top-rated in the field (by a pound) and also has to give 3lbs away to all barring Berkshire Shadow due to his G2 July Stakes win earlier this month. He only just scrambled home that day by a head so even though he’s won over 7f in the past that wasn’t in a class of race like this. He can run a big race, but I’ll stick my neck out on the Balding runner – Berkshire Shadow – remaining unbeaten.

CASUMO VERDICT: 12 months ago we saw the Godolphin runner – SPACE BLUES – win this race well and it can be more of the same this year. He beat another runner here – Duke Of Hazzard – by 2 lengths that day and heads here having won 8 of his 15 starts. Yes, he needs to bounce back from a poor run as beaten favourite at Meydan in the G1 Al Quoz Sprint, but the return to Goodwood and back to 7f (that last race was over 6f) will help. He’s the clear top-rated in the field at 120 too. The only slight negative is possibly the high draw (12), but he’s the class act in the race and can defy that. But with 10 of the last 12 winners coming from draws 7 or lower, then it could pay to have another onside too. Those drawn low are Fundamental, Creative Force, Safe Voyage, Prince Eiji, Happy Power, Pogo and Real Appeal. Of that bunch another Godolphin runner – Creative Force – looks a big player too. Recent winner Kinross, who scored well at Haydock in the G3 John Of Gaunt Stakes, can go well too and expect a bold show up with the pace from Safe Voyage, who also won well last time. But the other pick is another CD winner in the line-up – HAPPY POWER (e/w). This Andrew Balding runner is also ridden by Ryan Moore and on the form on his fourth in Diamond Jubilee Stakes at Royal Ascot would have a big say. He ran too free over 1m last time at Ascot, but back in trip here to 7f will help and has also handled a bit of cut should more rain come.

CASUMO KEY TREND: The John Gosden-trained Stradivarius has won this race for the last four years

CASUMO VERDICT: He’s not quite the invincible force he one was, but I’ll take the four-time winner of this race – STRADIVARIUS – to get back to winning ways. This John Gosden runner is still only a 7 year-old and having got a bit stuck in a pocket last time at Ascot in the Gold Cup (4th), can hopefully make amends here. His record at Goodwood reads 1-1-1-1, plus he won’t mind any give in the ground if the track gets more rain in the build-up to the race. He’s still the top-rated in the field (121) and even though he faces some tough challengers again, he’s taken to make it win number five in this race. Nayef Road was runner-up in the race 12 months ago, but seems to have lost his way this season and his last three runs have been poor – he’s a big price though if able to bounce back. The 2020 third – Santiago – is also back for more and should run his race again – he’s one of three for trainer Aidan O’Brien, with Serpentine and Amhran Na Bhfiann his other two. The main players against Strady though look to be Trueshan, Spanish Mission and Sir Ron Priestley. Trueshan wasn’t disgraced carrying a big weight in the Northumberland Plate (6th) last time and back off level weights is dangerous – he stays this trip well, but it is his first run at the track so that would be an unknown. Spanish Mission was third in the Ascot Gold Cup – one place ahead of Strady – but was also only 6th in this race 12 months ago and his overall record at the track is 2-3-6, so has a bit to prove at the course. So, that leaves us with SIR RON PRIESTLEY (e/w). This Mark Johnston runner bounced back to winning ways last time at HQ in the Prince Of Wales’s Tattersalls Stakes (1m4f) and looks well worth a crack over 2m for the first time. The other plus is that he’s won twice (3 runs) here at the track, so no issues on that score and doesn’t have a lot to find on the official ratings – just 3lbs with Stradivarius.

CASUMO KEY TREND: 5 of the last 6 winners were aged 4 or 5 years-old

CASUMO VERDICT: Just the six past runnings to go on, but with 5 of the last 6 winners drawn in stalls 9 or lower then this is a trend that is starting to build up. Those with a plus here are Glory Fighter, Recon Mission, Lord Riddiford, Zargun, Ishvara, Only Spoofing, El Astronaute, Rewaayat and Pettochside. With 5 of the last 6 winners also aged 4 or 5 years-old then this is another stat to have onside – of the 17 runners, King Of Stars, Desert Safari, Recon Mission, Sunday Sovereign, Glory Fighter and Ishvara tick the box. We’ve also got last year’s winner in the race – Only Spoofing, who is well-drawn in 4, but is also rated 6lbs higher this time and only won by a neck last time. The 12 year-old Pettochside loves it here at Goodwood and if the ground got any softer this would help his chance too. He’s still loving his racing despite his advancing years – this will be his 109th run. The useful Mollie Phillips rides and takes off a handy 7lbs and he’d be a popular winner. Expect Ornate to blast out as he only knows one way of running – however, has been out of form of late so would need to bounce back. Rewaayat has been popular in the betting but was actually beaten 2 lengths by Pettochside last time at Ascot and having the tendency to race a bit free in his races, this would be a worry if the ground got any softer. The two I like, therefore, are the 2017 winner of the race – EL ASTRONAUTE (e/w) and the Mick Appleby-trained KING OF THE STARS. The former is slowly dropping back down the ratings and is starting to look dangerous again off a mark of 103 – had been as high as 111 a few years ago. Softer ground is fine and he should find this drop back into handicap company easier after running in Listed races the last twice. King Of The Stars is a fast-improving sprinter that has been placed in the top four in all his last six races. He returned from a 3 month break las time to run a close second at Newmarket and even though up 5lbs for that, he’s in a better class of race here so only has 8-10 to carry. He’s also handled softer ground in the past well when trained in Ireland, while James Doyle booked to ride is the icing on the cake.