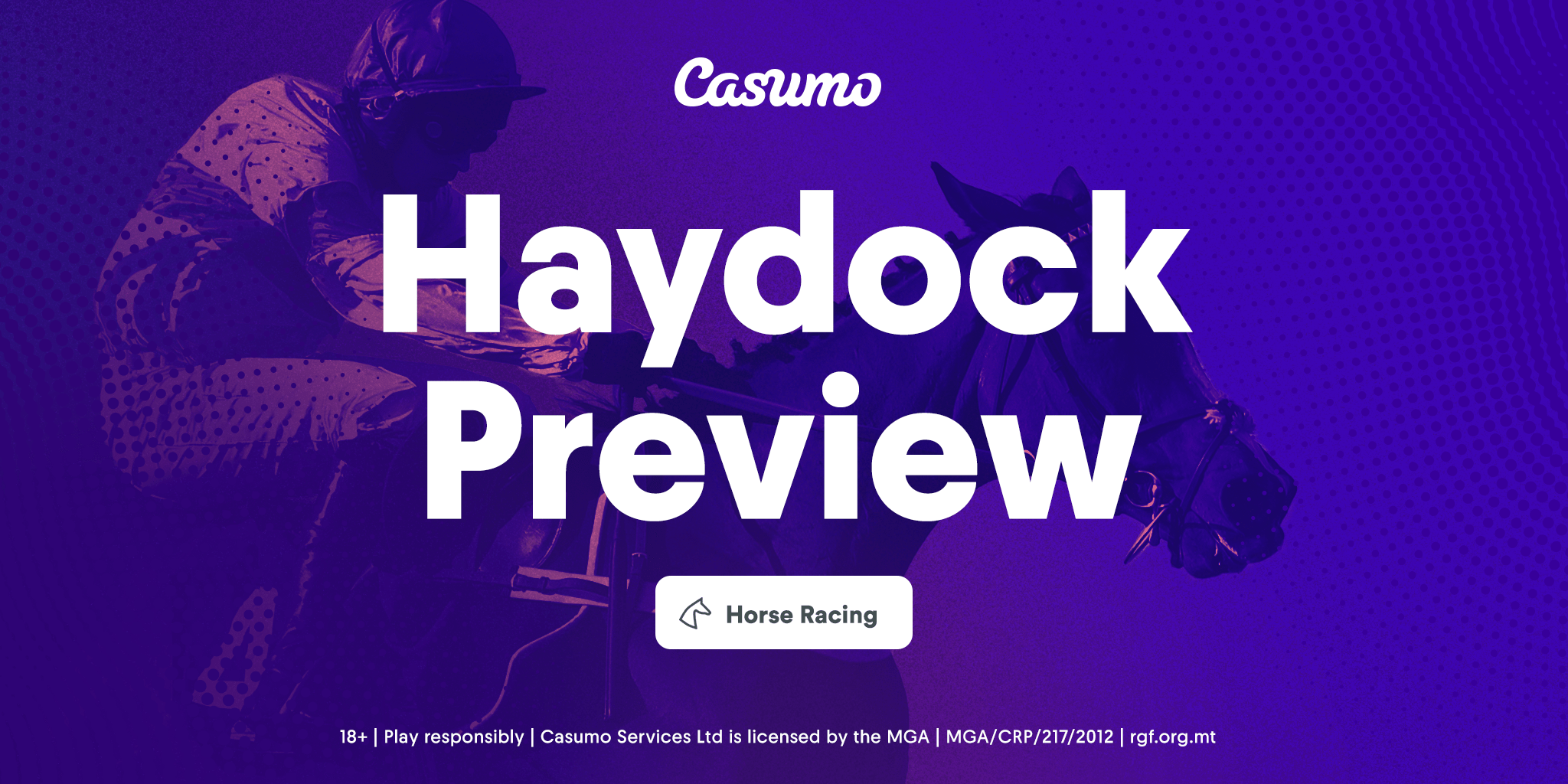 Another Casumo-sponsored evening this Saturday as the RacingTV cameras head to Haydock Park for a decent flat card.

We run through ALL six of our sponsored races with key trainer/jockey stats, in-depth race preview and our main trend.

CASUMO VERDICT: Lady Excalibur and Graces Quest are the two unraced runners in the field so the market should be their best guide. Lady Argento, Maiden’s Tower and Nadein all ran well last time out and can be expected to improve for that experience, but this contest looks to revolve around the William Haggas-trained Constanta and MAYTAL, from the Sir Michael Stoute camp. The former is going the right way after two fair runs at Newmarket and here at Haydock, when fourth last time out. That track experience is a plus and with the Haggas yard having a decent 28% record with their 3 year-olds at the course she’s respected. That said, MAYTAL just edges it on what we’ve seen on the track despite not winning yet. She’s hit the frame in all three starts, including the last twice over 1m2f and the yard also have a fair 24% record with their 3 year-olds at the course. However, the step up in trip looks a good move for this well-bred Sea The Stars filly and that can hopefully see her get off the mark.

KEY CASUMO TREND: Trainer Sir Michael Stoute has a 24% record with his 3 year-olds at the track

CASUMO VERDICT: Fox Hill won well a few starts ago at Redcar but failed to build on that here last time off a 3lb higher mark. She’s also up a further 2lbs here so has a bit to answer. In fact, Second Collection, Not On Your Nellie and Amor De Mi Vida all have similar profiles coming into the race too. They also all won two runs back and couldn’t add to those wins last time out. Therefore, this could be left to two horses that seem to be running into form – LIBERTY BAY and SPUROFTHEMOMENT. The first-named was a close second at Goodwood last time out and gets in here just 2lbs higher. She showed plenty of pace that day over 6f, so the drop back to 5f is a plus, while in this slightly better race she manages to get in with only 8st 13lbs to carry – that’s 8lbs less than last time. Then Spurofthemoment hails from the Charles Hills yard that boasts a decent 23% record with their 4+ year-olds at the track. This 4 year-old led for much of the was in a similar race at Lingfield over 6f last time so is another that should benefit for the drop back to 5f. Jack Mitchell, who has won on the horse before too, rides and has a 40% record on 4+ year-olds at the track.

KEY CASUMO TREND: Trainer Charles Hills has a 23% record with his 4+ year-olds at the track

CASUMO VERDICT: Just the five runners heading to post here for this 2 year-old contest. Baikal and Carbonado are the two unraced unknowns in the race – any moves in the market for this pair should be noted. Papa Cocktail pleased on debut with a fair third at Yarmouth to a fair looking sort – New Science, who is running in the Chesham Stakes at Royal Ascot today. Therefore, a good run from that horse at Ascot will increase the chances of this Tom Clover-trained juvenile. Red Power built on his debut fourth at York to win at Ayr earlier this month, but he only just got home that day over 6f, so this step up to 7f is a slight worry. Therefore, that leaves us with AL SHIBLI, who caught the eye in winning at Chester last time. That also came over 6f, but he had plenty in the locker that day to suggest this step up to 7f is within range, while his breeding also gives a strong indication the extra yardage will be fine.

CASUMO VERDICT: With ALL of the last seven winners of this race coming from stalls seven or lower, Elvirka (8), Realist (9) and Baby Alya (10) have this as a potential negative. That said, this is a race the Kevin Ryan yard like to target – winning it in 2012 and 2014 – so, of that trio, their BABY ALYA might still be worth having an interest in. She ran well on handicap debut at Newmarket last time out (4th of 12) and that also came after not getting a clear run several times during the race. With a bit more luck in-running she can go well. Indian Breeze and Cotai Bear return from fair layoffs so may just need the run. The Bell (33%), Haggas (28%), Palmer (27%) and Crisford (21%) yards all have good strike-rates at the track with their 3 year-olds this is a plus for Realist, Elvirika, Surprise Picture and MAKASHI. Of that bunch, the last-named is the least exposed with just three career runs and took a big step forward last time when second at Doncaster. He’s also into a handicap here for the first time on what looks a fair opening mark of 78 – draw 4 is fine and Jack Mitchell takes over in the saddle having been apprentice ridden the last twice too.

KEY CASUMO TREND: ALL of the last 9 winners came from stalls 7 or lower

CASUMO VERDICT: Just the six runners here, but with horses from stall one having a decent record in recent years, the David O’Meara-trained STAR SHIELD gets the call. This 6 year-old is also the only proven course and distance winner in the field and looks to be running into form after an improved second at Leicester at the end of last month. He’s off the same mark here, but connections also put up the useful apprentice Sean Kirrane this time to claim a handy 5lbs. Of the rest, Streak Lightning has been below-par this season and is still 2lbs higher than his last win, while Fox Power is now 15 races without a win, but on a plus is starting to look very well handicapped off a mark of 81 and having been as high as 100 only last year. Ahdab was seventh in the same race Star Shield was second in last time, so has a bit to prove – therefore, the main danger can come from the consistent Rains Of Castamere. This Mick Channon runner has won three of his last six starts and was a nose second at Bath last time out. Another solid run looks on the cards, but he does continue to creep up the handicap and is now 8lbs higher than his last success.

KEY CASUMO TREND: The horse from stall 1 has won three of the last 8 runnings

CASUMO VERDICT: 13 runners head to post for the final race, but with five of the last seven winners coming from stalls 5 or lower, this is a good place to start. With that in mind, John Jasper (1), Viceregent (2), Capaldi (3), Our New Buddy (4) and COTE D’AZUR have this as a plus. The last-named also heads here in great form having won over course and distance last week. He’s up just 3lbs for that success and despite having a big weight (10st 3lbs) he’s carried this sort of burden to victory in the past and looks a big player again here. Mr Coco Bean is the only other proven course and distance winner in the field so must be respected on that. Billy Roberts and Richard R H B are consistent sorts that can go well too and the unexposed pair of Tamyeez and Our New Buddy could easily leave recent runs behind them coming from big yards. The final one to note though is the Tom Dascombe-trained – MIRAMICHI (e/w) – as the yard have won two of the last four renewals of this contest. Yes, this 3 year-old has not been firing of late, but the softer ground last time might be an excuse and this is also a slight drop in grade. He’s also dropped 4lbs from that last run and gets a fair amount of weight from the bulk of the others.