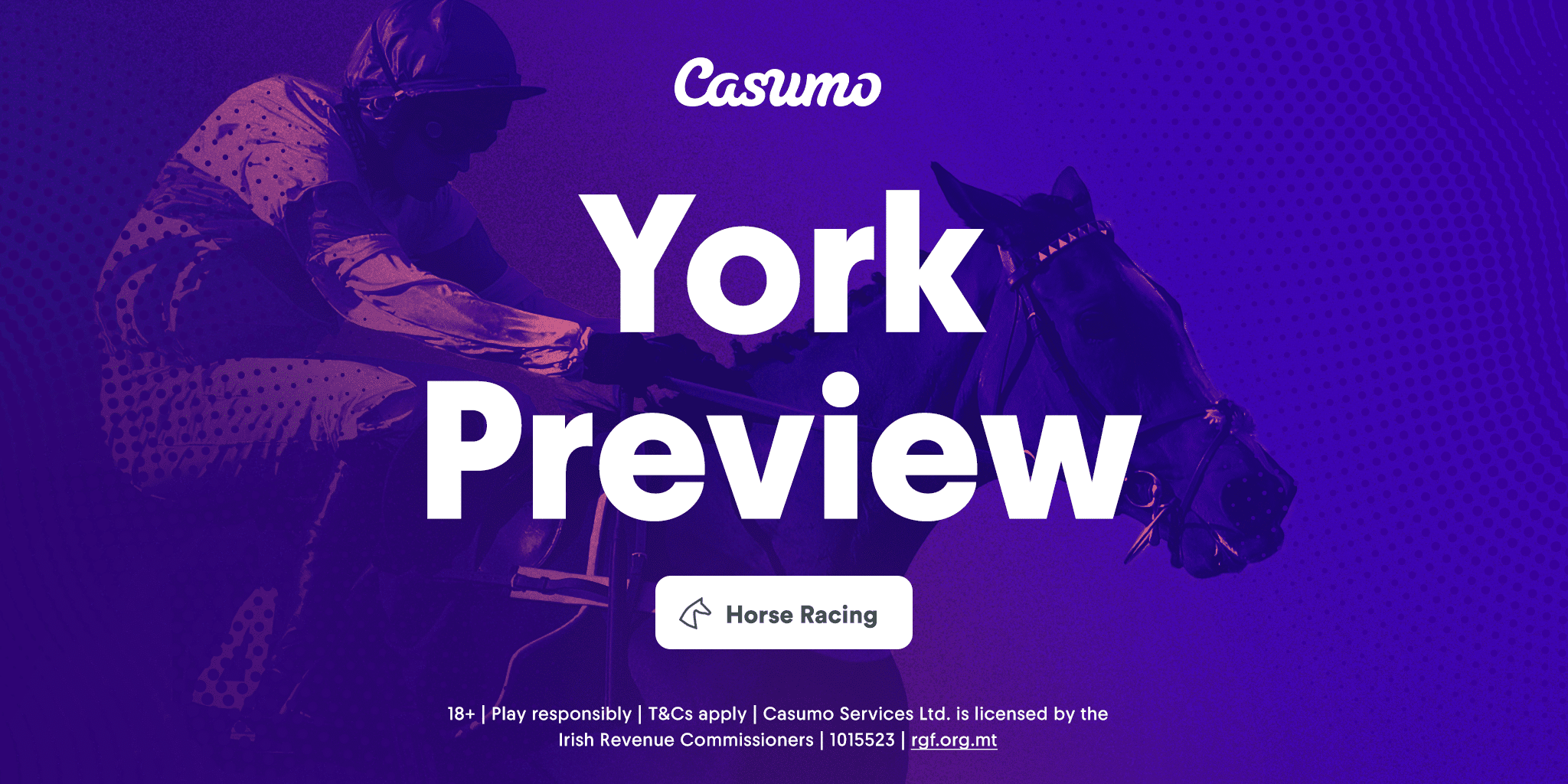 The horse racing action steps up a few gears again on Wednesday 18th August as the four-day Ebor Festival from York gets going. Bundles to look forward to with 10 Group races spread over the meeting that include the Juddmonte Stakes, Nunthorpe Stakes and the Yorkshire Oaks, while the meeting is always concluded with the Ebor Handicap on the final day – the most valuable flat handicap in Europe!

We get going on Day One with four LIVE ITV races, including the Group Three Acomb Stakes, where 15 of the last 17 winners won last time out, while we’ve also the Great Voltigeur – a decent St Leger Trial – but the opening day’s feature is the Group One Juddmonte International Stakes – a race that is worth just over £540k to the winner!

As always, here at CASUMO, we’ll be on-hand throughout the whole meeting to take you through the key trends for each day’s LIVE ITV races – use these stats to find the best profiles of past winners.

CASUMO KEY TREND: All of the last 12 winners carried 8-12 or more

CASUMO VERDICT: An ultra-competitive sprint handicap to start on day one, with 22 runners entered. With ALL of the last 12 winners having carried 8-12 or more though this will help potentially rule out the bottom five on the card – Ornate, Mondammej, Soul Seeker, First Company and Indian Sounds. We’ve also got the 2018 winner of the race – El Astronaute – back for more and, surprisingly, he’s actually the only past CD winner in the field. We do have course winners in the field though – Copper Knight, Live In The Moment, Pendleton, Lahore and Major Jumbo – it’s one of that bunch – LIVE IN THE MOMENT (e/w) – that is the first pick. This Adam West runner is actually 2-from-2 here at York after two nice wins here last summer and returned to the track after around 10 months off a few weeks ago when third at Chelmsford. He can be expected to have improved for that run, while the experienced Rab Havlin, who knows the horse well, is reunited with this improving 4 year-old. He’s drawn 13 too, so that will give him options being pretty much in the middle of the pack. Whenthedealisdone was a nice winner at Goodwood last time and with only 8 career runs should have more to come – he’s up 6lbs from that last win, but can go well. Mountain Peak is another recent winner (Ascot) and should go well from draw 22 despite being 4lbs higher this time. May Sonic is another to note, having won well at Chelmsford last time, while Desert Safari has the form to go close too. The final two picks though are TWILIGHT CALLS and MAJOR JUMBO (e/w). The former was 3l fourth to Whenthedealisdone last time at Goodwood but is 6lbs better off here. The better ground will help him this time too and he’s another unexposed sort that can have more to come with just seven career runs. Major Jumbo completes the picks. From the Kevin Ryan yard that have a fair record in this race. Yes, this 7 year-old has not been firing of late but the drop back to 5f (from 6f) looks interesting. He’s been leading up well in his races over 6f so still shows plenty of pace for a 7 year-old, but has been not lasting out. He’s down another 2lbs here, while even though his last win was in 2019, that came off a 14lb lower mark, so his dropping rating is making him look well-handicapped.

CASUMO KEY TREND: The Charlie Appleby yard have a 38% record with their 2 year-olds at the track

CASUMO VERDICT: A tight little renewal of this Group 3, with all five runners having won last time out. With a 21% record with his 2 year-olds at the track, the Mark Johnston team are respected – they run Royal Patronage. This juvenile got off the mark at Epsom last time by 5 lengths, but this is a big jump up in class. Another yard that do well here with their 2 year-olds is Charlie Appleby (38%), so their NOBLE TRUTH is the call. He actually beat another runner here – Ehraz – who has since franked the form to win easily at Ascot. There were 2 lengths between the pair at Newmarket in July and this Godolphin runner is clearly held in high regard with some fancy G1/G2 entries later in the season – he’s taken to continue his winning run. Of the rest, Dubai Legend was an easy winner at Doncaster last month so clearly has ability, but he’s another that’s taking a big hike up the grades. The danger, therefore, can come from IMPERIAL FIGHTER, from the Andrew Balding yard. This 2 year-old caught the eye when winning on debut at Goodwood (2 ½ lengths) and Oisin Murphy, who rode that day, remains in the saddle. He’s also another with some fancy entries in the future.

Note: The 2008 renewal was run at Goodwood

CASUMO KEY TREND: 8 of the last 19 favourites have won.

CASUMO VERDICT: A useful St Leger trial race over the years so it’s no shock to see the powerful Aidan O’Brien yard well represented again – they’ve three of the 8 runners – Sir Lucan, High Definition and The Mediterranean. Of the trio, HIGH DEFINITION, has threated to be top class after a close third in the Dante Stakes here over 1m2f – running on well to suggest the step up in trip would suit. But he flopped last time in the Irish Derby over further when a beaten favourite. That run was clearly too bad to be true and having been hampered early in the race he did have a small excuse. The return to York will be a plus though and he’s still the top-rated in the field and the form of his Dante third to the classy Hurricane Lane has been franked since. Sir Lucan was a close second on the Gordon Sakes at Goodwood last time and has to be in the mix based on that, plus the cheekpieces are on for the first time here too. The Irish raiders will have strong challengers though from the ‘boys in blue’ of Godolphin with Kemari, who was last seen winning the Queen’s Vase at Royal Ascot in June over 1m6f. He clearly stays further than this 1m4f trip, but being a proven G2 winner already does have to give 3lbs away to the rest which won’t be easy. Youth Spirit, Yibir and THIRD REALM (e/w) are all closely-matched too having run 4th, 6th and 3rd in the already mentioned Gordon Stakes last time. They’ve got a bit of ground to make up with Sir Lucan on that running, but Third Realm was slightly hampered that day (carried right) – without that you feel this Roger Varian runner would have got a lot closer.

Note: The 2008 renewal was run at Newmarket

CASUMO VERDICT: A bit of a mini re-run of the King George Stakes, barring the winner that day – Adayar – not running. We’ve got the second and third – Mishriff and Love – back for more though. The former was second that day and 1 ¾ lengths ahead of LOVE, but I feel the drop back to 1m2f and the return to York can see the O’Brien runner reverse that form. She was also slightly hampered the last day and also gets a handy 3lbs Mishriff. The Gosden runner – Mishriff is clearly a talented horse and is the top-rated in the field, but my niggle is that his last three runs in this country have all been defeats and with 9-6 to carry also has to give weight away to all bar Juan Elcano. The Haggas runner – Mohaafeth – is a player too, but need to bounce back from losing in the York Stakes here last time. Prior to that was a nice winner of the Hampton Court Stakes at Royal Ascot though and being a 3 year-old gets a handy weight allowance off Love and Mishriff. ALCOHOL FREE (e/w) won the Sussex Stakes last time – beating Poetic Flare by 1 ¾ lengths and that form has been franked again since. She’s got quicker ground here and is also up to 1m2f for the first time. She’s been running as if this trip is within range and having won last time on softer ground that showed to a degree, she’s got a bit of extra stamina. With the age and fillies allowance a further plus – getting 10lbs off Mishriff – then a chance is worth taking on her getting the longer trip.