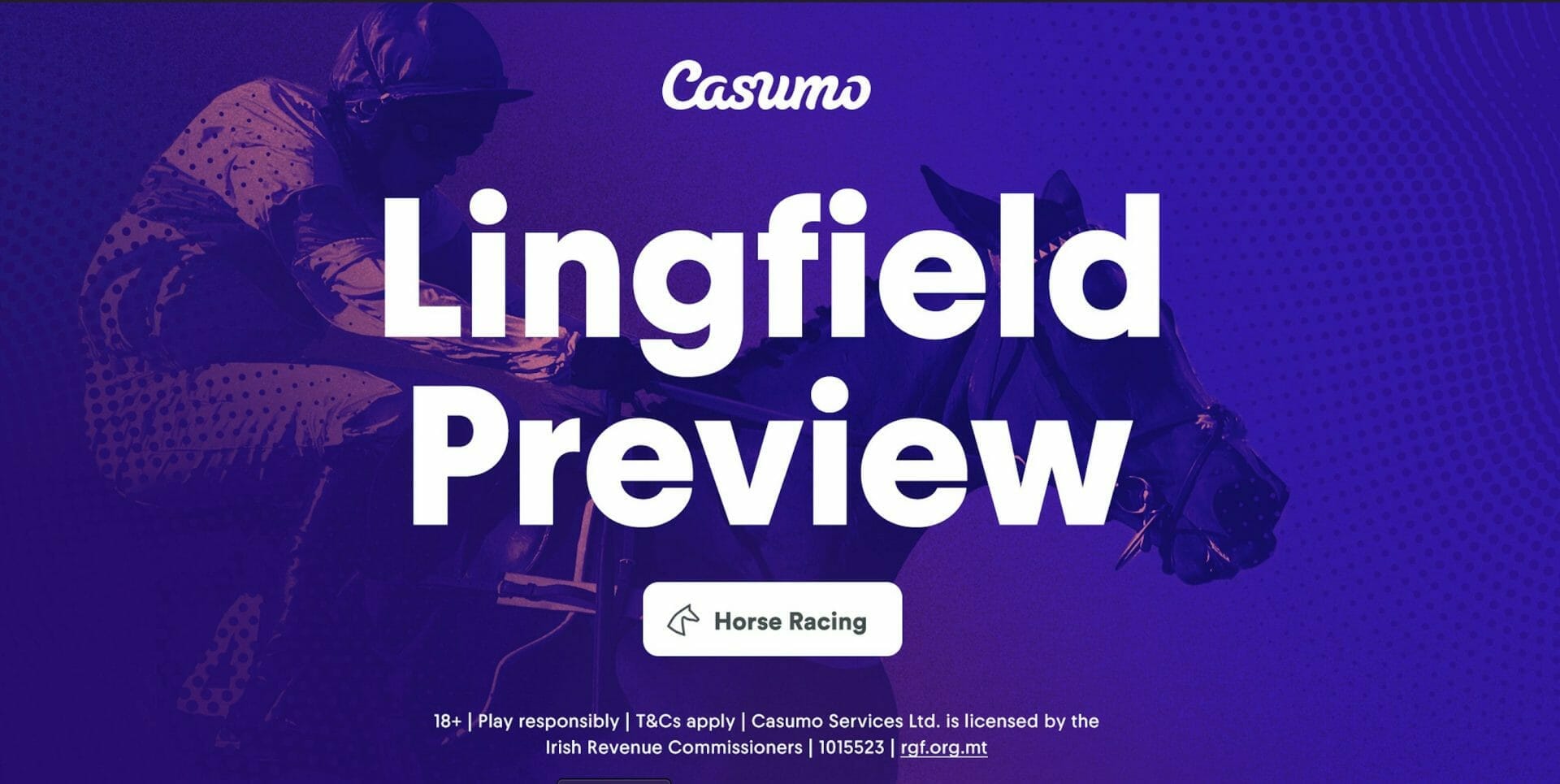 Another Casumo-sponsored afternoon this Tuesday as the SKY cameras head to LINGFIELD for a 7-race flat card on their AW track.

CASUMO VERDICT: Prince Rock, Delicate Kiss and Ford Madox Brown are all proven course and distance winners that command respect, while the Hollie Doyle-ridden Miquelon has a consistent profile and should not be far away, but does have a lot of weight to carry. But the two picks are the Charles Hills-trained MUMTAAZ (e/w) and DISCOMATIC, from the Andrew Balding camp. The former was a beaten favourite at Doncaster last time out but wasn’t beaten far and is down a pound. This is only his second run on the AW and William Buick catches the eye in the saddle. Discomatic is the only last time out winner in the field after a nice success at Brighton last time out. Up 11lbs for that is a tad harsh, but 5lbs of that is offset with the useful Callum Hutchinson booked to ride. His record in the AW is decent too, with 5 top two finishes from just seven runs.

CASUMO VERDICT: We’ve three newcomers in the field here – Think Trigger, Drag Race and Moel Arthur, so the betting will be the best guide towards their chances. Of those that have run, the Marcus Tregoning team have a fair 19% record with their 3 year-old at this track, so their Halcyon Spirit is one for the shortlist. But the worry here would be that he’s looking very exposed now with seven career runs and is yet to win. The same applies to the Richard Spencer runner – Danni California – who has run well in her opening five starts but is yet to win. So, a chance is taken on BREAKFASTATTIFFANYS, who gets weight all round and carries only 8st 9lbs. She ran in a better race last time out at Newbury but that also came off a 4 month break so can be expected to have come on for that. Jockey Tom Marquand is the icing on the cake and he has a 19% record riding 3 year-old here at Lingfield.

CASUMO VERDICT: Nordic Glory was a nice winner over this course and distance last time out and from stall 4 has to be respected again. He’s up 4lbs in the ratings though and will probably need to improve again. The fourth horse in that race Nordic Glory won was the James Tate-trained – GIFT HORSE. This juvenile is now 4lbs better off though here and William Buick, who has a cracking 32% record riding 2 year-olds at the track, is doing the steering – she’s taken to reverse the form. Whistledown, Brown Owl and Black Hill Storm are others to note, but with a 23% record with his youngsters at the track, the David O’Meara-trained SHAMLAAN is the other play. Beaten just a shorthead last time at Catterick, but is making his AW debut here today and gets in here with just 8st 9lbs to carry and weight off all the others.

CASUMO VERDICT: TROUSER THE CASH did it nicely at Yarmouth last time out and despite being 4lbs higher here is a sprinter in-form and gets the call. Draw 2 looks ideal and the switch to the AW will be fine having won twice on the sand surfaces at Wolverhampton and Chelmsford. Thegreyvtrain and Sir Hector are the two proven course and distance winners in the field, while Storm Melody and Kath’s Lustre are winners at the course, but over further. The other of interest though is the Seamus Durack runner – EXCELINTHEJUNGLE (e/w). The yard boasts a useful 19% record with their 4+ year-olds at the track and this 5 year-old hasn’t been disgraced in his last two starts with close seconds at Southwell and Wolverhampton. Draw 4 looks fine and having been running over a bit further recently it’s interesting that connections are reverting him back to the minimum trip.

CASUMO VERDICT: Course winner GAVLAR (e/w) is certainly well-handicapped on old form and ran well (2nd) last time at here over this trip. He’s up 2lbs for that, but in this slightly better race gets in with a featherweight of just 8st 2lbs to carry – last time he raced with 9st 12lbs! Yes, he’s no spring chicken at 10 years-old but that last run showed he still retains his ability and might just have another race in him. Nicks Not Wonder has a bit to prove over this longer trip having faded over 1m6f at Wolves last time out. Tindrum, Retrospect, plus CD winner Bird For Life are others to have on your radar, but the other selection is the John Butler runner – ARABESCATO. This 4 year-old is only up 2lbs for his narrow win here last time out but unlike some of the others we at least know he stays the trip well. He’s also raced with 10st and 10st 1lb the last twice, so with 9st 7lbs this time will find things a bit easier on that score.

CASUMO VERDICT: Some big yards on show here. The William Haggas camp introduce newcomer – Gaassee – who is a well-bred Sea The Stars colt. The yard have a 27% record with their 3 year-olds at the track and is sure to be well-tuned up for this debut. The Stoute camp run Almaan, who ran a fair debut (4th) at Yarmouth in August, but flopped when upped to this trip last time at Goodwood so has a bit to prove. Victory Roll and Master Of Souls look to be going the right way, but the clear pick here is the Gosden runner – EMBLEM EMPIRE. The yard has actually won this race for the last two seasons too and boast an impressive 42% record with their 3 year-olds at the track. He ran well on debut at Kempton last time out (2nd) and has Master Of Souls back in third that day. That also came over a mile but ran on really well in the closing stages to suggest this step up to 1m2f will be right up his street.

4:20 – Gamble Responsibly With Casumo Handicap Cl5 (3yo+ 0-75) 1m2f SKY CASUMO VERDICT: Pride Of England was a winner over this course and distance back in March, but has not backed that up when upped in trip the last three times. Back in distance here helps and he’s also down in grade here so it would be no shock if he bounced back to form for the Clive Cox yard. Time Interval will be another suited by the drop back to 1m2f after running out of petrol over 1m4f last time at Leicester. The consistent Mafia Power shouldn’t be far away either, but with just one win from 18 starts, he’s not an easy horse to win with. Fox Leicester is the only last time out winner in the field, but that came over a mile at Chelmsford. He’s up 5lbs for that and being a proven CD winner will be fine over this longer trip. But the call is the lesser exposed BADRAH, who wasn’t given a hard time at Kempton last time out. She won on debut so has clearly got ability and with just two career outings will have a lot more scope than most of these. She’s bred to stay this longer trip and William Buick catches the eye in the saddle. The other pick to have onside is LIGHTENING SHORE (e/w). This Richard Hughes runner was running on well to be fourth at Chelmsford last time out so is another that should enjoy this extra two furlongs, while the first time cheekpieces are an interesting addition.