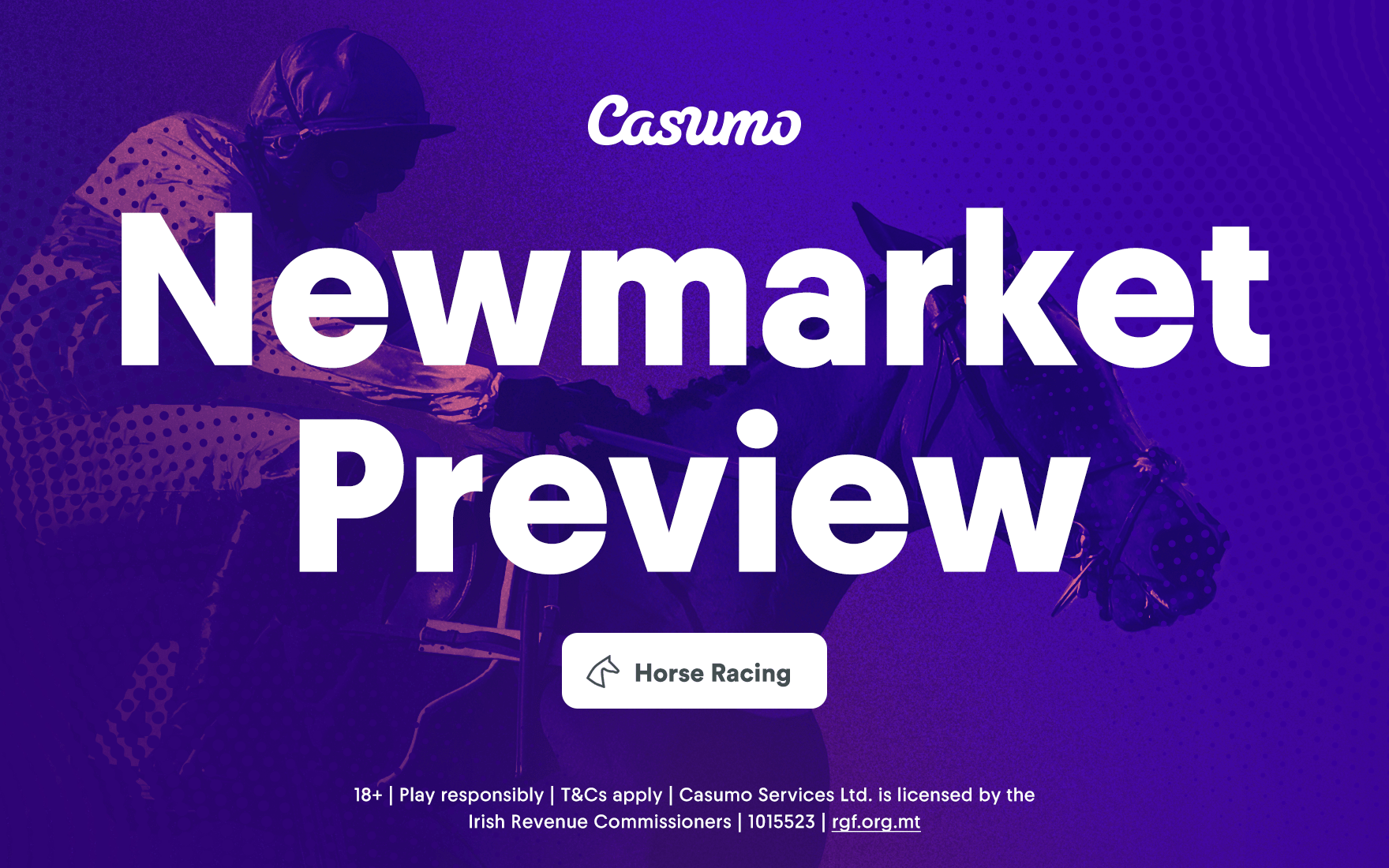 The three-day 2021 Newmarket July Meeting is the highlight this week – running from Thursday 8th till Saturday 10th July.

Here at Casumo, we’ll be with you through the fixture to cover all the main races with key trends and our verdicts.

We continue on DAY THREE, with four LIVE races with the Darley Group One July Stakes the main event.

CASUMO VERDICT: The first thing to note here is that horses drawn 10,11 or 13 have won two each of the last 12 runnings – good news for Professional Widow (10) and Riknnah (11). We’ve also seen 11 of the last 12 winners carry 9-2 or less in weight, but that would only rule one out – the top-weight Star Of Emaraaty, who is ridden by Frankie Dettori. Recent winners Spirit Of Bermuda and Kingmania can go well and are respected, plus Samoot and Al Saariyah are others to note. But the two I’ll be siding with here are the already mentioned RIKNNAH and NEBULOSA (e/w). The former heads here having won her last three and even though she’s only just got home the last twice is a proven CD winner and might just have a bit more up her sleeve than winning margins suggest. She’s up only 3lbs for her last win too as the handicapper may have trouble assessing her and with just four career runs there should be more improvement to come. The Andrew Balding team have a decent 24% record with their 3 year-olds at the track so that’s a plus for their Nebulosa. This filly hated the heavy ground at Haydock last time, plus didn’t really stay the mile trip that day either. Back to 7f will help as will the quicker ground – Oisin Murphy rides.

CASUMO KEY TREND: 17 of the last 19 winners had won over 7f before

CASUMO VERDICT: With 15 of the last 19 winners carrying 9-4 or less in weight, this would be a slight negative for the top-weight Qaader from the Mark Johnston yard. The Haggas-trained Kaheall has improved with each of his last three runs – winning them all well. He steps up in grade again here and is only 2lbs higher than last times win at Chelmsford so has to be respected. Titan Rock won at Redcar last time but this is a step up in class and a 5lb hike in the ratings makes life harder still. Latest Generation can’t be ruled out, while Darvel and Seasett have a bit to prove after poor last runs. So, the safer option is the Godolphin runner – ROYAL FLEET. This 3 year-old has only had two career runs but has won them both and caught the eye leading from the front at Yarmouth last time out over this 1m trip. Expect him to race up with the pace again and having been freshened up with a small break (3 months) might just be hard to peg back. William Buick rides.

CASUMO VERDICT: The Godolphin boys and Charlie Appleby have won 3 of the last 5 runnings of this race and are double-handed this year with recent winners – Private Signal and Native Trail. Both look useful prospects with Native Trial winning well at Sandown last time out on debut, while Private Signal was second to another of today’s runners – Austrian Theory – at Donny on debut and built on that to win at Leicester last time. Mr McCann is owned by a group of well-known footballers and this horse has hit the back of the net the last twice to warrant respect – he comes from the Tom Dascombe yard that also have Mot And The Messer. Great Max was a fine third in the Listed Chesham Stakes last time and should go well, but the better form on show comes from DHABAB, who was a fair 6th in the G2 Coventry Stakes last time at Royal Ascot. This Gosden runner didn’t get the best of runs that day but stayed on well to suggest this step up from 6f to 7f will be right up his street. Of the rest, PAPA COCKTAIL (e/w) can go best of the bigger-priced runner. He improved last time to win at Haydock on only his second career start and looks the sort to have more to come.

CASUMO VERDICT: A tough renewal of this race as always, but last year’s winner – MOTAKHAYYEL (e/w) – is a good place to start. Frankie Dettori has been booked to ride this Richard Hannon runner, who bounced back to form last time here a few weeks ago to run second. He’s up 4lbs from last year but does seem to run well here on the July course and will have every assistance in the saddle from Frankie, who’s won this race three times before and twice in the last five runnings. 4 and 5 year-olds have won 12 of the last 19, so this is a slight negative for the 3 year-old – Fundamental, plus the 6+ year-olds in the race – Tadleel, Count Otto, Cliffs Of Capri and Raising Sands. It’s also a race the Richard Fahey yard have won three times since 2011 – they run the already mentioned Tadleel, but also have NATIONAL LEAGUE (e/w) and GABRIAL THE WIRE (e/w) – both are worth an each-way interest. National League returned to form last time with a good second at York and providing the ground stays on the quicker side can go well. Drawn 20 is fine with horses drawn in double-figures winning 8 of the last 10. Then Gabrial The Wire wasn’t suited by the softer ground last time at Haydock so will be more at home on this quicker surface. He gets in here with just 8-5 to carry too, which is 15lbs less than he raced with last time. Others to note are recent winner Chelmsford scorer – Jumaira Bay, while the William Haggas-trained Ametist has been all the rage for this in the ante-post market having won his last four. He’s clearly a progressive 4 year-olds and is also a proven CD winner at the track, but is up another 6lbs here and doesn’t look great value in a race of this nature. PEROTTO is another that’s been high up on the list in the betting for this race and has a similar profile to Ametist having won his last two. Is up just 2lbs for his last win at Ascot in the Britannia Stakes, has options from draw 11 to go either side and looks to have a dangerous weight of just 8-8. Fundamental and Boardman are others to respect.

CASUMO KEY TREND: Just one horse aged 6+ has won the race since 1968

CASUMO VERDICT: Several chances here in what looks an open renewal of this Group One. The David Evans-trained Rohaan has risen up the ranks to win his last three, one of which was the G2 Sandy Lane Stakes at Haydock, when seeing off another of the runners here – Dragon Symbol – by a nose. He acts on all ground and should go well. The already mentioned Dragon Symbol has since run well to be second in the Commonwealth Cup at Ascot – winning that race but was placed second after a stewards’ enquiry. CREATIVE FORCE (e/w) is another progressive young sprinter – winning his last four, including the Jersey Stakes last time at Royal Ascot over 7f. The drop back to 6f will be fine and despite this being a step up again is worth having onside. Starman, was last seen winning the Duke Of York Clipper Stakes by a neck and having won 4 of his 5 starts is another to consider. But of the main players, OXTED gets the verdict. This Roger Teal runner was a good winner of the King’s Stand Stakes at Ascot last time over 5f but won going away that day so this step back up to 6f is fine and he’s also the top-rated in the field and a proven CD winner at the track. Of those at bigger prices, G1 winner – Supremacy – can’t be ruled out if bouncing back to form in the first-time blinkers, while Extravagant Kid and Art Power have place claims too. But the Hollie Doyle-ridden GLEN SHIEL (e/w) ran an excellent second at Ascot last time in the Diamond Jubilee Stakes and rarely runs a bad race. He’s the second highest-rated in the field (117) and acts on all ground.