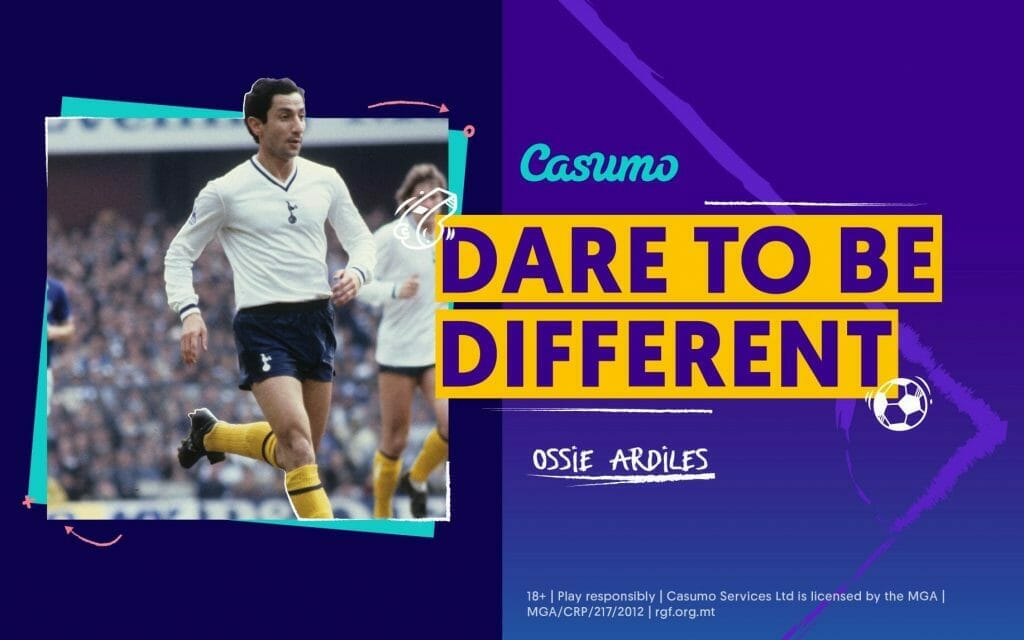 Dare to Be Different with Ossie Ardiles: Current affairs

As part of our Dare to Be Different series, we caught up with Spurs legend Ossie Ardiles, and he gave us his view on the Harry Kane transfer saga on Friday 24th September 2021.

Tottenham legend Ossie Ardiles has told Casumo that Harry Kane will get back to his best this season, starting against Arsenal on Sunday, and that he can see the striker staying at Spurs to break Jimmy Greaves’ goalscoring record for the club.

Kane has struggled to return to form for Tottenham this term since seeing a move to Manchester City blocked in the summer and has yet to open his account in the Premier League this season.

However, Ardiles, who both played for and managed Spurs, is expecting Kane to come good soon, having previously started slowly for the club in seasons gone by.

“I don’t believe he’s suffering from a hangover from the summer, not at all,” Ardiles said. . “I’m very much expecting Harry Kane to get back to his best this season. With every season he’s been with Tottenham, for one reason or another, he has always started in a slow manner. But at the end of the day, he’s then finished up as the top goalscorer in the Premier League.

World Cup winner Ardiles also believes Kane could stick around at Tottenham beyond this season and has the ability to overtake Spurs legend Greaves’ record of 266 goals for the club. Kane is currently on 223.

“I can see him staying at Tottenham,” Ardiles said. “A lot of this is to do with Harry and with (chairman) Daniel Levy. I believe that Harry is happy at Tottenham and at the moment he is focused on playing football, scoring a lot of goals and doing the best he can.”

Ardiles added: “If he sticks around, Harry can overtake Jimmy Greaves’ Tottenham record. It’s not going to be easy, Jimmy’s record was absolutely outstanding. Jimmy was an extraordinary player, a very special player, like Harry is as well. The amount of goals they’ve both scored is incredible.

“Both of them are leaders. Jimmy was a leader in the way he played football, people relied on him to score goals. And Harry is the same, they are very similar. Records are there to be broken. The record Jimmy had was outstanding, but I believe one day Harry can beat that.”

Kane and Tottenham’s next game is the north London derby against Arsenal on Sunday. Ardiles feels Spurs are good enough to defeat the Gunners and can qualify for the Champions League this season, though they shouldn’t be wasting time paying attention to how their rivals are doing in the Premier League table.

“Tottenham can’t base their season on having more points than Arsenal. It’s not going to be a good season just because they finish with more points than them. Tottenham have their own ambitions, which are to be in the Champions League. And where Arsenal finish particularly, I don’t care.”

Ardiles added: “I think Tottenham can beat Arsenal on Sunday. They have more experience, I think they have better players. It’s going to be very tough of course because it’s a derby, every single derby is. But I have absolutely full confidence in Tottenham. I believe they are going to get the three points.”

Another Tottenham player who has yet to get going this season has been Tanguy Ndombele, but former midfielder Ardiles says Spurs will eventually get the best out of their £55 million signing.

“(Tanguy) Ndombele is having a difficult time, he cost a lot of money and we are still waiting for him,” Ardiles said. “He’s very talented yes, but he still needs to adapt to English football. He’s proven it before – when he was playing in France he was very successful there, which was why he cost so much. He needs to adapt and sometimes this is not easy. I hope it’s not going to take a lot of time, but I do believe we will see the very best of him.”

Check out all our Premier League odds here.