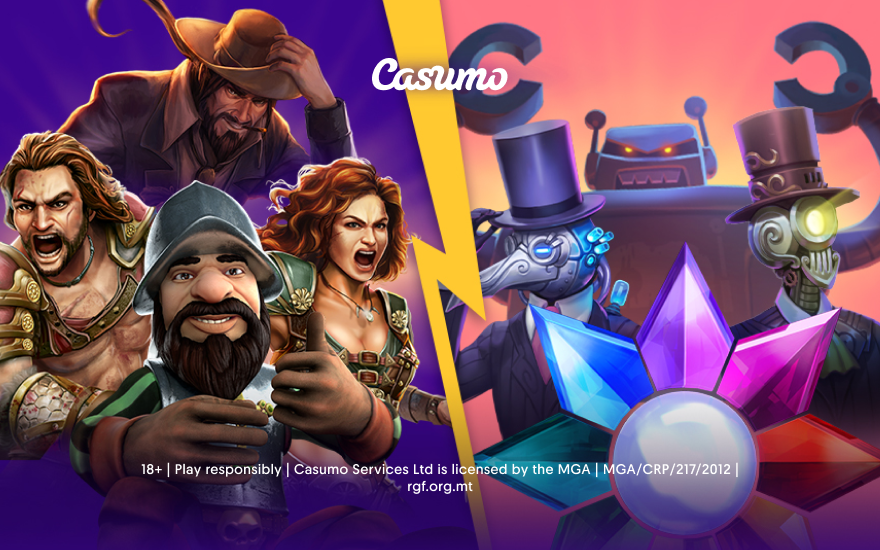 Travel through Time at Casumo

The one constant in life is change, and perhaps that’s what makes time travel such an irresistible idea. The world evolves so much from decade to decade, century to century, epoch to epoch, but we’re forever stuck in the present. We can remember the past, we can imagine the future, but we can’t visit either—or at least, not yet. Some scientists think it might be theoretically possible, or at least not impossible. Even if it is far-fetched, it’s still fun to think about because it would be so cool.

December 8th is official Pretend to Be a Time traveller Day, a day dedicated to celebrating the very idea of time travel. There’s lots of ways to celebrate. Here’s a few suggestions:

Read on to learn about our best historical and futuristic games.

Travel back in time…with Casumo slots!

The following games, which take us back in time from the days of the Wild West all the way to the Jurassic Period, are some of our best, most immersive slots, sure to give you that feeling of having been transported to a whole other era. 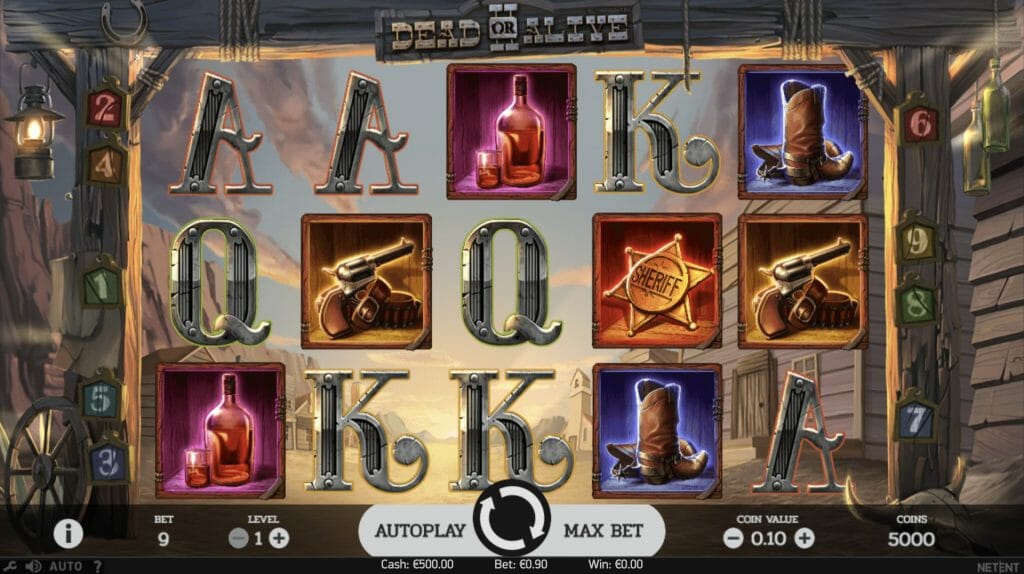 Imagine if you could travel back in time to the dusty main streets of frontier towns in the American Wild West and meet the rugged characters we know from the history books and Hollywood. Well, who says you can’t? Dead or Alive 2, a sequel to the popular NetEnt slot, introduces you to Jesse James, Bell Star, Billy the Kid, and many more. The High Noon Saloon Free Spins feature uses the MAX concept to potentially grant payouts of up to 111,111.11x your stake. Well, howdy do! The slot has a relatively high RTP of 96.8% with the most cowabunga-inspiring wins coming from the free spins features. 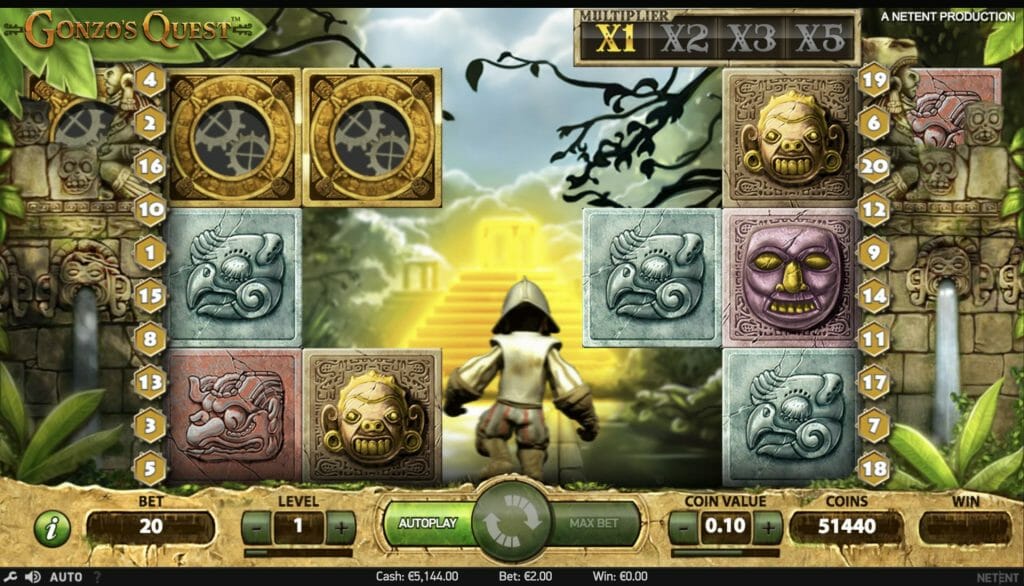 One of the most enduring, iconic slots out there, Gonzo’s Quest from NetEnt takes you into the jungle in search of El Dorado, the lost city of gold. Gonzo is inspired by Gonzalo Pizarro, who led a failed expedition in search of the city some 500 years ago.This was the first slot to feature Avalanches when it was released in 2011, where winning combinations crumble to dust, making room for new Incan symbols carved into stones that cascade down the screen like a rock slide. When the Free Falls feature is triggered, the 15x multiplier can earn you 37,500x your stake on each free spin.

Go for the gold! 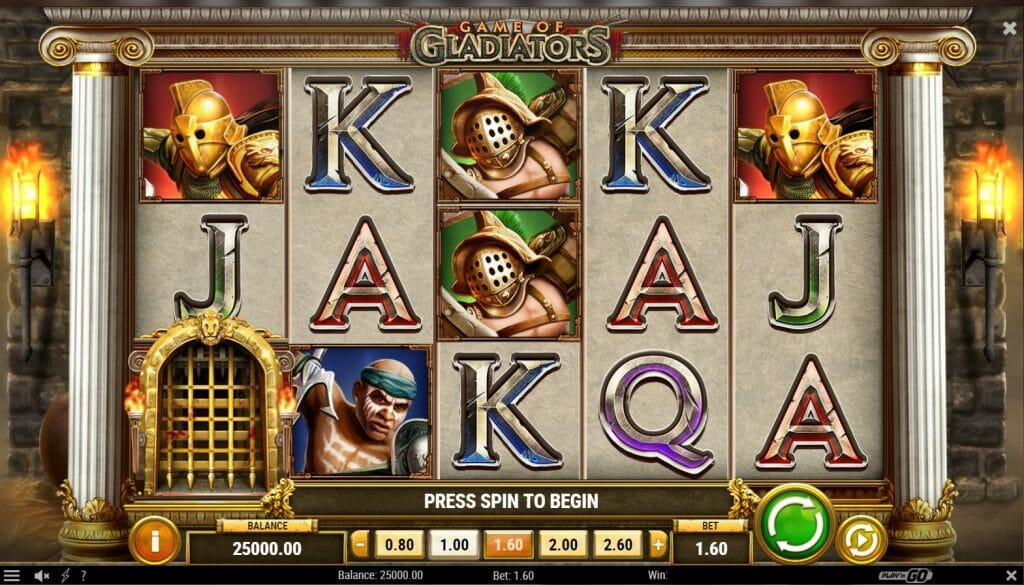 Known for entertaining the Roman Republic with violent combat against wild animals and each other, gladiators remain some of the most admired fighters of all time. You too can join in the fight, although this time, the tigers are on your side—in the form of wilds! This complex, multi-level slot has bonus features within bonus features. Much like in the actual arena, there’s never a dull moment!

Trigger 1 of 5 Primus mystery features to win extra tigers and expand gladiators across several rows to increase the likelihood of paylines. Three portcullises (heavy Roman gates) trigger the Enter the Arena feature where you can choose your own gladiator—female Amazonia or male Sparticus—and fight it out for the Victory Prize. 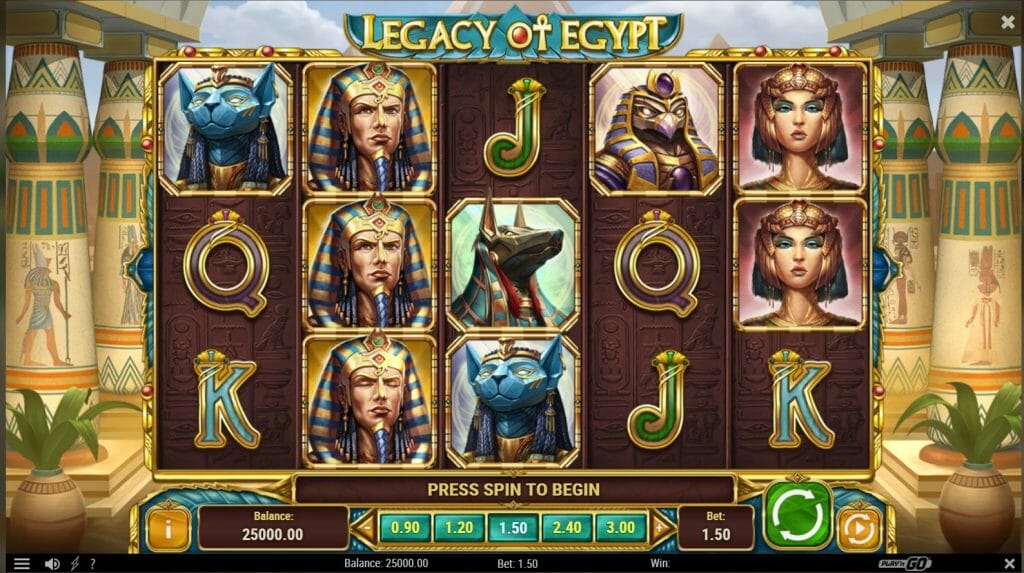 If you could have anyone over for dinner, dead or alive, wouldn’t Cleopatra be a fantastic choice? Besides being a total boss, she’d have all the good gossip from the Egyptian royal court. The good news is, you can hang out with Cleo (plus Pharoah and various animal gods) on Legacy of Egypt where, in a luxurious palace courtyard, you can trigger bonus spins with the help of the wild scarab beetle on this highly volatile slot. Get 3 or more pyramid scatter wilds to win back 5x your stake and activate the free spins feature, which takes you to the Wheel of the Gods, where you can spin a golden wheel for 3 to 20 free spins. 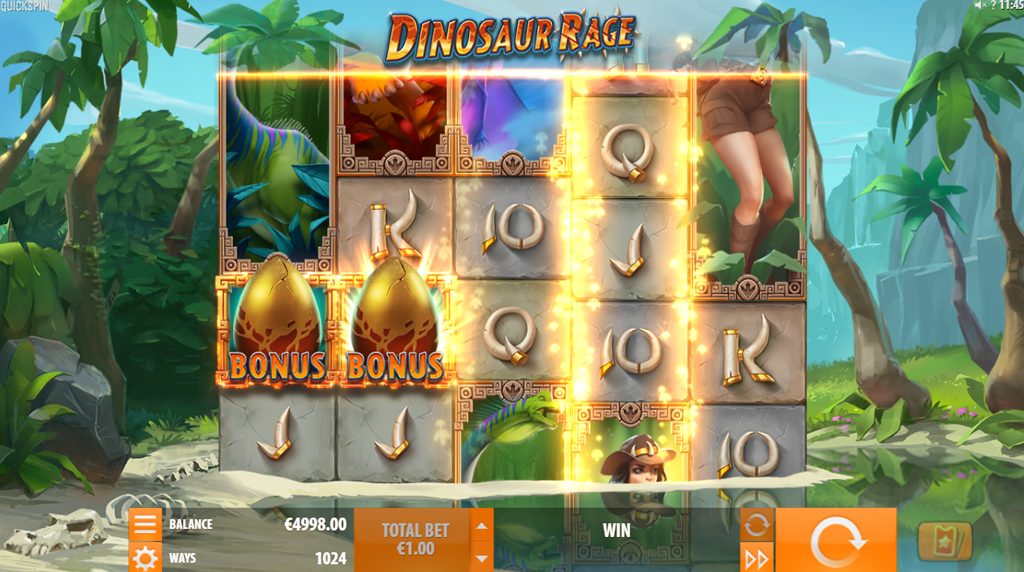 Join Anna, the animated character who keeps an active eye out for enraged dinosaurs in the overgrown prehistoric jungles of hundreds of millions of years ago. A suspenseful soundtrack immerses you fully in the dangerous landscape where giant reptiles reign. Larger-than-life medium and high-value symbols grow up to 4 rows high. If Anna manages to cover 4 rows, she triggers the Pay Anywhere feature, meaning you get a payout for any matching symbols, regardless of whether or not they’re in a standard payline. Scattered Nest symbols trigger Dinosaur Rage! Free Spins with enraged dinosaurs growing to cover 4 rows, thus triggering more Pay Anywhere spins. As you can see, things in the primordial jungles escalate quickly!

Casumo Slots that are Out of this World

Can you conceive of a future with intergalactic space travel, aliens, and advanced artificial intelligence? Let your imagination run wild with these sci-fi and space-themed slots available at Casumo Casino. 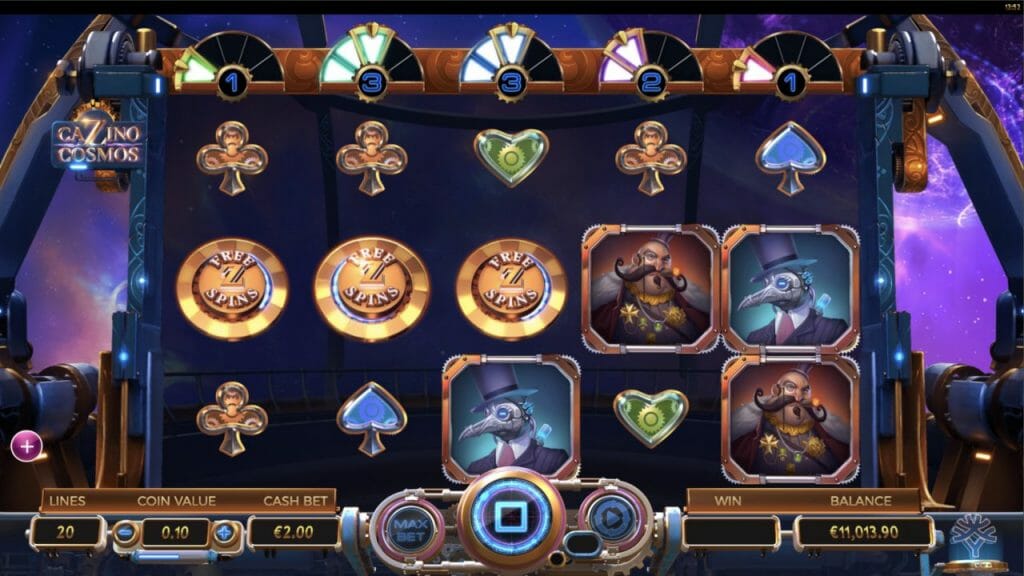 Jump aboard a steampunk spacecraft and meet various eccentric characters as you make your way through a glittering interstellar landscape in Cazino Cosmos, the sequel to Cazino Zeppelin from Yggdrasil. The most important of the characters is Stella the Matriarch, a wild during regular play and sticky wild during free spins, locking in place across the reels to get you closer to big wins on this highly volatile slot with a potential to win 11,821x your stake. Collect 5 Stellas on a single reel to take Free Spins to a whole other level with the Collections Free Spins feature. In this mode, each reel has its own special extra to offer, for example Reel 5  gets you Expansion Free Spins where all new wilds are double stacked. That’s a lot of Stellas! 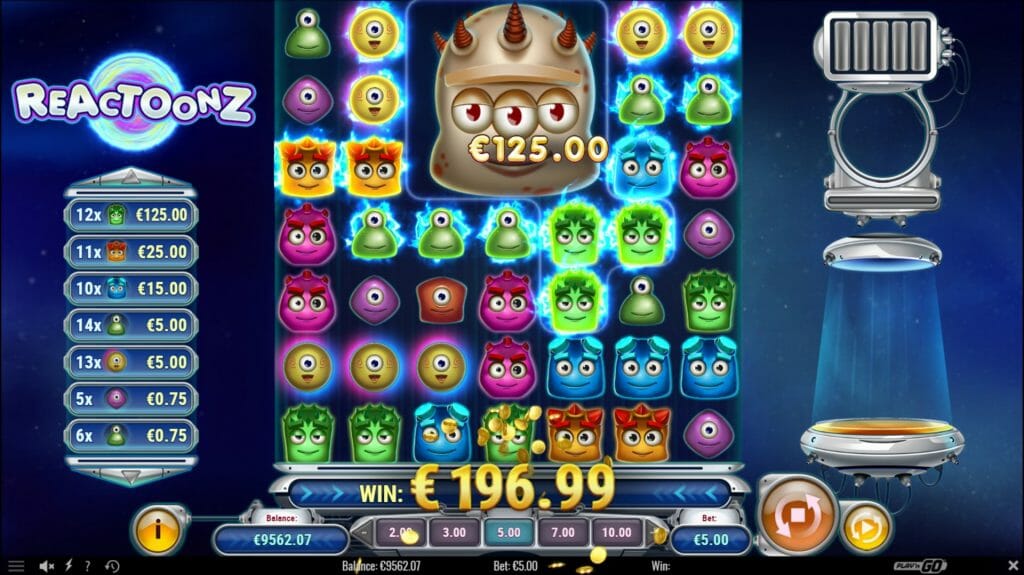 If in the future humans make contact with an alien species, please let them be like the cutie-pies in Reactoonz! The symbols on the 7X7 grid come in the form of wild vortexes and cartoon aliens. The pink alien is worth the most, with five in a cluster paying out 750x your stake (the Cluster Pays Engine means that it’s a win as long as 5 or more matching symbols are touching). Each win charges the 5 Quantum Leap Meters, triggering various Quantum Features. When all five meters are charged, the Gargantoon feature comes into play, releasing a slew of wilds that test the very laws of physics!

Have an alien counter

And if you can’t get enough Reactonooz, there’s also a fantastic sequel, Reactoonz 2. 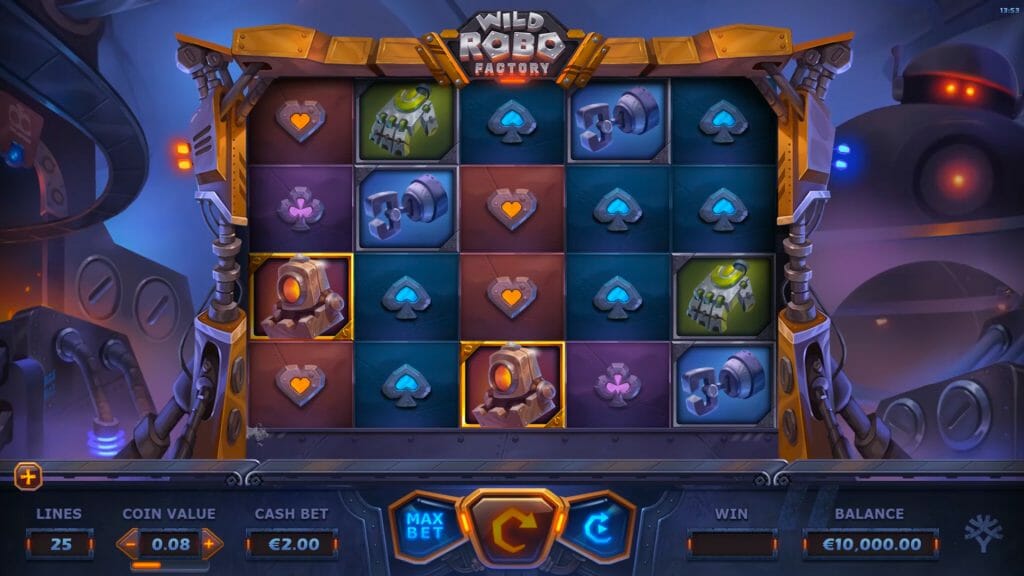 With all the recent technological advances, perhaps the future that’s easiest to imagine is one where robots rule. Get a glimpse of what it might be like with Wild Robo Factory, which takes you inside a robot assembly line. Robo Wilds combine with the high-valued symbols in the form of robot parts for larger payouts. This slot has exceptionally creative graphics and features, just like you’d expect from our robot overlords. During the randomly activated respin feature, little robos glide along a conveyor belt and block out parts of the grid while the reels spin away. Three or more Free Spins symbols activate the Free Spins feature, which brings up to 15 little robos back to the conveyor belt. If the conveyor belt reverses randomly, the robo helpers will reverse 1 to 9 spaces and start all over again!

Funnily enough, they say that looking into a telescope is like looking into the past because whatever we see has been traveling for years and years at the speed of light before it hits our little human eyeballs. Maybe in the future there will be a way to see stars up close, in real time! For now, there’s Starburst Xxxtreme, a game that takes you to galaxies far, far away to play an extreme version of the classic Starburst slot, with dazzling star symbols. The rainbow star is wild here, and it also triggers the re-spin feature during which the combined multipliers could potentially add up to 450x your stake. If you want to get really extreme, you can play the Xxxtreme Spins feature, allowing you to opt-in to purchase spins with guaranteed wilds. With a maximum of 200,000x at its most Xxxtreme levels, this is considered a high payout slot.

Shoot for the stars

If you’re ready to venture to another era after reading about our past and future-themed slots, then all you need to do is log in to your account (or sign-up for a free account) and find your favourite slot in our casino Game Browser.