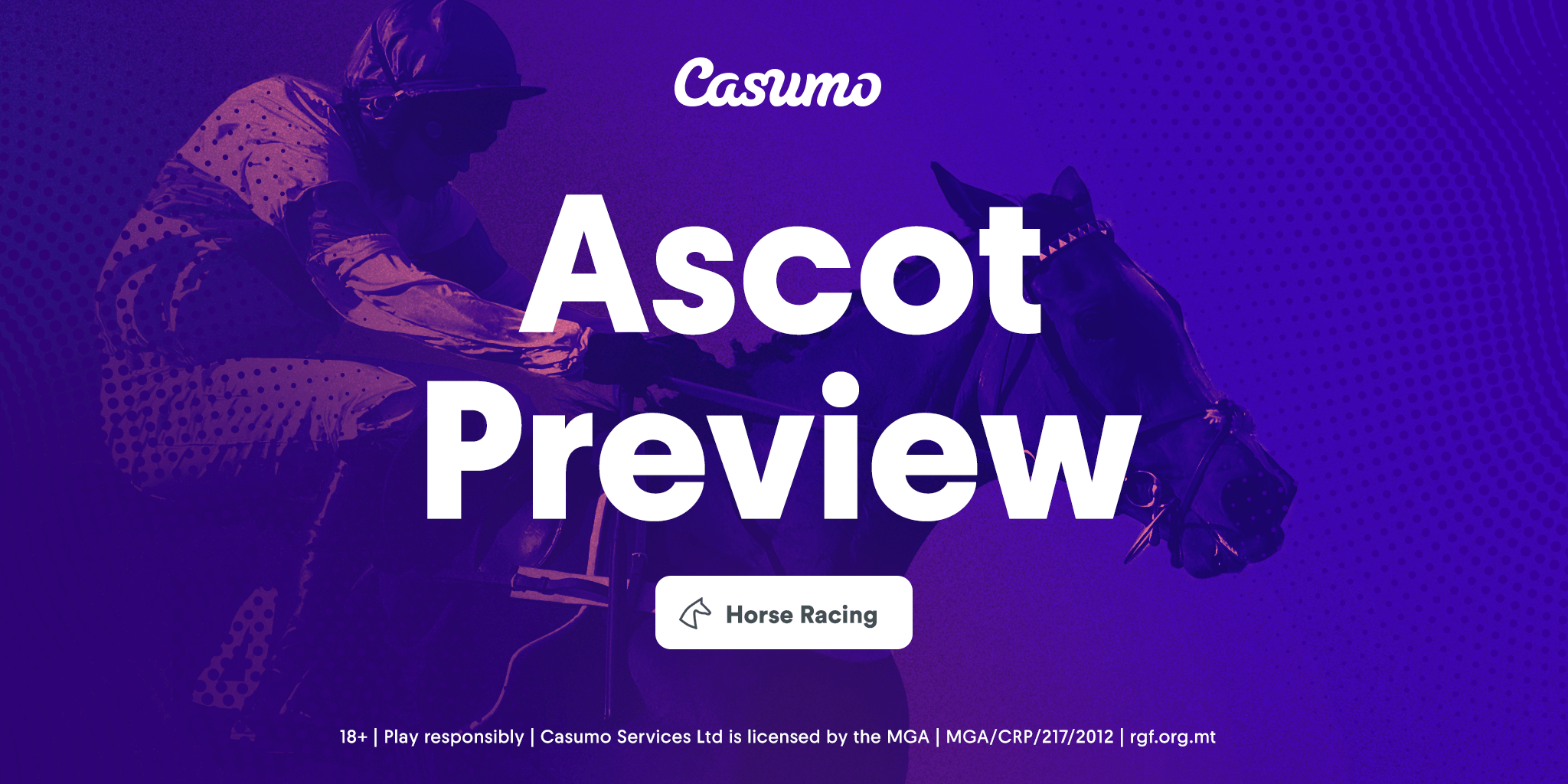 More top action this week as the horse racing bandwagon turns its attention to the 2021 Royal Ascot Meeting. The five-day meeting (Tues 15th-Sat 19th June) is always one of the highlights on the flat racing calendar and we’ve got it all covered!

The action continues on Wednesday 16th June with a top card that in spearheaded by the Group One Prince Of Wales’s Stakes.

Did You Know? 18 of the last 19 Prince Of Wales’s Stakes winners were aged 4 or 5 years-old, while 13 of the last 19 successful horses in the race were previous Group One winners.

Like all big race days, here at CASUMO we’re in your corner with key trends and stats, plus our free tips – use these trends to narrow down the field and find the best profiles of past winners.

CASUMO VERDICT: Another 2 year-old race to get us going for day two. Therefore, the betting will be a good guide with these youngsters all lightly-raced. With Frankie Dettori booked to ride the US runner – Artos – then this filly will be popular. She was a nose winner at Churchill Downs last time out over 5 ½ furlongs, while the first-time visor is also interesting here. Another popular one is sure to be the Aidan O’Brien-trained Yet, who got up on the line to win on debut at Dundalk last month and she sports the first-time tongue-tie here. We’ve a few other Irish runners too in Harmony Rose and Orinoco River, but the form pick for me is the Listed winner – NYMPHADORA – who won well at York last month. She had Crazyland back in third that day and Mas Poder in fourth, but at the line had 1 ¼ lengths in-hand and you felt it might have been more. Beautiful Sunshine is one of the more experienced in the field with three runs (2 wins) and can go well too, but her last two wins have been with cut in the ground, so that might be a worry if there is no rain. The other two of interest though are the Clive Cox-trained GET AHEAD (e/w) and the already mentioned MAS PODER (e/w). The former hails from a yard that won this in 2017 and have a 19% record with their 2 year-olds at the track. She was a nice winner over this course and distance last month so that track experience is a plus and has been freshened up with almost 6 weeks off since. Then, Mas Poder, caught the eye when running green but a decent fourth on debut behind Nymphadora at York and with the expected improvement looks another to have onside from the Kevin Ryan yard.

CASUMO VERDICT: A race dominated by the Irish, with six of the 15 runners. Of those six, Aidan O’Brien, who has won the 5 of the last 8 runnings, has three – WORDSWORTH, ARTURO TOSCANINI and KYPRIOS. Jockey Ryan Moore has opted to ride their Wordsworth, so this 3 year-old is likely to be the most popular in the betting. That said, he hung a bit last time out and just got run out of things in the closing stages at Navan over. Moore would have had the pick, but he doesn’t always get it right – just look at the Epsom Oaks earlier this season! Therefore, I think another O’Brien runner – ARTURO TOSCANINI (e/w) – might be worth chancing. This 3 year-old stayed on well over 1m2f last time at the Curragh wo suggest this step up in trip will be a plus and Wayne Lordan, who was on that day, remains in the saddle. He’s also officially rated a pound higher than Wordsworth. Of the rest, Taipan, Ruling, Kemari, and course winner Stowell enter the mix, but the Mark Johnston stable are another that have a good record in this race – they run Dancing King, who has won his last four, and GOLDEN FLAME (e/w). Both look improving stayers, but the last-named got better the further they went last time out over this 1m6f trip and we know he will stay the distance very well. He beat Pied Piper by an easy 4 lengths that day and Derby-winning jockey, Adam Kirby, has been booked to ride.

CASUMO VERDICT: Some nice milers on show here, but the form picks are LADY BOWTHORPE and Queen Power. The pair are rated 117 and 113, so the selection has 4lbs in-hand on these terms and that should be enough. This William Jarvis runner actually beat Queen Power by a head at Newmarket in May over 1m1f and has since run the useful Palace Pier to 1 ½ lengths in the Lockinge Stakes at Newbury – that’s the best form on offer and a repeat of that would make her hard to beat. Queen Power will give her a race though and comes here having won the G2 Middleton Stakes easily over 1m2f at York last time. But I’m just not sure the drop back to a mile will suit. Her best recent runs have been over 1m2f and even though she’ll be staying on well at the depth, she’ll need the pace to stay in the race during the first half of it. Of the rest, Champers Elysees, Double Or Bubble and ONASSIS (e/w) are respected with the last-named worth a dabble. This Charlie Fellowes runner landed the Sandringham Stakes at the Royal Meeting last season and is the only CD winner in the field. She’s done well since when upped in grade and rounded off last season with a fine 6th (of 16) in the G1 Champions Sprint Stakes over 6f. She acts on ay ground and won at this meeting off a long break last season, so the 242-day break isn’t a worry.

CASUMO VERDICT: Looks a three-horse battle here with last year’s winner – Lord North – and the two Aidan O’Brien runners – Love and Armory – the trio in question. Ryan Moore rode Armory to win the G2 Huxley Stakes at Chester easily last month, but the fact he’s deserted him for Love is interesting. This classy filly landed the 1,000 Guineas, Epsom and Yorkshire Oaks last season and gets a handy 3lbs from Lord North. She’s not been out since last August and this is actually her first try over this 1m2f trip too. We know she stays further so we can expect connections to make us of that but the trip and the fact this is her first run at the track, plus racing against the boys here are all small negatives that make me lean towards LORD NORTH. Last year’s winner bolted up in this race by 3 ¾ lengths and showed he’s better than ever back in March when landing the G1 Dubai Turf at their World Cup meeting. Frankie is the icing on the cake and the Gosden camp have been saying all week this is one of their best chances at the meeting. Of the outsiders, Audarya can go well, while course winners – Sangarius and Desert Encounter – at least have proven form at the track.

CASUMO VERDICT: The Royal Hunt Cup is always a competitive affair and this year is no different with 30 runners. 4 and 5 year-old have the best record – winning 16 of the last 19, so the older horses – Escobar, Trais Fluors, Bowerman, Bugle Major, What’s Up Story, Cliffs Of Capri, Teston and Hortzadar are overlooked. 13 of the last 15 winners also came from a double-figure draw – if this is to be repeated then those drawn low would have this as a negative – Path Of Thunder, Beat Le Bon, Pepperoni Pete, Real World, Fantasy Believer, Irish Admiral, Bell Rock, Eastern World and the well-fancied Finest Sound are those drawn low. Going back to the age trend, it’s the 4 year-olds that have the best recent record too – winning 9 of the last 12 – so the three I like are ASTRO KING, BRUNCH and MAGICAL MORNING. Astro King was only a shorthead behind Finest Sound at Nottingham in April and wasn’t disgraced with a running on third at Thirsk last time. The stiffer track here will help and Ryan Moore takes over in the saddle on this Sir Michael Stoute runner. Brunch has run well this season with a second in the Lincoln and then a neck runner-up at York last time out. He’s up 3lbs more here but wasn’t the best away last time, but probably would have won with a better start. Finally, Magical Morning comes from the John Gosden yard, that won this in 2015. He was last seen running second to Matthew Flinders at Doncaster last year but has been gelded since and could have more to come. He’s been freshened up with 9 months off, but won first time out last season and with another winter on his back will be a much stronger horse.

KEY CASUMO TREND: 13 of the last 15 winners came from a double-figure draw.

CASUMO VERDICT: If Artos goes well in the Queen Mary Stakes (today’s first race) then the chances of RUTHIN will be enhanced massively with Ruthin smashing that one by 6 lengths on debut at Keenland. This is a race the Wesley Ward US yard have won in the past too and Frankie Dettori has been booked to ride. She led from the front on debut and being a filly also gets a handy 5lbs allowance here. Draw 12 also looks ideal and will give her options to go either side of the track, while 10 of the last 13 winners hailed from a double-figure stall anyway. The Ward camp also run Golden Ball, who was another easy winner on debut at Keenland and the fact they are sending her over means she’s respected too. Horses from stall one have struggled, so CD winner Chipotle has this trend to overcome. The Queen won this race 12 months ago too – she tires to follow up with the Michael Bell-trained Spring Is Sprung. Armour, if overcoming the low draw, Dig Two and the Aidan O’Brien-trained Amalfi Coast are all ones to note too, but the other pick is TIPPERARY SUNSET (e/w). He’s now 2-from-2 after wins at Hamilton and Beverley. Draw 18 looks ideal and hails from the shrewd John Quinn yard that are 1-from-4 with their juveniles here at Ascot in recent years.

KEY CASUMO TREND: US trainer Wesley Ward has won 2 of the last 12 runnings.

CASUMO VERDICT: A new race here so only trainer and jockey track stats to go on really. The Sir Michael Stoute yard have a 16% record with their 4+ year-olds at the track so their Ryan Moore-ridden Lights On has to be one for the shortlist. She beat Dreamloper by just a shorthead here last time out and on just 1 pound worse terms shouldn’t be a lot between them again. But I’ll take a chance on the Gosden runner – MOSTLY (e/w) – bouncing back to form. She wasn’t suited by the undulating track last time at Nottingham and lost her action as a result, plus that also came over 1m2f – I feel the drop back to 1m here will suit better having won at Kempton over this trip in March. A 50 day break to freshen up and draw 14 look ideal too. With only average track stats with their 4+ year-olds at the course the Beckett-trained Declared Interest, the Channon runner – Dalanijujo – are overlooked. Several others have cases, including Lola Showgirl, Caspian Queen and Stunning Beauty, but it’s the Joseph O’Brien entry – SO I TOLD YOU (e/w) – that is worth having onside too. This 4 year-old bolted up at Sligo last time out and despite being up 13lbs for that looks a fast-improving sort. The drop back in trip should be fine, but we also know she stays further than this mile and you can expect connections to make full use of that.  Regular jockey, Dylan Browne McMonagle makes the trip over and can also claim a handy 3lbs here.

KEY CASUMO TREND: Trainer Sir Michael Stoute has a 16% strike-rate with his 4+ year-olds at the track.