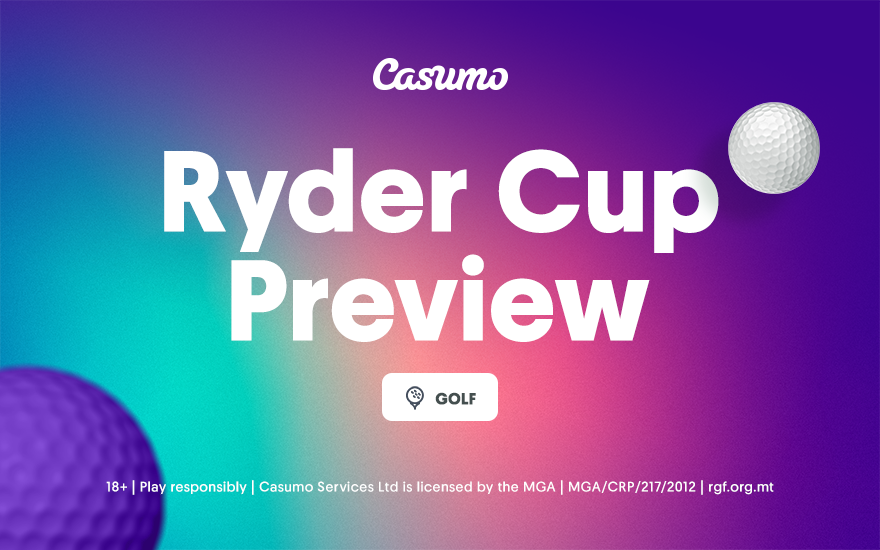 Ryder Cup fever is building! Whistling Straits will stage the biennial matchplay competition between the U.S. Team and Team Europe, which gets underway on Friday. There are bound to be a few nerves for the opening tee shots, but it will be an absorbing few days. We will also check in on the markets to see how the odds are shaping up.

The scene is set for the 43rd Ryder Cup. Team Europe are the reigning champions having stormed to a comfortable win in Paris three years ago. But now they are far away from home, and there will be few cries of ‘Ole, ole’ in the 40,000-strong crowd. Although Europe isn’t fancied, team captain Padraig Harrington showed an inspirational video, designed to stir emotions.

The players saw the video upon arrival at Lake Michigan. In total, there have been 164 players that have represented Team Europe at the Ryder Cup, and Harrington wanted to impress how much of a privilege it is to play in the competition. There is a good blend of youth and experience, although the crop of USA players have a much higher average world ranking.

Of the players representing Team Europe this week, Sergio Garcia stands out. The former Masters champion has a decorated record in the Ryder Cup. In Paris, he became Team Europe’s all-time leading points scorer (25.5 points). But when asked about the significance of it, Garcia said: “The main goal is where the team wants to head to, and that’s what we try.”

Could Viktor Hovland be the surprise package for Team Europe?

There are old heads in the Team Europe set-up, particularly Lee Westwood, who will equal Sir Nick Faldo’s record of 11 Ryder Cup appearances this week. But of the debutants, Viktor Hovland has been a model of consistency. He recently finished fifth in the FedEx Cup. However, he is a supreme driver, and Whistling Straits could suit him down to the ground.

Ryder Cup: Some things you didn’t know about Whistling Straits

It will be a febrile atmosphere at Whistling Straits, but there are perhaps a few things you ought to know about the course. First, it mirrors the classic links courses in Ireland with its coastal landscapes. Covering over 7,000 yards, Whistling Straits is one of the longest courses to have hosted a major. The 15th hole, for example, is a 518-yard par 4.

Collin Morikawa brushes off injury problems ahead of Ryder Cup

Collin Morikawa is raring to go as he prepares to make his Ryder Cup debut. The two-time Major winner has been suffering from a back problem. This was caused when trying to escape ‘sticky rough’ at the Tokyo Olympics, but he has been soldiering on. After starting the FedEx Cup as the No.1 seed, Morikawa faded in the season-ending playoffs.

However, the 24-year-old has brushed aside any issues surrounding his back, and he is in positive spirits. Speaking ahead of the Ryder Cup, Morikawa said: “I’m 100% healthy. Knock on wood right now, but I’m feeling great.” Morikawa has been brilliant with his iron play, and he will be key to the U.S. Team’s chances of success.

Meanwhile, those USA fans hoping to see Tiger Woods prowl or rather walk parts of the course will be disappointed. The former World No.1 — who has been a part of the Ryder Cup set-up in recent years — will not be in attendance at Whistling Straits. He continues to recover from the serious leg injury he suffered in a car crash earlier this year.

The word respect is something that U.S. Team captain Steve Stricker is demanding of the fans this week. Whistling Straits is likely to be a partisan crowd, with around 40,000 American fans expected to pile in and around the course. In the past, things have got a little rowdy at Ryder Cups.

Five years ago, Rory McIlroy requested that a fan be removed for abusive behaviour at Hazeltine. Of course, the U.S. Team will have huge backing, and while the atmosphere will be boisterous, Stricker wants the fans to be fair. He said: “It’s going to be rowdy. Hazeltine crossed the line at times, which we don’t want to see.”