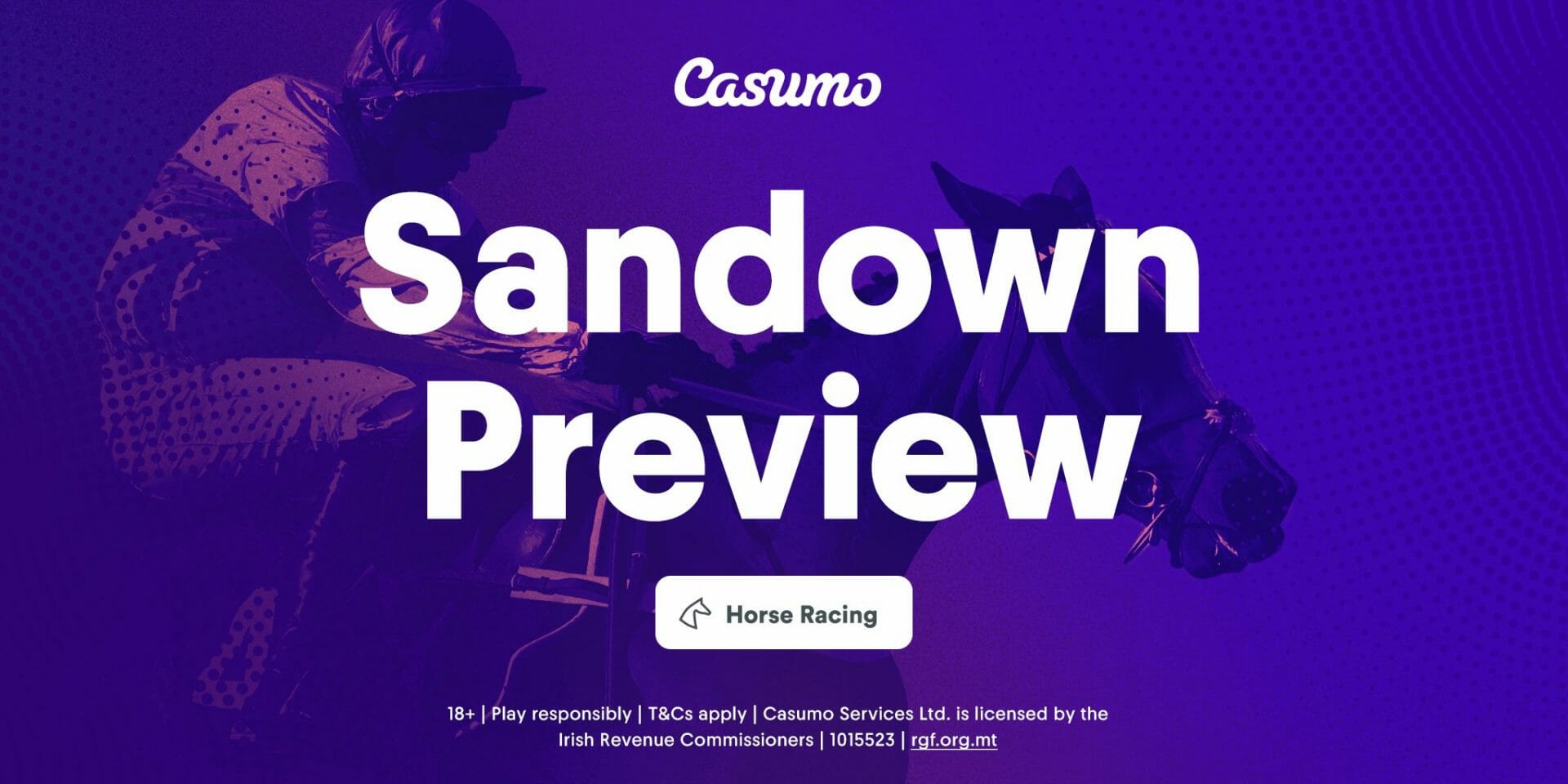 As we head into the New Year the ITV horse racing cameras head to Sandown and Wincanton this Saturday to take in eight races across the two venues.

At Sandown Park there are plenty of betting opportunities with the Grade One Tolworth Hurdle (2.25) the feature – a race that’s seen 14 of the last 17 winners come from the top three in the betting.

Then at Wincanton, there are four competitive betting handicaps to take in – two hurdles and two chase.

To help narrow down the fields and hopefully find the winners – here at CASUMO we give you all the key betting trends and stats ahead of the LIVE ITV races this Saturday 8th January 2022.

CASUMO KEY TREND: 14 of the last 15 winners returned 17/2 or shorter in the betting

CASUMO VERDICT: The Nick Williams-trained MOONLIGHTER was only fifth in this race 12 months ago, but he followed that up with a CD win at this same track on his next run and returns here on a 3lbs lower mark than that win and 6lbs lower than when running in this race last year. The soft/heavy ground will be fine and can be expected to be much fitter for his two runs this season. Harry Cobden catches the eye in the saddle too. Of the others, the Tom George runner Bun Doran continues to look well-handicapped off a mark of 134 (was as high as 160 at his peak) but is now an 11 year-old and has won just one of his last 14 races. The consistent GUNSIGHT RIDGE should run his race again and the form of his recent second to L’Homme Presse has since been franked with that horse winning well again since so it’s hard to crab his chance – he rates the main danger to Moonlighter for me. Numitor is another consistent performer but continues to creep up the handicap and is another 2lbs higher this time after a second at Newbury at the end of November. Monsieur Lecoq needs to bounce back from two average runs, while Paddy’s Poem is back from a break so will need to be spot on against more race fit rivals. Up The Straight, who won well at Plumpton back in October, is interesting back in trip after seemingly getting tired in decent races at Cheltenham and Ascot last time.

CASUMO VERDICT: Some exciting Novice Hurdlers on show here, but it’s the Nicky Henderson-trained CONSTITUTION HILL that’s gone into many a notebook after his 14-length romp on hurdles debut over this course and distance last month. He showed a cracking turn of foot that day to win with any amount in-hand and currently sits as second favourite in the ante-post market for the Supreme Novices’ Hurdle – another win here and he could be challenging stablemate – Jonbon – for the market leaders berth in that Festival curtain raiser. He’s taken to add to the recent Henderson winners in this race in 2012, 2014 and 2015. His main rivals look to be Datsalrightgino, who battled on well to win a nice race at Cheltenham last time out and is sure to be well-suited by the hill here at Sandown – the concern would be that his recent wins have been on much quicker ground. Jetoile has won his last two in decent fashion and could make a bold bid from the front, but those wins have come over 2m4f so you just fear that something with a tiny bit more toe will improve past him. The Moore yard look to have another fair novice hurdler on their hands in Shallwehaveonemore, while it’s interesting that the Newland camp introduce the unraced over hurdles Whizz Kid in at the deep end – he’s a former useful flat winner over in France and won’t mind the ground, it just depends if his jumping holds up. The danger to the Henderson horse though can come from the Paul Nicholls-trained Mr Glass. This 6 year-old has won both starts over hurdles (Chepstow and Newcastle) and we know he stays further than this 2m trip. But, like a few others, I just worry that Constitution Hill might be too pacey for him over this distance.

CASUMO VERDICT: Some old faces on show here for this Vets race, with the minimum age being 9+, but all the runners here are 11+. CD winner, Wandrin Star beat another runner here – Dancing Shadow – by 1 ½ lengths here last time and is only up 3lbs for that. Gwencily Berbas, Indy Five and Final Nudge are the three other recent winners in the field so have to be respected coming here in form, but I think there’s another race in the Venetia Williams-trained ASO. The yard took this prize in 2019 and this 12 year-old showed he’s still loving his racing with a cracking second at Haydock last time out in a similar race. He was beaten only 3 ¾ lengths behind the back-to-form Blaklion that day but is down slightly in trip here, which should help. He’s up 2lbs for that run, but is still very well-treated off a mark of 149, having been as high as 158 only last March. Sir Ivan and Valadom can go well too, but the other pick is the Philip Hobbs runner – ROLLING DYLAN (e/w) – who ran a solid second here last time and gets in here with just 10-5 to carry – last time he had 11-2! The softer ground is okay too (has won in similar conditions) and Michael Nolan, who knows the horse well, is back in the saddle.

CASUMO KEY TREND: 13 of the last 16 runners ran in the last 8 weeks

CASUMO VERDICT: The Gary Moore-trained NATURAL HISTORY (e/w) missed a race in the week but might be worth giving another chance too after running too free in his races recently. He’s clearly got ability and was sent off favourite for the Imperial Cup here last March, but flopped that day. He’s back here with just 10-0 to carry and is rated 13lbs lower than that day too. Mack The Knife is only up 3lbs for a recent neck win at Exeter and can also be expected to have improved for that run as it came off a 242-day break too. Hermes Boy is the other recent winner in the field – also successful at Exeter – but is 5lbs higher here and this looks a better race. The consistent Volkovka is another that should go well, but a chance is taken on the Ian Williams runner – HYDOPLANE (e/w) – who possibly just needed the run back last time at Doncaster when pulled up. He rounded off last season on a high and has won on softer ground in the past as well. He’s down a pound here and in this better race has only 10-2 to carry and jockey Charlie Todd takes off a further 3lbs.

Only 3 previous runnings
3/3 – Aged 7 or 8 years-old
2/3 – Returned a double-figure price
2/3 – Carried 11-8 or more in weight
0/3 – Winning favourites
Trainers Ben Pauling, Chris Gordon and Ron Harris have won this race before

CASUMO KEY TREND: All of the last 3 winners were aged 7 or 8 years-old

CASUMO VERDICT: Not the best of races, so the safe call looks to be side with the horses in-form. With that in-mind, the Anthony Honeyball-trained MIDNIGHT CALLISTO gets the nod. This 7 year-old was a close second at Taunton last month and even though she’s up 5lbs for that is clearly in-form and it’s interesting the cheekpieces are on for the first time too. Regular jockey – Ben Godfrey – who can claim a handy 5lbs remains in the saddle. Kendelu’s winning run came to an end last time at Huntingdon and despite being a few pounds lower looks to be in the handicapper’s grip now. Pittsburg and Mi Laddo can go well too, but after an easy 6 length win last time at Newcastle, the Neil Mulholland runner – PLANNED PARADISE – can also go well. He’s up 11lbs for that success, which looks a bit harsh, but that was only his fourth run over hurdles so should have more to come.

CASUMO KEY TREND: Trainer Sam Thomas has a 75% record at the track with his chasers

CASUMO VERDICT: The Tom George yard are just 1 from 44 (2%) with their chasers at the course so their Casa Tall has this stat to overcome, but he’s been running well this season with a win and two top three finishes to suggest he’s one for the shortlist. In contrast, the Paul Nicholls (26%) and Sam Thomas (75%) yards have better records with their chasers at the track so their entries Grey Diamond and Glajou will be popular too. Desque De L’Isle and CD winner Le Coeur Net are others to note, but the two to play here are BELLE DE MANECH, who was an easy 14 length winner last time, and OUT OF THE TEAR. The former is up 10lbs for that last win but won with a lot in-hand, plus with that win coming here at Wincanton then we know the track is fine. Out On A Tear also won last time out (Catterick) and will need to improve on that in this better race and up 6lbs here too. But has now hit the top two (2 wins) from his 6 runs over fences so could have more to offer – also acts on all ground.

CASUMO KEY TREND: All of the last 5 winners ran in the last 6 weeks

CASUMO VERDICT: Golden Emblem and Getalead are the two proven CD winners in the field so have to be considered, while the unexposed Crossing The Bar seems to be going the right way after an improved third at Ffos Las last time out – that was only his second run over hurdles and should be winning before too long. Mister Sweets, Earth Business and Straight Swap have cases but the two here to play are NICKELSONTHEDIME and BLAIRGOWRIE. The last-named comes from the Nicky Henderson yard and has only had two previous runs over hurdles. The last was a fair third at Uttoxeter and the longer trip looks a good move – James Bowen, who Henderson often turns to, gets the ride. Nicklesonthedime is the other pick, and this Kayley Woollocott runner ran really well to be a close fourth last time at Exeter and the form of that run has been franked since with the winner – Tip Top Cat – winning again. He’s only a pound higher and the useful Fergus Gillard takes over in the saddle to claim 3lbs.

CASUMO KEY TREND: 8 of the last 10 winners were aged between 7-9 years-old

CASUMO VERDICT: Several of the six runners here have a bit to prove. The Paul Nicholls yard won this race last year so their Mont Des Avaloirs will be trying to follow that up. But is back from a 455-day break so even though coming from this powerful yard is sure to be well-tuned up I’m still happy to look elsewhere. Stolen Silver looks a safe option and is arguably the one to beat based on his runs this season and this will be easier than the Grade One Henry VIII Chase at Sandown last time. The slight worry though is that he’s won just one of his 6 runs over fences and I’m not sure this step up to 2m4f will suit. On his best form, Slate House would be a huge player and has dropped to a mark of 134 – that’s 14lbs lower than just 2 years ago. But he’s now not won since 2019 and 8 races. However, a chance is taken on the Emma Lavelle runner – KILLER CLOWN, who was running well last time over 2m6f before getting tired. He’s now had two runs this season and two since a wind op over the summer. He’s also 5lbs lower than when returning this season and has run well with give underfoot in the past too. With the tongue-tie also on to assist he looks ready to kick on again and it would be no shock to see a return to form from this 8 year-old. Of the rest, Notre Pari can do best of the others.