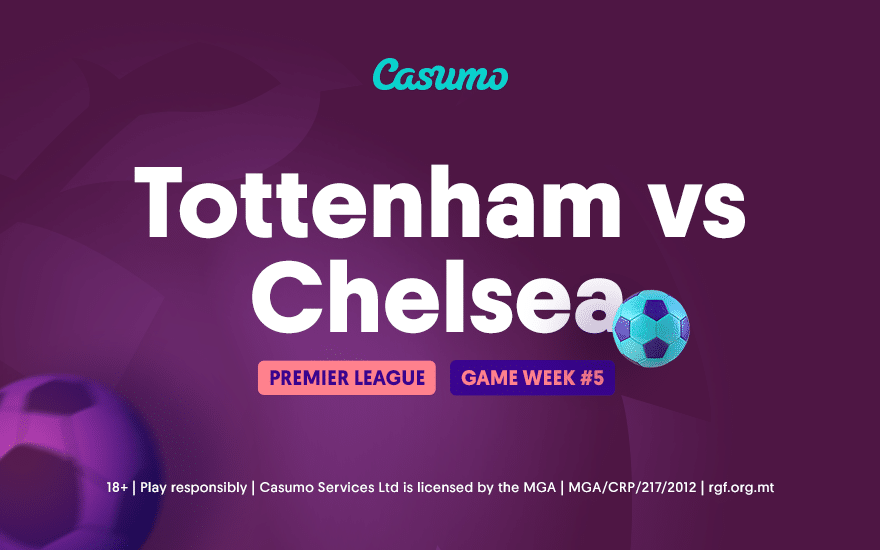 Sunday evening’s 17:30 kick off is undoubtedly the pick of the bunch in matchweek 5 of the Premier League. To dare is to do is the Spurs way, apparently, but we wonder… who dares stop this impressive Chelsea side?

Tottenham went from top spot to seventh spot after that capitulation by Crystal Palace, the result which was the shocker of matchweek 4. Chelsea, still undefeated, share second spot with Manchester United… and while it is not relevant to inspect the league table with great detail just yet, viewing the teams’ consistencies is important.

Spurs started the season with three straight 1-0 victories, but their 3-0 defeat to Palace wiped out their goal difference, took off the shine, and lumped a pile of pressure on new manager Nuno Espirito Santos.

Chelsea have been cold this season, ice-cold both in the league and in Europe. They have only dropped points against Liverpool, in a match where they were reduced to ten men for the entire second half.

That draw against Liverpool is the only game they have conceded a goal in so far, and they’ve hit nine league goals in a good run. Leading the line is of course natural born goal scorer Lukaku, who has been cool, calm and collected since his sensational return to Stamford Bridge. His off-the-ball movement has been calculated, he has dominated the opponent’s boxes, bullied defenders, picked out passes, and helped himself to four goals in all competitions.

Chelsea have scored the first goal in four of their first matches this season and have scored in the first half in four matches too. The Blues are also undefeated in ten games in a row, so this will be a tough game for Spurs… who have won their last four home matches. That feat does give them some hope, but with Lukaku on such form, its hard to bet against his side.

Thomas Tuchel has said Lukaku is just the thing Chelsea needed, and when a team is consistent at the back and powerful going forward, well… the word Champions and favourites often get thrown together.

This game is being dubbed as GameZero as SkySports and the two teams combined to make this game the very first elite game of football with zero emissions as awareness is raised for a greener, cleaner environment.

Under Tuchel, Chelsea have kept 23 clean sheets… the most clean sheets in Europe’s top five leagues since his arrival. They have a depth in midfield which is frightening and yes, it is difficult not to praise this side.

Spurs will have to do something extraordinary to beat Chelsea . They were pathetic against Palace, with Harry Kane failing to even touch the ball in the opponent’s box for the first 90 minutes of his entire Premier League career. That is extraordinary, and given Chelsea’s defensive record this season, we think he’ll struggle on Sunday too.

While it is natural to laud a new signing, a crucial signing was Edouard Mendy, who has now played 50 games for Chelsea. Within those 50 games he’s somehow kept 29 clean sheets, helping his team to win 31 games. His save percentage is at 79% and he scooped up the UEFA Goalkeeper of the Season award for last season. His impact has been incredible and he is a huge part of what makes this Chelsea team so good.

It’s hard to look beyond a Chelsea win here, and we’re in for a Sunday evening special.