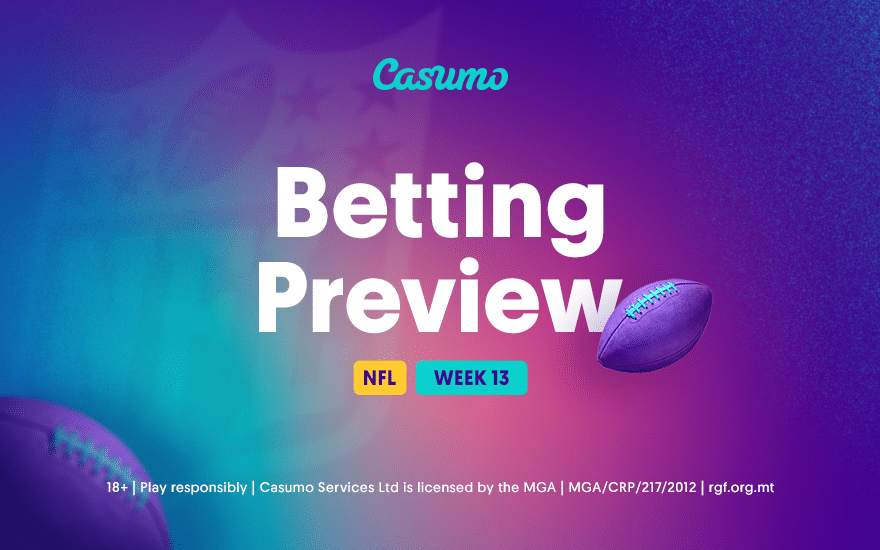 NFL Week 13 brings us closer to the Superbowl!

The NFL is fast approaching crunch time and for some teams, there is still a lot to play for – and with that, little room for error. With the NFL playoffs coming into view, there is plenty to get excited about and there are some cracking games on, including the Kansas City Chiefs vs the Denver Broncos, the San Francisco 49ers vs the Buffalo Bills and the Green Bay Packers vs the Philadelphia Eagles. In this preview, we will assess the latest odds and injury news for these games.

Kansas City Chiefs hoping to twist the knife in deeper

The Kansas City Chiefs have enjoyed an exceptional campaign to date (10-1) and they extended their winning streak to six with a 27-24 win over the Tampa Bay Buccaneers in Week 12. Quarterback Patrick Mahomes stole the show with a stunning display as he threw for 462 yards with 3 touchdowns, while wide receiver Tyreek Hill made 13 catches and threw for 269 yards. After one quarter, the Chiefs had stormed into a 17-0 lead.

Overall, the Chiefs have been exceptional, especially on the road where that record stands at 6-0 – and if you look back to last year, it is 9-0. Against divisional opponents, they have gone 30-3 and that dates back to November 2015. The Chiefs will have fond memories of their clash against the Broncos as they ran out 43-16 winners in their previous meeting.

We’re losing track of the stats that make us go ?@PatrickMahomes | @Chiefs pic.twitter.com/dsuW3AlaSV

Broncos need to buck up their ideas in offence

It is fair to say that the Broncos haven’t performed well defensively as they have allowed 341.4 yards per game and they are 19th in stats when it comes to interceptions, having made just eight this campaign. But the Broncos have let themselves down in attack as they rank 31st in the NFL, averaging 19 points per game. While Melvin Gordon has been the most prolific for the Broncos with six touchdowns, they are coming off the back of a 31-2 mauling at the hands of the New Orleans Saints last weekend and need to bounce back.

Broncos coach Vic Fangio has an injury concern going into the clash with the Chiefs as he admitted that Phillip Lindsay “tweaked his knee a little bit” in the defeat against the Saints. Lindsay was forced off early and he is touch and go to be fit in time to face the Chiefs. Fangio of course will be monitoring Lindsay and assessing the situation before making a decision.

The Buffalo Bills have looked formidable all season. Their record stands at 8-3 and they are in a great position to claim their first AFC East title since 1995. Although the AFC East leaders gave turnovers in three consecutive possessions in the fourth quarter last weekend, they had enough to see off the Los Angeles Chargers 27-17. While the scoreline was perhaps closer than it should have been, the Bills set up the victory in the first half as they raced to a 24-6 lead.

Bills have to tidy up sloppy mistakes against 49ers

There is still room for improvement against the 49ers and perhaps it is the offence that is still somewhat suspect. Bills quarterback Josh Allen was slightly disappointed that the game against the Chargers was as tight as it was. He said: “On the offensive side of the football, we can do a lot more to help us out. We know that, we’ve got to be better, and I’ve got to be better in taking care of the football.”

Whereas from a 49ers perspective, they will be hoping to string together a sequence of results. After a bruising defeat only a few weeks ago to the New Orleans Saints, the 49ers responded last weekend with a 23-20 defeat to the Los Angeles Rams. Now the onus is on the 49ers to go on a run until the end of the season.

The 49ers head coach Kyle Shanahan is still retaining hope that his All-Pro tight end George Kittle is back on the field before the season concludes. Kittle broke a bone in his foot last month against the Seattle Seahawks and Kittle is optimistic about returning to action soon. Recently, he admitted he had adopted a more “positive mindset” and that he thinks he will return to action sooner rather than later.

Your AFC Defensive Player of the Week: @AJKlein47

The Green Bay Packers (8-3) have been flying this season and they sit atop of the NFC North. Although they fell to a 34-31 loss against the Indianapolis Colts, they responded in style with an emphatic 41-25 win over the Chicago Bears. And the Packers completed a deal this week for wide receiver Tavon Austin. With Austin coming in, this paved the departure of Darrius Shepherd. Austin was with the Rams for five seasons and two with the Dallas Cowboys.

And they come up against the Eagles, who have been stuck in a real rut, having recorded four defeats in a row. The Packers are short favourites with Casumo, who have priced them at -417 to take the victory which includes Overtime, whereas the Eagles are longer at 320. Quarterback Carson Wentz has been much-maligned this season and he needs to get back to his best if the Eagles are going to get something against the Packers.